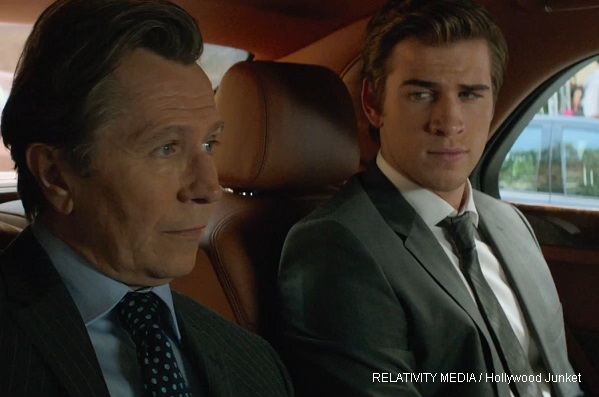 The competition is cut-throat in “Paranioa”, a new thriller, drama film directed by Robert Luketic. Good attempts to get rich the “right” way. Fails. Turns bad to get rich. Succeeds. Becomes trapped and tricked by those who help him become rich which endangers his lives as well as everyone he cares about. Only two ways out. Get killed or trick the tricksters. That, ladies and gentlemen is “Paranoia” in a nutshell. Or perhaps 50 Cent said it best, “Get rich or die trying.” It’s a very familiar story but the actors turn what could be a very hum drum seen it before plot into a pretty exciting thrill ride.

The Australian charmer Liam Hemsworth plays the lead Adam Cassidy in a very talented ensemble of Hollywood heavyweights and scene stealing up-and-comers. Adam simply wants to live a better life than his now ill father Frank Cassidy had. Frank is played by the legendary Richard Dreyfuss who does not have a ton of camera time but when he does get some he makes every moment memorable. To me he was the best actor in this film.

Frank has had a series of very expensive surgeries that Adam can not afford to pay for. Adam believes he is about to get a promotion but the opposite happens. He is fired. After being fired and splurging with the company credit card on a nite on the town with his coworkers and also now fired friends he is caught by the owner of the company Nicolas Wyatt (Gary Oldman). Mr. Wyatt gives Adam two options. Go to jail or earn the money he needs and live the life he always wanted by doing one small illegal job. Now of course we always know it’ll never be just “one job” but I’ll come back to this later. Adam chooses to accept the job and the flashy lifestyle that comes with it.

The job is to actually work for the rival company of Wyatt’s which is ran by Jock Goddard (Harrison Ford), former boss of Wyatt. Once at Goddard’s company Adam is supposed to steal the plans of their next big innovate project and hand them over to Wyatt. In the meantime he falls in love with one of Goddard’s top employees Emma Jennings who is portrayed by the beautiful Amber Heard… If you haven’t HEARD. (Sorry. Couldn’t resist. I’m corny like that). So long story short once he steals the plans it’s not enough for Wyatt and Adam refuses to do more until he realizes his life and the lives of the people he cares about are now at stake and he has no other choice.

There are a few cool twists and turns that I won’t spoil for you but you can kind of see where this is going. AND THAT my friends is the problem I had with this movie. While it did move quickly (with a running time of about 106 minutes) speed can not erase boring. It’s like fast forwarding through a movie you’ve seen 20 times. Just because it doesn’t take as long doesn’t make it not boring.

The first 30 minutes were very predictable. The next thirty minutes were fairly predictable. The last 45 minutes were not as predictable but couldn’t make up for all the lost time. What did make up for it was the acting though. Every role was cast very well. Lucas Till (representing good ol’ Marietta, Georgia..WHOOP WHOOP!) was perfect as the kinda nerdy and very intelligent best friend “Kevin.” His love interest Allison played by Angela Sarafyan was just as good. Honestly I wouldn’t mind a spinoff sequel based on these two. Julian McMahon, who I’ll admit I’m biased about because of “Nip/Tuck,” was great minus one or two very cliche lines. That brings me to my next point. The dialogue was pretty incredible most of the time and coming from someone who can usually predict more than a few lines it kept me on my toes for the most part.

There were a few cool quotes that people might use against their enemies soon like “don’t let your lunch get cold” which was delivered in a stone cold chilling way by Harrison Ford. The directing was very music videoish which the younger crowd might enjoy but I assume the older crowd won’t. Like there was a night scene that did the whole blurry vision fast cars and lights thing that a Madonna video did about 10 years ago. Also there were a few unnecessary closeups of objects that we were already paying attention to. Like for instance there was a scene where Adam needed to Emma’s hand-prints on a spoon. We watched him look at the spoon after the hand-prints were on it. Then, we watched a close up of the spoon for like 5 seconds as if we didn’t just see what happened. I title change might’ve done the movie well too as Adam was not really paranoid at all. He was being watched and his life was in danger. That’s just called being alert and afraid last time I checked. “Alert & Afraid” might’ve not done so well at the Box Office though. Or, it might’ve done better. I’m writing this before we know how the movie does so I guess we’ll just have to wonder if they needed my title or not. Or maybe the spinoff starring the nerdy couple can be called “Alert & Afraid.”

All in all, I would still recommend this movie. If for nothing else other than to watch a few legends on screen (Gary Oldman, Harrison Ford, and Richard Dreyfuss), and a few people who should be household names soon but aren’t right now ( Lucas Till and Angela Sarafyan). It’s not a MUST SEE but if you’re a big thriller fan or just want to grab it at the Redbox in a few months I suggest checking it out.

Oh by the way I almost feel obligated to mention Josh Holloway BKA as “Sawyer” from Lost is in this film too… He just got LOST in the movie and his role wasn’t that memorable. Okay. No more corny jokes I swear…til next time! 🙂