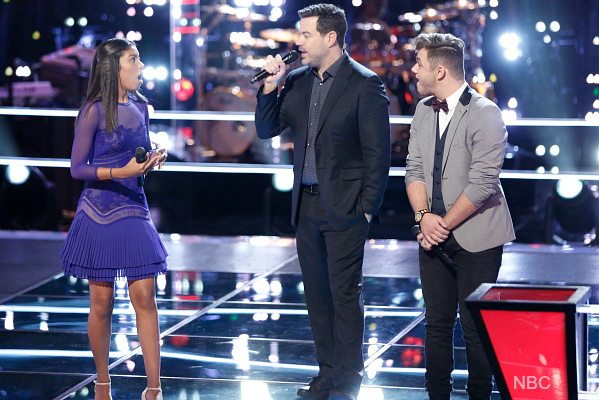 Now that “The Voice” coaches Adam Levine, Gwen Stefani, Alicia Keys, and Blake Shelton have their first attempts at the creation of their teams, the show underwent Battles this week where like singers were forced to do combat with each other inside the ring of “The Voice” stage. 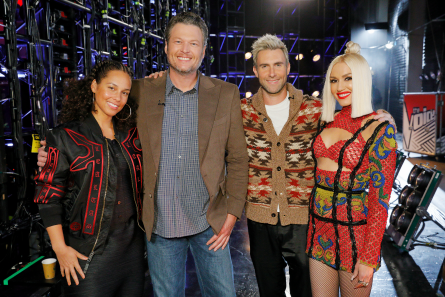 At the close of some epic Battles, a few of the singers were pleasantly surprised with a team switch after getting stolen by a competing coach.

Blake Shelton made more comical jabs at Adam. This time at the cost of his bleached blond hair calling Adam Zach Morris (“Saved by the Bell”) and 80’s singer Billy Idol.

The fist Battle of night one was Team Blake’s Brennley Brown vs. Lauren Duski. 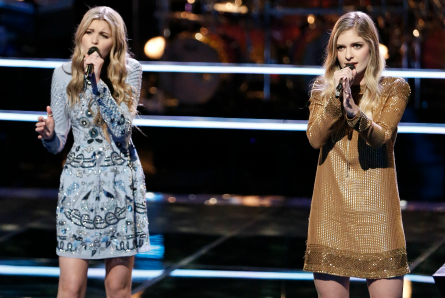 During rehearsals, Blake told Lauren that she needed to “pour a little bit of anger” into the song “Better Man”. Adviser Luke Bryan compared Lauren to Karen Fairchild from “Little Big Town”. BATTLE WINNER – LAUREN. Gwen stole Brennley who chose her over Adam. STEAL – Gwen stole BRENNLEY who picked Gwen over Adam who also tried to steal her. 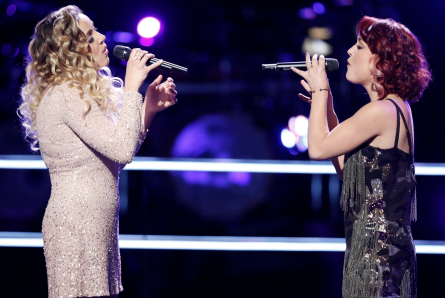 Casi was over the top excited about Luke Bryan because she wants to walk down the isle to his music. Blake said both Casi and Ashley have a classic Country voice and there’s only one spot on his team for that. He gave them “How Blue” song. Casi’s strategy was to sing her part of the song as much her own as possible to make her stand-out from Ashley. Blake called it his “toughest battle.”

After their Battle performance, Blake told them he needed to get them both out of each others lane, and hoped that they’d both stay on the show since the other coaches are dying to beat him with a Country artist. The BATTLE WINNER was CASI. Blake said she has an “electric energy” when she’s on stage.

Adam pushed his button to steal Ashley. Then Gwen and Alicia followed. Adam pointed-out that he mentioned that he thought Ashley won the Battle. Gwen promised to help Ashley on how to work the stage “as a girl.” Alicia reminded Ashley that Adam was the only coach who didn’t turn during her Blind Audition. STEAL – Ashley chose TEAM ALICIA who said she wants to blend soul and Country music. 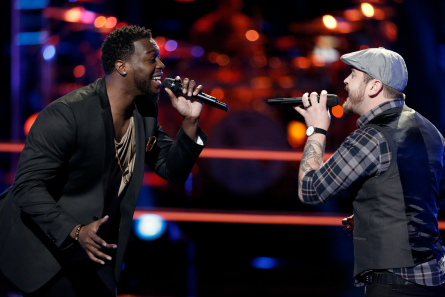 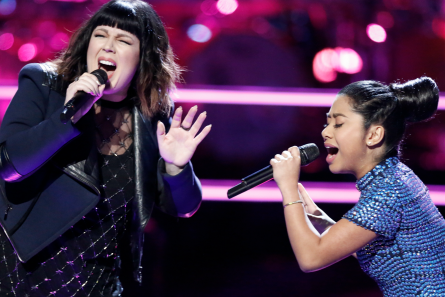 The coaches talked about how small Anatalia is. Blake said when Missy sang, it was undeniable. Coach Alicia said Missy was a beautiful, powerful voice and loved how the Battle ended-up. The BATTLE WINNER was ANATALIA. Alicia said Anatalia “is like a female Bruno Mars.” 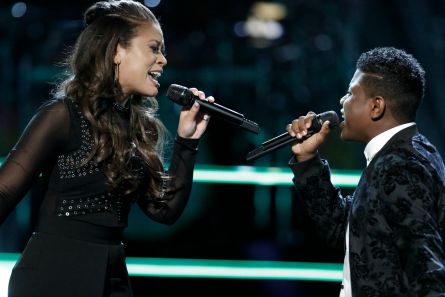 Alicia gave them David Guetta’s “Titanium” song to take them outside of their boxes. Felicia told Alicia that she used to sing “Titanium” wen she was sick with cancer and going through chemotherapy. Gwen chose Quizz because he’s only 13 and that blew her mind. Adam said there were moments where Felicia really “blew through.” Blake chose Felicia’s “more developed voice.”

Coach Alicia chose the BATTLE WINNER as QUIZZ. She chose him for his “innocence and vocal prowess.” STEAL – Blake stole Felicia. He repeated what Adam said in that the only thing that she doesn’t have going for her is that she’s not 13. 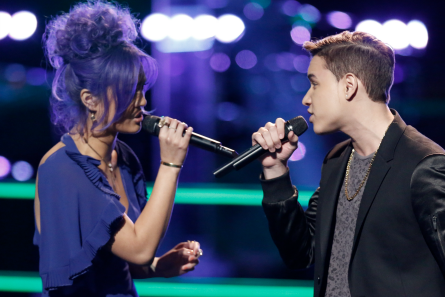 John Legend remembered working with Gaby. It was a challenge for John Legend and Adam to help Gaby & Mark to master “Pillowtalk” song as a duet. The final product on stage was that they pulled it off perfectly. Blake said “it was so good.” He said Mark felt the emotion and syncopation of the song more. Gwen also chose Mark. Coach Adam said there’s something about great singing when it happens, it happens. The BATTLE WINNER was MARK ISAIAH. Mark reacted that his dreams are coming true. Gaby didn’t get stolen, and Adam encouraged her to keep going. 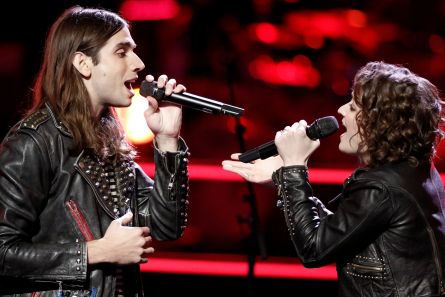 They sang “I Drove All Night” by Celine Dion who is their adviser. Gwen said the deciding factor would be stage presence. After their Battle performance, Adam called them bad-asses. Coach Gwen said they made the song their own, like it would be on the radio. She called Johnny “the star” with his stage presence and unique. The BATTLE WINNER was JOHNNY GATES. Gwen said Johnny is “super gifted.” 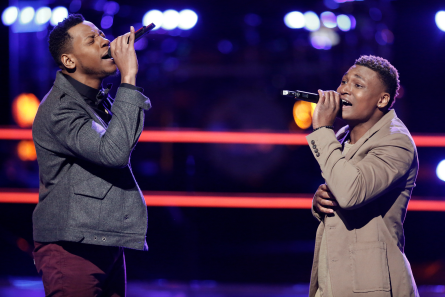 They were over the moon about DJ Khaled being their adviser. They sang “Adorn” by Miguel. Alicia picked the song because it has a classic feel, yet still new. Gwen called them both gifted. Blake predicted that Chris will be in the finale. Alicia told RJ that she felt his emotion when he sang. The BATTLE WINNER was CHRIS BLUE. Alicia chose Chris because he has a versatility and they’ve just scratched the surface with him. 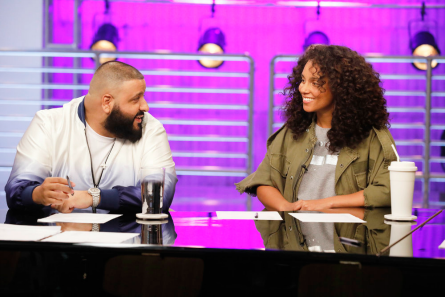 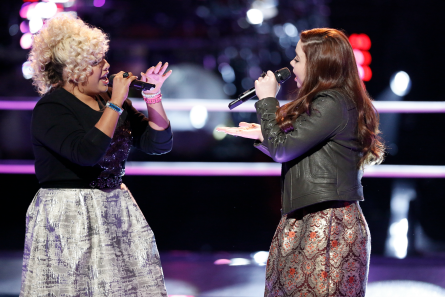 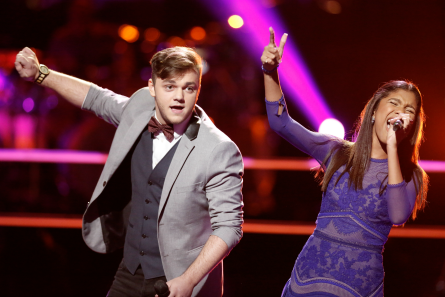 Blake gave them “Walking on Sunshine” to sing. Luke put the two of them on an even playing field. Blake advised them to “stand-out from the crowd.” At 15-years-old, Aliyah is one of the youngest this season. She wants to prove to Blake that she deserves to be there.

After their Battle, Alicia said “the chemistry was amazing”. Adam called Dawson a new discovery for him and would keep him. The BATTLE WINNER was ALIYAH MOULDEN. Blake said there’s something special about they way Aliyah performs.

STEAL – Alicia stole Dawson just as he was about to leave “The Voice” stage. She said she felt an energy that was really pure and strong from him. She also noted his popularity with the women in the audience.