Rather Get 100 Items For $100 Bargain Shopper Roshanda MY SHOPPING ADDICTION Interview! 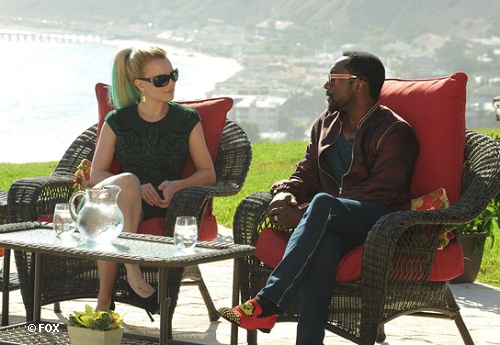 Simon, Britney, Demi and LA Explain What The X Factor Is:
Simon, said, “I think it changes year on year. What I was looking for last year is not necessarily what I’m looking for this year. So timing is part of the X Factor. Lady Gaga ten years ago I don’t believe would have worked. Five years later it obviously works. Timing, taste, charisma, talent, originality, confidence, being unique – you wrap all those things up – that’s what you look for.”

L.A. Reid – “The X Factor is a combination of many many things. It’s the ability to be loved or hated. To be polarizing to be noticed. To not walk into a room, but to arrive. It’s the difference between the light being on and the light being off. Certain people when they walk into a room they arrive and it feels like a spotlight came on them. Those people have the x factor.”

Demi- “something that you can’t explain. It’s a glow and a really strong presence. When they step onto the stage they captivate your full attention . You can’t stop watching them and you can’t stop listening to them and you want to see more of them. It’s exactly what Brittney Spears has. Which it’s such an honor to work with her on this show where we are looking to find people who have exactly what she has.”

Britney – “It’s that gene c’est que that thing that you really cant’ put your finger on that punches out at you that makes people scream and makes people mesmerized by you.”

“The Young Adults” Are Revealed:
“This is one category where we’re going to lose some really good people,” said Simon. Only six singers were selected. They were: CeCe Frey, Willie Jones, Jennel Garcia, Nick Youngerman, Paige Thomas, and Jillian Jensen.

The “Over 25s” are Revealed:
“It’s a talented category, but only six can make it” said Britney. These six are: Jason Brock, Daryl Black, David Correy, Tara Simon, Tate Stevens, and the final place went to Vino Alan. Those that were sent home included: Freddie Combs, Jeffrey Gutt who said it was “their loss” and “I could have won the show.”

“The Groups” Are Revealed:
The groups that made it through to the judge’s house round are: Sister C, Dope Crisis, Emblem3,

“The Teens” Are Revealed:
Simon said, “The final category is the teens. I don’t think any of us are looking forward to the ones that didn’t make it that it’s over.” The ones that made it are these six singers: Diamond White, Beatrice Miller, James Tanner, Carly Rose Sonenclar, Reed Deming, and Arin Ray.

After realizing that there was just too much talent to turn away, the judges decided to call-back a few of the teens to create groups in order to push them through to the judges house round. These groups created were: Boy Band, Girl Group, and Rap Group.

The Judges Get Their Assignments:
The producers of “The X Factor” decide what groups the judges will get. “The group that I really, really want is the 17-24” said Demi. Britney said, “I really want to work with the kids. It’s so profound to find that kind of talent in such young people. It’s such a gift”. She then receives a phone call telling her that she indeed get the “Teens Category.”

Simon is mentoring “The Groups”. He stated, “It’s not the easiest category. It doesn’t matter. I’ll make the most of them. I’m happy for them”, said Simon.

The category that Demi gets is the “Young Adults”. She said, “I’m 20, I’m right in the middle of that age group. I know how to work with them. I have the winning team.”

L.A. Reid was not happy when he found out that he was mentoring the “Over 25” group. He said, “everyone has got to leave. I don’t want to talk to ya’ll. Not the overs. Everyone else I’d be happy with”

Britney Spears and Will.i.am Welcome Teens:
The teen singers arrived to a beautiful home in Malibu, California. After arriving, they guessed the judge as being either L.A. Reid or Britney Spears. They were excited to see when Britney walked out to welcome them. “I think you guys are working really hard, but you’re going to step-it up a notch. There’s six of you and I can only take four of you.” To help her she brought her friend Will.i.am from The Black Eyed Peas. “You guys have come a long way. Today is a very important day so you have to go out there and give it your all,” said Will.i. am, then the young teens were sent off to rehearse.

Carly Rose Sonenclar: Possessed?
A daughter of a graphic designer and a copy writer, Carly Rose Sonenclar is a thirteen year old who wants to be a “super star” from Providence, Rhode Island. She said she is worried if they aren’t what they are looking for then she’ll not go through to the live shows. Britney advised Carly, “take the competitiveness and put it into your hear when you perform and it could come alive even more.” Carly sang Karmin’s “Brokenhearted” to Britney and Will.i.am. After Carly’s performance, Will.i.am reacted by saying, “She’s possessed. She’s like a little caterpillar and you think she’s going to turn into a butterfly? Dragon, burning up and scrotching the town.” Britney said “she’s a very talented young girl. I’m kind of scared she may not be able to cope with the pressure of everything.”

Simon and Marc Welcome The Groups:
The contestants go crazy when they see Simon Cowell emerging from the chic house in Miami where they were sent to train for “The X Factor” competition. Minutes later, Marc Anthony also emerged from the home. Marc Anthony said he understands what they are going through because he’s been there and that this could be the beginning of the rest of their lives. Simon reminded them “these are now your competitors. So you have got to be incredible.”

Eliminated contestants, solo artist Lyric Da Queen and group One4Five were called back and placed together to create “Lyric 145” and compete on to the next round, the judges house. Lyric Da Queen said that “there’s nothing that you won’t do to make what you want to happen, happen”. One4Five told Simon that he found a “female version” of them in Da Queen. They performed for Simon and Marc Anthony “Party in The USA”. Marc said “She is a super-star”, and they both “love the look.”

LA Reid, Justin Bieber and Manager, Scooter Braun Welcome “Over 25s”:
The group guessed that they were going to L.A. Reid’s house or Demi’s. After arriving to the swank house, they soon learned that it was the house of LA Reid’s. “I can’t say that there’s really anybody that really stands out for me in the category. So, I’m not happy. But, I’m still planning on winning,” said Reid. He told the group that he now has to figure out how to get one of them to win. He brought over Justin Bieber and his manager Scooter Braun to motivate and inspire the singers. Bieber said that people told him he as “too young” when he was starting out. He said, “you’re never too young or too old”.

Jason Brock – Will He Make You Cry?
Thirty-five year old Tech Support Operator said, “I want L.A. to really believe in me. I want him on my side. I do be one of the ones he wants to keep and that he thinks really has a chance.” He said that his family told him that there are people that can sing better than him. He sang “Big Girls Don’t Cry” to L.A. Reid and Justin Beiber and Scooter. “That was a really strong vocal performance” said L.A. Reid. Bieber said “He didn’t hold back at all. I think that he gave it everything and that showed.”

Jillian Jensen Defies Gravity:
Demi Lovato mentors Jillian. Lovato said “I think that you have an incredible voice. When you perform it’s not just about the voice, it’s also about your facial expressions when you sing. Don’t let it mess-up your performance because you have really stiff competition.” Jillian put on her best face and sang “Gravity” by Sara Bareilles. Nick Jonas said he thought that she was sexy. Demi said she was afraid that she took her advice too seriously and gave fake emotions during her performance.