This season, for the first time ever, “The Masked Singer” has attached words to the costumed masks categories instead of letters.  Those categories are:  Good, Bad, and Cuddly.   Each celebrity sleuth panelist is committed to a particular category.   Ken Jeong and Robin Thicke are Team Cuddly.  Nicole Scherzinger is Team Good, and Jenny McCarthy is Team Bad.

A Mask from each category will compete against each other.  Fore example,  Mask competitors were “Firefly” (Good), vs. Cyclops (Bad), vs. Thingamabob (Cuddly).  Two more Groups will be introduced after them that the sleuthing panelists had yet to see.

Fans can also keep in mind that there are some giveaways and important clues within the first teaser released by “The Masked Singer.”  Watch HERE! 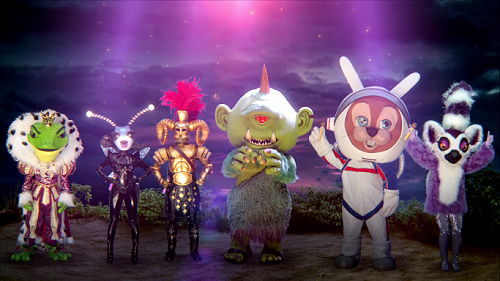 THE MASKED SINGER season 7 clues in the teaser. 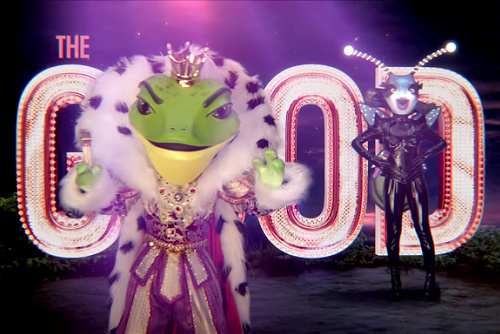 Unlike a number of Masks, Firefly Mask most likely is an actual pro singer and knows how to work a room.  During a portion of her performance, Firefly Mask went up to a young boy in the audience and made a connection with him while singing to him.  She sang “Attention” by Charlie Puth.  Ken Jeong said that was “the most beautiful picture” he’s seen in Masked Singer history.

The Cyclops Mask is pictured in the newly released teaser and is part of “Bad” category.  Robin Thicke stated that Cyclops exudes romanticism and is a gentleman.  In a prior week’s taping, Cyclops sang a song that made Ken Jeong cry.  During a taping, Cyclops sang “Fame” song.

Cyclops Clues:  Fiddle (this clue threw everyone off),  compass, numbers 5, 7, 15   Some of the sleuthing guesses were:  Dave Baptiste (Ken), Dax Shepard (Robin). Robin later changed his guess to Kevin Smith. Cyclops said his eye hole was where his “soul patch” is.  So, that means he is shorter than he appeared in the costume. That was why Robin changed his guess from Dax Shepard to Kevin Smith. 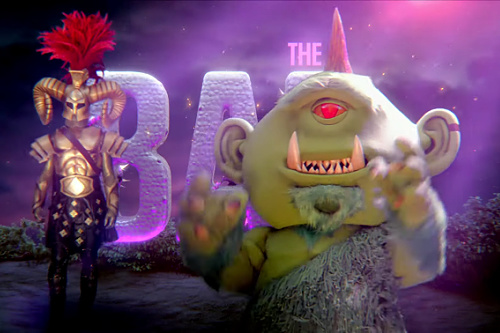 THE MASKED SINGER season 7 Cyclops Mask is in the “Bad” group.

Thingamabob mask, (yet to be revealed in any of the teasers) is very similar to Whatchamacallit Mask from season 4.  In fact, Robin Thicke caught himself calling Thingamabob, “Whatchamacallit” a couple of times!  Thingamabob Clues included: Hotel California, tackle box, and a Shield.  Nicole said she has Polynesian (Hawaiian) relatives who have smooth soulful voices like his.    Some Guesses were:  Dennis Rodman (Nicole),   Liam Hemsworth (Ken), Michael Strahan (Jenny), T.J. Watt (Robin)

The audience was given stuffed animals to throw onto the stage at the end of Thingamabob’s performance.  We’re guessing because Thingamabob is in the Cuddly category.  Thingamabob sang a lot of ballads before his uptempo song during the taping that we attended.

There will be a FIRST EVER “The Final Showdown” host Nick Canon announced.  The panel said everyone had “finale energy.”  Another change that was noticed was the panel didn’t have any first guesses from the vault.  It didn’t seem that they would be competing for the “Golden Ear” trophy either.

During one segment of the show, the three masks performed together.  They sang James Brown song “I Feel Good.”

It sounded like the celebrity panelists made reference to what could be a  new segment of “The Masked Singer” which will show the celebs in their masks looking into a mirror with their costumes on for the first time and getting their reactions.

“The Masked Singer” panel talked about some of their previous failed jobs.  Robin Thicke said he auditioned for Simba in “Lion King”  when he was around 7-years-old.  Jenny McCarthy said she spent seven years selling Polish sausage.  She also remembered a local commercial she did for Frank’s auto shop.  Nicole said she once auditioned to play a toothpaste.  She didn’t get the part.  Ken said he was doing a lot of school work and never thought he’d be here 30 years ago.  Robin also said the first thirty years of his life he spent being selfish.  After having kids, it has changed everything for him.

“The Masked Singer” season 7 premieres Wednesday, March 9th on FOX, and a special preview episode airs before that on Sunday,  February 20th.