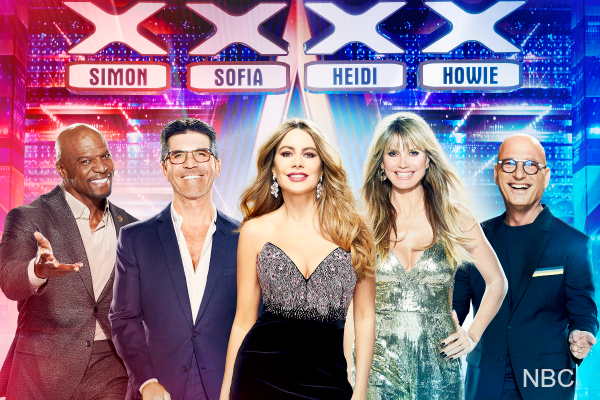 In contrast to his usual entrance, “America’s Got Talent” (AGT) judge and creator, Simon Cowell cruised by fans in the audience without stopping to shake hands. He decreased the number of contacts, only touching fans in the vicinity of his judge’s chair.

During AGT tapings, Cowell is known to typically take twice as long as other judges – Heidi Klum, Howie Mandel, Sofia Vergara, in his theater walk-way entrance due to his personable practice of stopping along the way to shake hands with a number of fans. The particular film date that Hollywod Junket attended was one week before Corona Virus was declared a pandemic. We’re sure the fact that a virus was lingering at that time, curbed Cowell’s normal behavior.

Luckily a family of super-fans made it into the audience that day before the production halt. A couple with their therapy dog Mona marked their 100th show visit to AGT that day.

Just two weeks after that, “America’s Got Talent” paused production. Then came back to finish-up auditions without an audience, according to Instagram posts from Heidi Klum and new judge Sofia Vergara. This most have been an excruciating decision for producers, being that the AGT audience serves as the “fifth judge.” During the country-wide lock-down orders, AGT judge Howie Mandel, who suffers from OCD, stated in a televised interview that the stay-at-home orders is in his comfort zone. Mandel stated that in his line of work, “the comedy is free.” It’s the getting out of the house, and getting to the venue that is the real work for him.

Mandel shared his OCD illness with a young contestant who auditioned on this day. He recognized the fact of the real struggle in just physically being there on the stage.

New judge this season, actress Sofia Vergara, took to the judges table as well as can be expected, making reactionary comments to the acts with some humor and interacting with the audience as much as possible in between takes with smiles and waves to fans. It was said by host Terry Crews that Sofia takes two hours of hair and makeup. “This is not all natural,” stated Sofia.

During our set visit, we saw the typical over-the-top talented performers, some not so talented, but entertaining and believe it or not, two acts that were indeed something we and the judges had never seen before. Along with inspirational acts as well. We also got the privilege of witnessing one contestant who earned a Golden Buzzer. Why is AGT the “biggest talent show?” Because, as Simon stated, for the Top 10 contestants, “it’s genuinely life-changing.”

A new revelation that we discovered during our visit was that apparently, the judges have a list of song options for the singing acts. This was evident when Cowell asked for several singers to sing another song that was on this list he was given that was sitting in front of him. Another treat this season, it is the first time the show used Red Cameras. These were used sparingly on the judges as they commented after each act.

First-up was a twelve-year-old boy from Tawain who played a yucolali.  It was evident that the young boy looks up to Jimi Hendrix while hearing him play the yucolali plugged-in electrically.  This was an act that was different and as Simon put it, something they haven’t seen before.  Simon added that the young musician was up there in the same stratosphere as the late great artist/guitarist Jimi Hendrix.

Molly Berry is 19-years-old from Santa Clarita.  She sang “Jealous” song by Labrinth.  She dedicated the song to a woman whom took on a mother role and mentored her to come out of her shell, Molly stated.  Simon was a tough judge on her, with a “no” vote.  He explained to her why.  She was among other singers whom they had already seen before her who were much better than her.  Simply put, Simon said it wasn’t “good enough,” and looking at the competition down the road during Judge Cuts, Simon said he wouldn’t fight for her.

Emerald Jordan Wilkes is a 13-year old-contortionist.  She said her interest started when she was three-years-old and got into pageants.  How does one go from pageants to contorting was a question Howie Mandel asked.  Emerald said she was also in gymnastics when she first started contorting, and has to practice every day to train her body to do it.  Simon advised Emerald to “do better than Sophie Darcy,” a past AGT contestant.  He told her that he likes her and thinks the AGT viewers will like her too!  Sofia commented that she wished she could do the contorting like her.  Howie yelled to Sofia that her husband wished that too! Heidi reminded Howie that it’s a family show and urged Emerald to ignore him.

Michael is a 40-year-old male singer who came out onto the stage dressed to the nines in an all white suit bedazzled by himself!  He sang a gospel type song which he didn’t get half way through before Simon threw up his hand to stop him.  Before that, Howie could be seen chatting to Simon about something from across the judge’s table. Simon revealed that Howie mentioned that his act was very Karaoke- like.  Simon requested the man to come back later, less dressed-up and to sing a big, more familiar song.  Something by Mariah Carey.  Michael agreed.

Newhall brothers, from Canada, said they get compared to the Jonas Brothers.  There’s also three of them.  The brothers who are 18, 21, and 23 sang an original song.  Like the act before them, the were also stopped in the middle of their performance by Simon.  He asked them to sing their second choice on the list of songs that he had in front of him.  They sang the second choice which was also an original song.  The problem – they didn’t harmonize, and it sounded a bit chaotic.  Sofia told them that she didn’t like it very much, and would never want to experience being stopped midway in her act like Simon did to them.  Howie chimed-in and asked her, no one’s ever knocked on your door?  She said “no.”

Amanda Leconte is a dancer who’s mom moved them out to Los Angeles so that Amanda could pursue her dream.  She wore a long red fur coat which she quickly threw off to perform her dance routine that was pretty good.  Simon told Amanda that he could see her part of a bigger dance crew.  Sofia complimented Amanda on having curves on her body where it’s important.   Both Simon and Sofia said they love how Amanda inspires others.   Heidi said it’s not a $1 million act.  Howie said if he saw her at the club, he’d notice what a terrific dancer she is.  But, would he go see her show?  Probably not.

A fun act by a past AGT contestant returned, adding that he had gained some weight since the last time he stood on the AGT stage.  He noted that Simon buzzed him the last time that he was there, which has caused nightmares ever since.  Brandon came back to deliver a surprise song to Simon!  Simon called it the best song ever and said it will go to number one on iTunes.  While it was “X”s from the other judges, Simon gave him the “biggest yes.”  Howie said it’s “one ‘yes’, two guys,” referring to Brandon and Simon.  Brandon said his “nightmares will be replaced with glorious dreams!”

Anna Thompson is 18-years-old from Seattle, Washington.  She compared her “sonic” to radio head, and her vocals to Ariana Grande.  Once she sang while on the keyboard, viewers will see the comparison, but really, she sounded like her own artist.   Anna said she looks up to Howie for bringing Mental Health to the forefront and she too has OCD.  Howie commended her on just being there because he knows the struggle of OCD is real.

Christina Rae is from Nashville, Tennessee and does body sculpting for a living.  She’s a single mom who told the judges a personal story about how she delivered her son in her car where she lived while she was homeless.  Christina said they currently live in a group family setting.  But, “not a home” and she’s seeking to get a home.  Christina stated that she believed that AGT could be life-changing for her.  During her performance of “In the Air Tonight” by Phil Collins, everyone in the audience knew that indeed in that moment, AGT would change her live forever,  In a good way.

Simon said she was on a whole other level from the other singers they’ve seen, and her voice is “insane.”  Simon asked her to sing her second choice (which he saw on his list).  She said she’ll sing it off the adrenaline she was experiencing in that moment.