SET NEWS REPORT! Special Preview!
It’s official, the pilot shows that we reported on back in December of last year of the new stunt reality series “Guinness World Records Gone Wild” have parlayed into a series of shows to air on TruTV. Not much has changed from the pilot except for the host is now Dan Cortese (“My Dad is Better Than Your Dad”) instead of Jamie Kennedy, and the majority of the stunts were moved to an indoor studio rather than taking place outdoors. 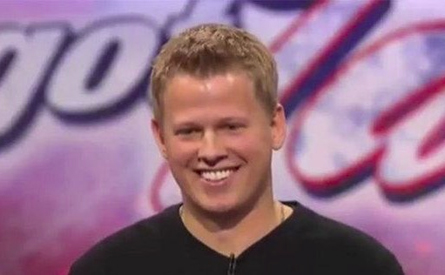 We saw a lot of new stunts, and some old ones that returned from the pilot. One such new contender was actually on several other shows before this one. His name is Rick Smith Jr., a former baseball player whose arm injury side lined him. However, his physical ability to throw up to 90 miles per hour inspired him to try his hand at cutting vegetables with playing cards.

Smith stated that he had to get a “Tommy John” surgery on his arm from card throwing. He said that he must be the only person who has ever gotten a Tommy John from throwing cards. The surgery is where a ligament in the elbow is replaced with a tendon from elsewhere in the body. After he had surgery on his arm, Smith said he can now throw 72 miles per hour. 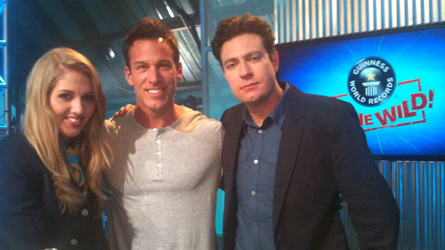 Smith’s “Guinness World Records Gone Wild” challenge was to cut cucumbers with playing cards. In order to qualify, Smith had to cut the cucumbers which were hung in a row on clear fishing wire, completely in half. In order to make the record, he had to get at least five.

Other shows that Smith has appeared on include: “America’s Got Talent”, and “Attack of the Show”. He did not cut cucumbers on either of those shows. Vegetables he has thrown cards at to slice into have typically been carrots or celery.

After his stunt was completed and while he was waiting for the official judgement on his attempt to break a record, Smith threw cards from the stage where he was standing inside of the airplane hanger in which the show was being filmed and actually hit the back doors of the hanger. The stage was approximately one hundred feet from the doors! The audience was impressed.

Other competitors on “Guinness World Records Gone Wild” that audiences will recognize from other reality competition shows were Professor Splash also from “America’s Got Talent”, and Titan from “American Gladiators”. More in our report from the pilot episodes here: https://hollywoodjunket.com/guinness-world-records-gone-wild-sneak-peek-set-exclusive/