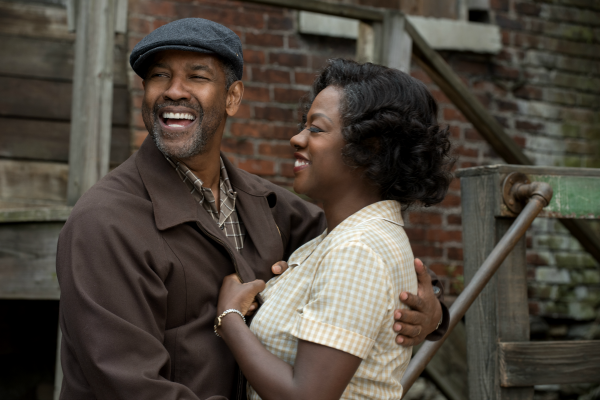 “He’s got a bullshit meter.” – Viola Davis on Denzel Washington

In the new movie “Fences” based on an August Wilson play with the same name, lead actor and director Denzel Washington explores places with the film unexplored in the play.

The story takes place in 1957 and depict the daily life of an African-American family consisting of Troy (Denzel Washington), Rose (Viola Davis), Cory (Jovan Adepo) living in the city of Pittsburgh, playwright August Wilson’s hometown. The struggles of their everyday life where Troy maintains his job as a garbage man, seeking a promotion, and Rose is the matriarch who’s constantly going up for bat for their 16-year-old son Cory who has a promising future as a pro football player. An opportunity Troy is partially cautious of and partially jealous of. He himself sought a career as a pro athlete.

Troy’s guilt of using his brother, Gabriel’s (Mykelti Williamson) insurance money from an accident for being his caretaker to buy the house for his family along with growing up with an abusive father and coping with the lack of moving forward in his life results in drinking and abusive behavior towards his son.

The majority of the cast reprise their roles in the film from the play which they had acted in on Broadway. Viola Davis who plays Rose, won a Tony for her portrayal. 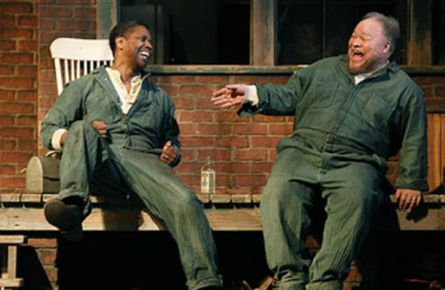 During the first Los Angeles screening of the movie, the full cast was present to answer questions from Variety editor Jenelle Riley who moderated the event.

Seven years ago, producer Scott Rudin send Denzel Washington a screenplay. “Wilson wrote a masterpiece. One of the great plays of all time….it’s the gift that keeps on giving,” Washington described the “Fences” play.

In the film “Fences”, “we get to see how Rose feels when Troy leaves. That wasn’t in the play” said Washington.

Viola Davis said the two things that Washington said to the actors before filming were, “remember the love” and “trust me.” Davis said “he’s got a bullshit meter. A lot of actors don’t know what to say to you to bring it out.” She said of Washington that he’s a great leader and you can trust him. 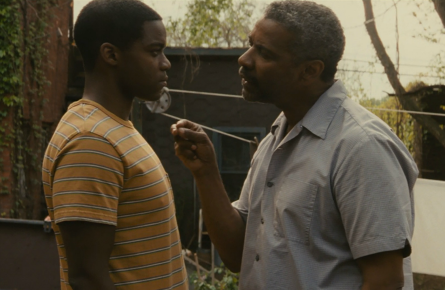 The young actor, Jovan Adepo, who plays Washington’s son, Cory said he cried when he learned he got the role in “Fences.” He said “it’s a role you wait for and it’s a blessing.”

In the first act, Rose points out to Troy to finish the fence, a project that he has been working on with son Cory. A fence, it’s noted to either keep the ones Rose loves in, or a fence to keep others out.

Legendary actor Stephen Henderson, who portrays Jim Bono (Troy’s best friend and co-worker) has been in eight of the ten August Wilson plays. Henderson told Washington he’s the one. Washington said he told him “if I’m the one, then you’re the two.” He then read with him. Actor Russell Hornsby who plays Washington’s oldest son “Lyons” from a previous relationship, stated that it’s an honor to work with “D” (Denzel) and August. Washington told Hornsby not to work so hard.

Kenny Leon, who directed all ten of August Wilson’s plays, was in the audience the night of the Los Angeles screening and came onto the stage with the cast. Washington said they are there because of August Wilson and Kenny Leon.

Leon said it was his first time seeing the movie at this screening and he loved the score. He wasn’t planning on seeing the movie on this particular night. Leon worked on a couple of August’s last plays, and said “this (“Fences” movie) is what August wanted and with this group of people.”

The play took place in and around the stoop of Troy and Rose’s home. For the film, Washington played with other layers by adding a few more locations. One scene in particular was when Rose visited Troy’s job. Washington sought-out the advice from women on whether Troy would walk over to meet her, of if Rose should go to him. He said it’s 1957, he decided that Troy would walk over to Rose in the sanitation yard.

Henderson and Davis both said of the film, “you have to start with the truth.” The cast did the show on stage, then Washington put them in a house. It’s much more intimate. Henderson said in 1957, there’s no TV. So people talked to each other. “Troy is the TV on Friday.”

“When the stakes are that high, it’s not small anymore. August Wilson doesn’t write small. Tragedies are high stakes,” said Davis. Washington said “there’s no such thing as ‘film acting.’ The truth is the truth. So, if the cameras are close, it’s still the truth. The camera will catch lying.”

Gabe stated “you always become what you think about” was his advice to other actors. The question was asked what makes Denzel a great director? Leon responded that the play takes place on the porch. As a filmmaker, he opened it up from the streets to the backyard. “There was a flow of life that allowed August Wilson to feel natural.

After some disturbing revelations come to light about Troy’s true character, the fence reference comes up again in an ironic way. Troy tells Bono that he finally finished putting up that fence. Bono responds, “you sure did,” signifying Troy put up his own fence keeping everyone that loved him out.

Washington said “August Wilson is just a genius.” He said we are lucky that he wrote for us and he is privileged and honored to speak his words. He said the only other playwrights were Shakespeare or Eugene O’Neill where he reacts “Oh, that’s what he meant…But usually happens after we close.”

Davis noted what makes Washington a great director is he’s a great teacher. The same as Lloyd Richards, she stated. “He gave us something we can use beyond the movie. Something he taught me was the last scene” after Troy’s death and Rose is talking to Cory who had returned from the military to attend Troy’s funeral. She said Washington told her this is not a monologue. This is for Cory. He happens to really care. She said most directors are more concerned with the shot.

The actors had a three week rehearsal time. They said they had to re-investigate the material and went back to their original blocking (how the actors place themselves within the scenes).

Washington said they shot the “Fences” movie for 38-40 days. During rehearsals, he said he really pushed the actors. They were in Pittsburgh and they visited August Wilson’s grave. Henderson stated that “August considered that last group his dream team.”

When Washington saw the last shot, where the characters are looking up into the sky as Gabe is playing his trumpet, the gate closed by itself. He used that shot in the movie. “Fences” is playing in select theaters and opens nationwide on December 25, 2016.