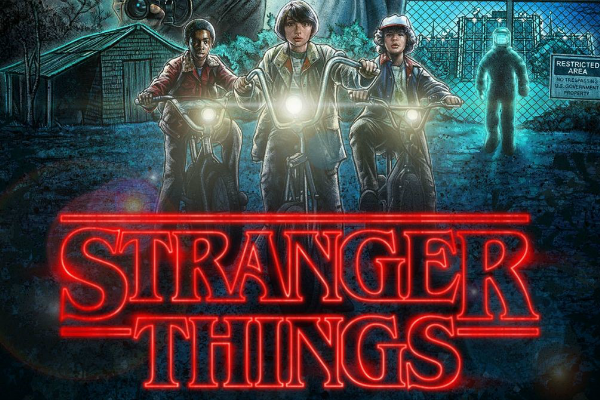 It was the show that could, and did. The real-life story of how “Stranger Things” got off the ground and onto Netflix screens is one of atypical porportions. Created, written, (and sometimes directed) by brothers Matt and Ross Duffer, “Stranger Things” received a lot of “no” responses during pitch sessions, and recently, got a lot of Primetime Emmy wins and nominations.

“Stranger Things” is the tale of a mother and her two sons set in the 1980s. The mother’s (Winoa Ryder) youngest son comes up missing in a shroud of supernatural forces soon discovered by his family who seek his return. 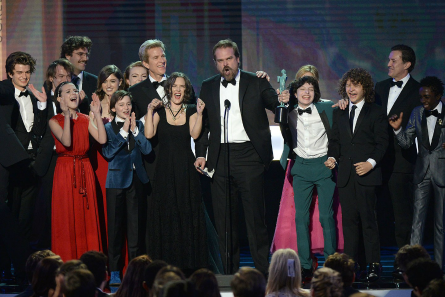 THE MAKING OF STRANGER THINGS:

On working separately, the Duffer brothers states, “we’re pretty dysfunctional apart actually.” How the Duffer brothers pitched the show was – what if Spielberg directed a Stephen King book in the 1980s. “Stranger Things” got rejected a lot. However, they resisted changing it.

The executive producer, Sean Levy, described “Stranger Things” as an eight hour movie. He wanted it to feel cohesive. The editor had suggested that they make it an eight hour movie and just cut it into eight episodes. Their director of photography, Tim had done “Mr. Robot” before working on “Stranger Things.” He said he re-watched the E.T. movie. “The references were strong.”

“We find people who get it. I knew I had to find a way to get it into the world. We’re all looking for someone to bet on us,” stated Levy. He read the script and said it was “exceptional”. Levy said he hadn’t seen the Duffer brothers movie at the time.

The “Stranger Things” theme song is by the band “Survive”. They’re electronic guys who haven’t done that much. Duffer brothers said that their film composer had not done anythig before. Netflix let them hire whomever. The composers wrote hours (24 to be exact) of music before a frame was shot. It’s not traditional to do it this way. They sent it to Netflix. Michael, the composer, didn’t know that the theme song is now a ring tone! He was excited, and someone in the audience played it on their phone for him to hear.

Production designer heard about the show first. They filmed in Atlanta. Some of the locations there are time capsules of that era, he stated.

In season one, “The Clash” song represents a bond of the family. A mother keeping hope to find her son. It was a bond between the brothers. It was the pulse of the story. The casting director, Carmen Cuba who won an honorary Oscar and now an Emmy, said trying to link the sole of the person to the sole of the character.

Actor David Harbour who portrays Jim Hopper the police chief that is on the case of the missing brother, called it “a dream project…beautiful script and beautiful character.” He previously was in “Black Mass” with actor Johnny Depp. When Finn Wolfhard, who plays Mike Wheeler was going through the casting process for “Stranger Things” he was in bed sick with the flu and had to send in an audition tape. He communicated with casting by texting back and forth.

Gaten Matarazzo, who most viewers recognize as the kid with long, curly hair (Dustin Henderson) his manager was always trying to get him to cut his hair before he got the part on “Stranger Things”. Matt Duffer stated, “his hair is glorious”.

On the process of working with kids who are minors, Levy said “it’s challenging. But, it’s worth it.” The kids have about a nine hour window of time spent on set which is also divided into attending classes while when not filming their scenes.

Duffer brothers stated if you ever watched a movie with special effects and wondered why they didn’t do certain things practical? He said, “we’re those people.” And, “the line between it (effects) being campy and good is thin.” One example when they discovered effects made for a better outcome was when in Season one, the monster came through the wall. 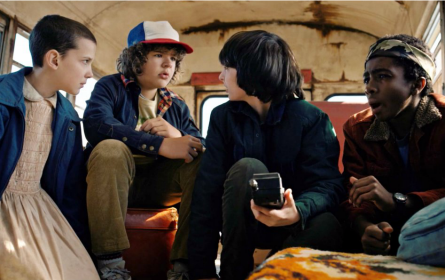 The child cast of “Stranger Things”

The child actors on “Stranger Things” all had to watch such classics from the 80s that “Stranger Things” was based on such as “Stand By Me.” Duffer brothers said they looked to “Close Encounters of the Third Kind” and “Breaking Away” in reference to every small town in U.S.A.

WHAT TO EXPECT FROM SEASON 2:

Set desinger Chris said, “this year, we built these sets that are ridiculous to build. Season 2 is a huge operation after we proved ourselves” with the success from the first season. Stephen King tweeted on Twitter that he liked the show on the afternoon of their season one premiere.

Some other things to expect from season 2 that the Duffer brothers have revealed include introducing four new characters, fast-forwarding to one year later, Eleven will be back along with the Upside Down.

The second season, which they finished around June of this year, the brothers said they could really write to the strengths of the actors. The character “Steve” (played by Joe Keery) was awful. They wanted to give him more of an arch because he’s played by such a great actor, the brothers expressed.

In a previous interview, the “Stranger Things” season two premiere date was slated for Halloween on October 31, 2017. The most recent premiere date given is October 27th of 2017.