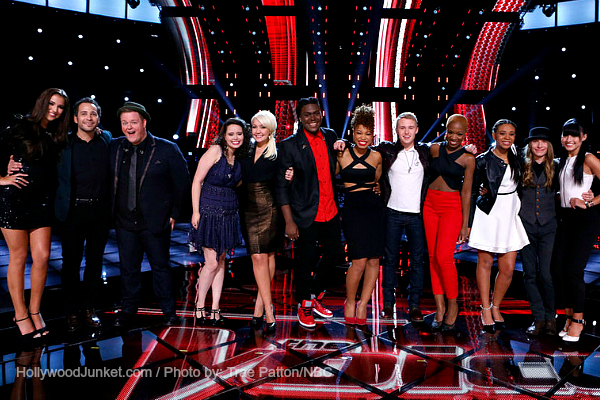 The fist night of “The Voice” Live Playoffs has artists performing from Team Adam and Team Blake. Adam said for his team, he’ll be watching for artists that “connect and break-through.” A lot of great feedback came from Christina Aguilera tonight who was inspired by one artist; warned another artist of too high of notes; and complimented another one for embodying a song.

The second night of the Live Playoffs featured artists from Team Christina and Team Pharrell. Coaches Comments: Christina told Sarah she “embodied that song”, and told her she loves her emotion. Pharrell loved the dynamics of her voice. Adam said he was worried about the guitar part in the song, but was impressed that she used that part to fill-in with her voice. Coach Blake credited Sarah for the song choice. Of course Blake bragged to stealing Craig Wayne Boyd back last season, and then he won to Hannah Kirby whom he stole back this season.

Coaches Comments: Christina saw a Hannah move that she wanted to steal. Pharrell called it entertaining – the way her voice controls her body, and commended her with “you are a SINGER!” Adam complimented Hannah for being fearless. Coach Blake said Hannah is possessed by the song she is singing and that a person like her is the reason that the show exists. “He can really sing a ballad are really tare your heart out when he does” said Blake about Corey.

Coaches Comments: Christina told Corey that he has a special way, a tenderness of engaging with the audience without having to do much. Pharrell said he saw “an overwhelming sense of sincerity.” Adam was the bad guy because he wanted more – more passion and a stronger ending. Coach Blake said Adam has a point, but said Corey did well with moving the audience with a story and that makes him special and stand-out.

Brooke Adee sang “Love Me Like You Do” by Ellie Goulding Blake picked the song and it pushed Brooke out of her comfort zone. Blake said Brooke pinky-promised him that she wouldn’t get pitchy with the song.

Coaches Comments: Christina said she saw her “focus face” and she hit all the right notes and liked her strength but would like to see her less focuseed, and looser. Pharrell said he loved how she exerciese the sweet part of her voice and displaying her range but wanted to see her own flair. Adam thought that it was good but “it felt stiff”. Coach Blake said there’s room for her to be “looser” up there but showcased what “a great, perfect singer” she is. Meghan struggled in Nashville and had to start over with a solo career. Blake gave her that song to sing somehthing more current. He said this could be Meghan’s theme song.

Coaches Comments: Christina thought it was “so great!” Then had to wait for the audience cheers to fade out. Former coach Pharrell said he was proud of her and glad she got to go back with Blake. Coach Blake said he is sure she will end-up in the Top 12 after that song. During rehearsals, Pharrell recommended “you can’t just sing a song perfectly, you have to share some of what you have with the audience.”

Coaches Comments: Adam said it was “blanking– amazing!” and “it doesn’t suck to be you right now!” Blake got Adam’s joke on him. Blake told Caitlin that she’s starting to show herself as a competitor and called her a “great artist.” Christina said she always looks forward to her performances, but she often goes over with her high notes. Coach Pharrell is proud of her and told Caitlin has proved that she deserves to be on “The Voice”. Lowell said he’s changed since his last performance. Pharrell told him he has to “drive this plane”

Coaches Comments: Adam told Lowell he is happy that Lowell chose the song, and that Pharrell forced him out of his comfort zone. Blake reacted by comparing to Adam Levine’s falsetto, “great job.” Christina said Lowell got better as the song progressed and he seemed natural and focused without over-doing it and liked his personal twist. Coach Pharrell told him “good job” and said Lowell was better having fun with it and being focused. Coaches Comments: Adam said he loves that song so much and though she did a great job, and thinks there’s still a lot that she will do that will be awesome. Blake would chose Mia Z if there was one more person he could pick and called her “under-rated.” Christina said she really, really liked it and was glad that it wasn’t cliche and was inspired to maybe sing it herself. Coach Pharrell called her an “amazing talent” and it’s rare to see a 16 year old like her with that much range.

Koryn Hawthorne sang spiritual song “How Great Thou Are” Pharrell referred to Koryn is an inspirational artist and said Koryn has the same drive that Beyonce has.

Coaches Comments: Adam tired to think of a unique comment. But, came up with her grid is “so amazing” and complimented her destroying her nerves. Blake was drawn-in by Koryn. Her young age of 17 blows him away. He welcomed her to the Top 12.” Ex-coach Christina misses her and saw how she resembles Beyonce. “The Grit, and power and emotion you have were spot on!” Coach Pharrell said she lit-up the living rooms across the nation   Sawyer Fredericks sang “Trouble” by Ray LaMontagne

Pharrell said the song pushes Sawyer to explore different parts of his voice. Pharrell said Sawyer’s characteristics “is what a real artist is made of.”

Coaches Comments: Adam said it was surreal because he’s 16 and his soul is way older than he is, and a huge fan. Blake said the other coaches are screwed and Sawyer’s a star. Coach Pharrell told Sawyer is a natural. Coaches Comments: Blake admitted that it was a dumb thing of him to let Joshua go and he’s with the right coach now as much as he hated to compliment Adam. Christina thought Joshua had a “beautiful tone” to his voice. Pharrell agreed with Christina’s comment and he’s interested in what Joshua will accomplish in his future. Coach Adam said Joshua voice makes it sound like “everything’s going to be alright.”

Brian Johnson sang “At This Moment”

Adam stole Brian from Blake. He told Brian that his performance will be a show-stopper. Coaches Comments: After Blake stated that the song brought him back to “Family Ties” he called Brian’s vocals “perfect.” Pharrell said it was “masterful” and wasn’t forced. Coach Adam said he loves Brian because he’s focused on winning.

He’s 17 and had difficulty feeling the song more. Adam advised him to “unchain himself”. Coaches Comments: Pharrell complimented Nathan’s singing without the guitar. Coach Adam said Nathan’s biggest hurdle to get over was performing and said he’s happy that Nathan really succeeded in his fearlessness on stage.

Deanna Johnson sang “Down By the River to Pray” gospel song.

Adam has been trying to get Deanna to overcome her nerves on stage. Adam gave her a church song since she’s the most comfortable singing in church. Deanna said the song symbolizes her baptism of getting more confident. Coaches Comments: Host Carson Daly reminded everyone that no chairs turned for Deanna when she first came onto The Voice last season. Pharrell welcomed her back and complimented her purity. Adam said her talent is so amazing that she has to believe in herself and that she finally did. He called her performance “completely flawless”. Christina said Sonic is really good at taking a vocal and making it her own.

Coaches Comments: Pharrell described Sonic’s performance as “a cool little journey.” Adam advised during a live performance that “you gotta find it” after Sonic lost it, but then picked-up the flow again. Blake said it was “raw, anger energy” and was like “drawing blood.” Coach Christina called her inspirational because of Sonic’s hearing loss. Coaches Comments: The coaches had to wait a minute for the audience to stop cheering and screaming over Nichole’s performance with her Great Grand-mother in the audience. Pharrell described her performance as “perfection”. Adam said it’s “a really, REALLY hard song to sing, and she DESTROYED it!” Blake said Team Christina just whacked Team Adam! Coach Christina said Kimberly is such an amazing, unique spirit.

Lexi Davila sang “All By Myself”

Christina stole aspiring R&B and Soul artist Lexi from Adam. Lexi is a Junior in high school and can’t relate to the song. Coaches Comments: Former coach Adam told Lexi that he’s so proud of her, and NOT stupid that Christina stole her. Blake was happy to see Adam missing out on the loss of Lexi because she was that good! Coach Christina that she made her so happy and Lexi “nailed it!”

Christina gave India her song “Hurt” because “she needs to get “fearless” and “powerful” Christina said. Coaches Comments: Pharrell said it was like watching a film close and was very entertaining. Blake described it as “emotional, dramatic, powerful” and said she couldn’t have made it any better. Coach Christina said it was unbelievable and that India commands the room with her voice and said she’s blessed to have this “special singer”

Rob prepares taxes for a living. Christina picked this song so Rob can tap into his R&B sound. Coaches Comments: Pharrell and all the other coaches were standing at the end and called it “the definition of effortless”. Adam said Rob put his whole body into every note and “that’s crazy!” Coach Christina said she was happy that the coaches got on their feet for him, and hoped that he soaked in all of the positive reviews and reactions. Wednesday Night – The results of America’s votes will be revealed to give us the TOP 12, and former contestant Chris Jamison will perform.

NEXT WEEK: Reba will be on “The Voice” Host Carson Daly revealed the artists with the most of America’s votes were Corey Kent White, and Meghan Linsey. The bottom three artists were Sarah Potenza, Brooke Adee, and Hannah Kirby. Blake said he’s proud of all three of them, but chose to move Hannah Kirby into the Top 12. America voted for Kimberly Nichole, and India Carney to stay in the competition. The bottom three were Sonic, Rob Taylor, and Lexi Davila. Christina had to chose only one to stay. She told them that they should not feel less important because they all knocked it out of the park. Christina chose to keep Rob Taylor. Host Carson Daly announced that America’s votes saved Sawyer Fredericks, ans Mia Z. The bottom three were Lowell, Koryn Hawthorne, Caitlin Caporale. Pharrell said he wanted them to prove to themselves that they deserved to be on “The Voice” and said they over-delivered. He went with his gut and chose to keep Koryn Hawthorne. The two artists saved by America’s votes were Joshua Davis, and Deanna Johnson. The bottom three were Brian Johnson, Tonya Boyd-Cannon, and Nathan Hermida. Adam told them that he loves all of them. He told Tonya she is is rock, Nathan came out of his shell, and glad he got to know Brian. Adam chose to save Brian Johnson.