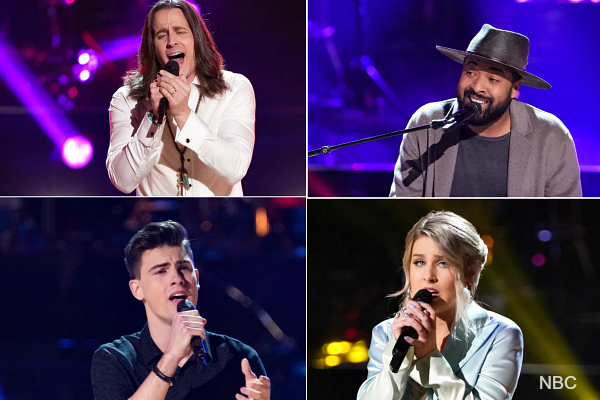 In the final night of “The Voice” season 18 Knockout round, it included a live element where viewers got to vote on the very last Knockout of the night. The Four-Way-Knockout.

James Taylor continued his efforts with all of the Teams in his role as Mega Mentor. John Legend told James Taylor that the last Mega Mentor they had on the show was named after him.  That was Taylor Swift.

Blake said the pressure has never been higher with the Four-Way-Knockout.  He must have seen Team Kelly as a threat because he predicted that there’s so much more that they haven’t seen yet with Samantha Howell. The winner of this Knockout is yet to be announced during the first Live Show of the season.

Thunderstorm sang John Legend’s song.  John said his tone sounded so good for the song.  He advised him to let it “build more” and get more dynamic.  Taylor advised him to give more eye contact.   Taylor said he has a lot in common with Thunderstorm.  He loved the fact that Thunderstorm has an instrument and that’s what sold the song. Mandi said Thunderstorm made her try harder, so she could “shine too.”

Nick chose Thunderstorm. Kelly called it a “little bit more competitive.”  But Mandi “came to win more.” Blake agreed and said Mandi “swung for the fence a little bit more.”   John said Thunderstorm has one of the coolest tones he’s heard.  He said him singing his song sounded so right for his voice.  The coolest thing about Mandi’s voice was her bravado.  The winner was Mandi.

KNOCKOUT WINNER: Mandi Castillo.  John said it was a tough choice and Mandi deserved to win because she keeps surprising him.

STEAL: Nick stole Thunderstorm.  Nick said he was the luckiest man in the world to pull this off. His plan was for the other coaches to use up their Steals, so he’d have his left!

Nick told Taylor that this is the first time the artists are picking their songs.  Nick stole Jon from Blake because he said he had all the talent in the world.  He called Arei a “great performer” and he’s glad that he Blocked Kelly from her.  She picked “You Don’t Know My Name” by Alicia Keys for her Knockout song.  She said she’d been with her husband for ten years and that’s why she chose the song.  Arei explained because Alicia spoke it into existence and got her guy.  Arei said she did the same.  Taylor told Arei  that the stage presence is so direct and advised her to sing more forward.  Nick advised her on how to unblock another part of her voice that “is really powerful.

Jon chose the song “Thinking Out Loud” by Ed Sheeran.  He chose the song for what he’s going through currently with his wife who fell down and went through a recovery period.  Arei said Jon has “such a strong tone” which was intimidating and inspiring.

Kelly told them they are both “very powerful singers” and liked that they were both physical in their performances.  She picked Arei. Blake said it felt like everything that Arei did, Jon turned it up a notch and he went with Jon.  John told Arei that he sang back-up vocals on the song that she chose.  Arei was pleasantly surprised to learn that.  John called them both excellent performances and they have great vocals and range.  Nick reacted that he was in “turmoil.”  He said Jon was incredible and Arei was phenomenal.   He said he was amazed that Arei picked him. Kelly noted because he Blocked her!  Nick said he imagined in his mind that Arei would have picked him.  He chose Arei.

KNOCKOUT WINNER:  Arei Moon.  Nick said there was no way he was going to let her go because she’s a star.

Kelly said Micah “has range for days,” and Taylor really pushed herself in the Battles.   Micah told Taylor that he came from a singer/songwriter family.  He chose “Graveyard” song by Halsey.  Micah said he was way out of his wheelhouse with this song choice and it’s him trying to stretch himself.  He said the song speaks to him because he was in love with a girl that didn’t treat him nice.  Mentor James Taylor said Micah is present which is important.  Taylor Green chose “Time After Time” by Cyndi Lauper.  She said the song connects with her and her family.  Micah noted that Taylor’s voice “is really sultry” and felt worried because he had to compete with that.

Blake said this is a situation where song choice is so important.  He stated that Micah’s song choice didn’t allow for him to sell it like Taylor’s song choice did, and she took full advantage of it.  John agreed.  He said they both have great voices for radio.  But, with Taylor, it was mesmerizing.  Everything about her said she’s a star and she deserves to be here.  Nick agreed.  But, said Micah had a powerful performance and draws them to him.  Kelly said in Micah’s defense “that’s a really hard song to sing” and he has an incredible tone and range.  She said she didn’t realize how incredibly difficult her decision would be.  Kelly went with her gut feeling and chose Micah.  She said he blew people away in the Blinds and Battles and this was “just a difficult night for him.”

Micah was grateful and thinks Kelly just sees his potential.  Nick said he wished he has a Steal left for Taylor because it was one of the best performances of the night.

Nick said although their voices are very different, “something about them really works.”  Jacob Miller said he never knew his Grandparents, but connected with some of the songs that they wrote.  He chose “Better Now” song because he said it’s a song “that’s really accessible to a general audience” and he can put his own spin on it.  Taylor said he knows the song and it really suits his voice.  He advised Jacob to give more expression  Nick advised more tempo so it doesn’t feel that it’s “lagging at all.”  Nick said if it doesn’t feel authentic, it doesn’t resonate.

Allegra said a few months ago she was a Senior in high school an now she’s on “The Voice” and isn’t taking anything for granted.  She chose “Chandelier” song by Sia.  Allegra said when she was 13, it was really a hard time and dark.  Music took her out of the state that she was in.  Taylor noted it was “a totally different approach to the song.”  Nick advised her to enunciate a bit more.  Nick advised her to create a space for her voice to soar.  Taylor complimented for her to sing high and low “is really impressive.”

Kelly called them both “fantastic” and liked how Jacob slowed the song down.  She called Allegra a Willie Nelson of Pop and she “picked a hell of a song.” Blake said Jacob’s guitar skills are great and called him “flawless.” Blake also said Allegra has a chance to win “The Voice.”  John told Jacob that he wants a little charm on it.  He told Allegra a little bit more enunciation.  Nick told Jacob that he’s an artist that he’d love to work with and Allegra’s voice is magical and he is “entranced.”  He chose Allegra.

KNOCKOUT WINNER:  Allegra Miles.  Nick said he’s sure that viewers will see Allegra in the finale.

TEAM KELLY Knockout:  Mandi Thomas vs. Anaya. Kelly said Mandi took it even higher and made it more rangy.  She chose Mandi Thomas as the Knockout winner.

Blake Stole Cedrice.  He paired her with Toneisha.  Blake said they both have similar tastes in music, and they both chose Rihanna songs. He added that they also both want to go down the same path.  Cedrice chose “Love on the Brain” by Rihanna.  Taylor said her voice was strong and piercing.  Blake advised her to “shoot up” and be a little bit sharper, bend her notes.  He thought it was a good song choice for her and gave him an idea of who she is artistically.  She chose the song for her past relationship and for the love she’s currently with, she called the love of her life.

Blake pointed-out that “tone” is in Toneisha’s name.  Her dad had a massive heart attack and left a huge hole to fill.  She chose “Diamonds” by Rihanna.  She chose the song for her dad and said she can feel him, telling her to “shine.” Taylor said there’s an effortlessness about her voice and compared her to Barbara Streisand or Aretha.  Blake advised her to control that nervous energy before the Knockout and to “calm down.”  Taylor advised her to do a meditation trick.  He advised both Toneisha and Cedrice to really connect to the song.  Blake said it would come down to which artist can vocally blow them away.

John said he was so blessed to have Cedrice on his Team and with Toneisha, there is nothing she can’t do.  Nick said Cedrice tells stories of the world and Toneisha makes him mad because there’s nothing remotely he can do to come close to her.  She’s really phenomenal and she got even better after Blake.  Blake called it a natural development.  Nick predicted that Toneisha could win the show.  Kelly disagreed a little bit and thinks they both can win.  Cedrice is so pure and Toneisha’s voice has a piercing beautiful spot.  Blake said the other coaches’ input really helps and the artists were equal in what they gave in their performances.  He noted that Toneisha comes out and points to where she wants the song to go.  He thanked them for “giving it their all.”  Blake chose Toneisha.   Blake noted that Toneisha has been a front-runner since day one.

STEAL:  Kelly Stole Cedrice.  Kelly said there’s no one like her on the show. She’s peaceful passionate and will do great in the Lives.

Nelson Cade III (Team Legend).  John said he loves Nelson’s tone.  but his biggest concern is with it being a Four-Way-Knockout the audience will want some fireworks.  “He’s got to bring it.”   Todd Michael Hall (Team Blake) said he wanted to do something new for his Knockout.  He chose “Somebody To Love” song.  Taylor called Todd having “a rare gift”  Blake said everything about Todd makes him unique and different.  Taylor thought he stood a good chance at competing with the others.  Samantha Howell represented Team Kelly.  Kelly said it’s the first time she saw a lot of soulfulness come out of Samantha.  She chose “Always on my Mind,” song by Willie Nelson.  Michael Williams chose “You’re the Reason” song.   Nick said he’s seen Michael grow.  “He has the voice of an angel and continues to get better,” stated Nick.

Blake told Todd that his range “is stupid” and thinks he’ll “blow it up” in the Lives.  John said about Nelson that he’s watching someone that truly loves music when he watches him perform.  Nick told Michael that it was the best that he’s ever sounded and he has to continue in the competition.  Kelly told Samantha that she has this tone, that one other person has, Ashley Monore and it’s “so captivating.” She said it was so beautiful.

NEXT WEEK: It’s a behind-the-scenes look at “The Voice.”