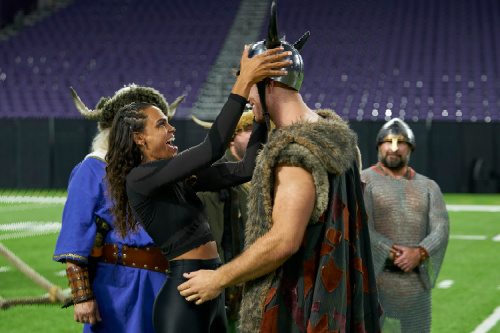 For the first time since the start of the worldwide pandemic, “The Bachelorette” show  brought back the travel to a lead’s home town!  ‘Bachelorette Michelle Young traveled with the men to her hometown of Minneapolis, Minnesota.  That means that viewers will also see the return of the long awaited hometown dates taking place in the actual hometowns of contestants!

When the twelve remaining men arrived in Minneapolis, Minnesota, Michelle welcomed them by announcing that the first date was a one-on-one that started right then and there.  She plucked Joe out of the group to go on the date.   Martin thought it made sense because with Joe being from Minneapolis, they could share their hometown experiences together.

In this episode, Michelle’s bond with Joe, and Nayte grow stronger.  Michelle’s relationship with Chris S., who got the final rose last week, takes a drastic turn. 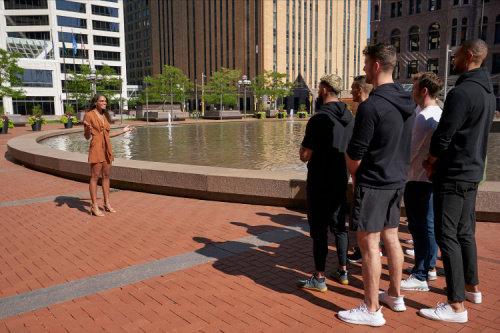 In this episode, Michelle’s bond with Joe, and Nayte grow stronger.  Michelle’s relationship with Chris S., who got the final rose last week, takes a drastic turn.

Michelle and Joe attended a Twins game where Michelle threw-out the first pitch.  Next, Michelle took Joe for a visit at her high school.  She took him to her locker.  Michelle’s photo from eight grade Varsity was still hanging in the hall.   After a look through the yearbook, they visited the gym.  Then the two former basketball players of course made the basketball court their next stop.  Michelle noted that  she and Joe have this “magnetic energy.”

Joe said it’s the best date he’s ever been on.  Michelle said Joe reminds her a lot of her father and brother in that they don’t express emotions, and are more reserved.  Joe said he’s only seen his dad cry maybe once or twice.  His dad is very reserved.  Joe said for him, it’s more of a trust thing and going through “The Bachelorette” process is not comfortable for him.  Michelle said it felt like they were on the same team.

Back to the men:  The men were pining for the next one-on-one date.  Nayte was a little stressed.  When the date card arrived, the following names were on it: “Casey, Rodney, Martin, Leroy, Rick, Clayton, Olu, Chris, Brandon.  Meet me at the stadium. – Love Michelle.”  The guys were super excited.

The guy who got the one-on-one was Nayte.  Chris S. was super upset because he said he went out of his way to warn Michelle about the guys last week who thought they had it “in the bag” (Nayte being the main one) and now he’s coming up with “the short end of the stick.”  Basically, he thought Michelle didn’t appreciate him.

Back to Michelle & Joe:  During the dinner portion of their date, they toasted to making new memories.  Michelle told Joe that there was no one better to come on the date with her than him.  Michelle asked Joe to tell her about himself.  He talked about some injuries and how he got a botched surgery on his foot.  Joe had to get seven screws in his foot.  He said after that, his performance in games “wasn’t the same…it was beyond difficult.”  Joe broke-down and cried.  Then Michelle cried.

Joe said so much of his identity was caught up in basketball that when he stopped playing, he didn’t know who he was.  Michelle said there was a different meaning behind their kiss tonight with Joe and she was glad that he trusts her to open-up about his feelings.  She gave Joe the date rose.

Joe said when he’s with Michelle he feels really comfortable expressing himself.   Michelle said it was the best, “stars aligning” date she’s ever been on.  She said they were two souls living side by side and not knowing about it and were brought together. 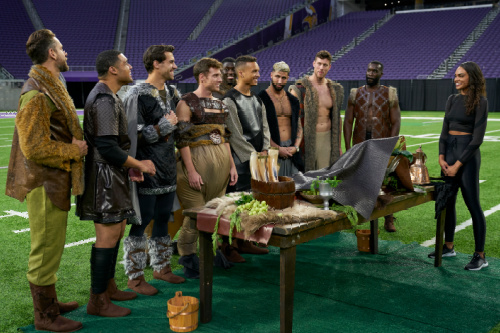 Michelle took the group date to the Minnesota stadium.  Some guys came out from the stands that were dressed-up as Vikings.  Michelle said the two things she requires in a man are bravery and heart, which these Vikings have.  The mens’ first challenge was they had to give their fiercest Viking “war cry” (yell).

Next the guys had to get into some warrior costumes.  Appropriately, Chris’ costume had a horse’s behind!  Before their physical fight, the Vikings invited them to eat some really gnarly food that included fish’s brains.  Rodney was freaked-out.

The first arm wrestle was Chris S. vs Olu.  Chris wanted to forfeit.  Next, was Martin vs. Clayton, and so on.. The “Ultimate Viking” award went to Clayton.

Clayton got some alone time with Michelle,  She said the more she spends time with him the more she likes him.  He asked Michelle if she’s always been confident.  She answered that it was something her Dad instilled in her.

Brandon cut-in to get some time with Michelle.  Michelle liked that Brandon went through great lengths during the challenge.

While the men were waiting, they stated how every guy made it a point to spend time with Michelle, except Chris S.  Olu told Chris after “the stunt” he pulled last week, “the vibe was different.”

Back at the house:  The date card arrived which read, “Nayte, I’m looking for a man that’s not afraid to test the waters…Love Michelle.”

Back to the After Party:  Casey noted that Chris was acting “weird” and was “off.”  Chris told Martin how he was upset that Nayte got the one-on-one date after he warned her about him.

The time came for Michelle to hand out the group date rose.  She said the rose goes to someone whom she really connected with today.  It was Clayton.  Chris looked-on in shock.  He was upset that Michelle didn’t come to check-in on him and spoke to every guy there except for him.

Michelle and Nayte’s date was on the water on a boat.  Michelle told Nayte that their date is turning into a “group date” as she brought in her two best friends, Allie and Tia who were there to ask the hard questions.  They immediately asked Nayte if there were any guys in the house there for the wrong reasons.  Nayte told them about the incident between him and Chris S.

Michelle’s friend said in her past relationships it’s been so hard for MIchelle to find the right guy.  Michelle said from the first day she and Nayte have this undeniable chemistry.   Allie said they have the most amazing, natural chemistry and MIchelle just needs to trust her gut.  The friends left Michelle and Nayte to themselves.

Back to the men:  Chris S. said what he told Michelle will validate what he said to her about Nayte.  He told Martin that he has a lot to say to her and “it can’t wait.”

Back to Michelle & Nayte: During dinner with Nayte, Michelle said it was a special date for her.  She said she learned how much being vulnerable can add to a relationship.  Nayte said he definitely wants someone who will call him out on his shi#$@.  Michelle responded that she will do that for sure.  Michelle said she was in a relationship for three years where she was always giving and giving.   When she got sick, she moved back with her parents after her boyfriend said he couldn’t do it anymore.  She said her physical sickness was a result of her toxic relationship.

Out of nowhere, Chris S. showed-up to interrupt Michelle and Nayte’s dinner to ask to speak to Michelle.   “It’s really important.”  Michelle left Nayte to go talk to Chris outside.  He told her that he feels “very insecure” being there and didn’t get the chance to talk to her.  He felt “played” by the whole thing.  He said after what he said, it fell on deaf’s ears and doesn’t want her to make a mistake.

Michelle told Chris that she was caught off guard how he approached the situation because he did speak for her.  Chris asked why she put on a big smile and was fake.  Michelle said she appreciates him looking out for her, but she can speak for herself and wants a man who will let her speak for herself.  Michelle explained that “I have to be confident in myself ” and she can make her own choices.

Ultimately Michelle told Chris that she didn’t see this relationship progressing and walked Chris out.   Michelle said she thought Chris was trying to control her decision, but this is her journey and if she gets heartbroken, then that’s on her.    Michelle gave Nayte the date rose.  She said he trusts her in making her own decisions.  “Today has been an unbelievable day.  Even more special than I could have imagined” Michelle said.  Nayte said he genuinely wants to fight for Michelle for the rest of her life.  Michelle said in her confessional that she does feel like she’s falling for Nayte. 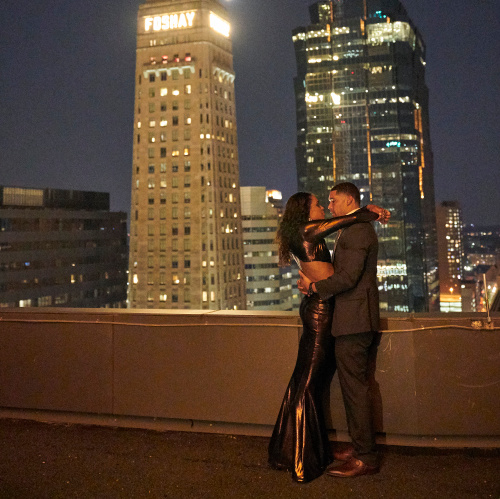 Rodney said this is one of the best group of guys he’s ever been around.  Michelle greeted the guys and told them they did a great job of making her feel seen this week and told them she sent Chris home because he wasn’t her person.

Michelle and Rick spent some alone time together on a stroll down the sidewalk.  Rick said “Michelle is a dream come true” and she makes him feel like a better man.

Michelle brought Brandon a surprise birthday cake.  Olu told her that every moment with her is pushing him to be a better man for her.   Michelle took Rodney to the roof top to enjoy the city view.  They yelled out “we love Minnesota!!”  They hugged and kissed.  Rodney said it’s been the best night with Michelle so far.

There was a slight snag for Martin when he defined a woman as “high maintenance” when she expects a man to take care of her.  Michelle didn’t respond too well to that.

Michelle handed-out five roses at the ceremony.  Michelle told the men that she “truly admires” all of them. But, she has to follow her heart.’

Joe, Clayton, Nayte are the guys who already had roses. 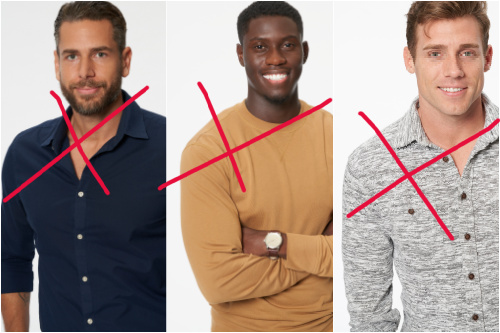