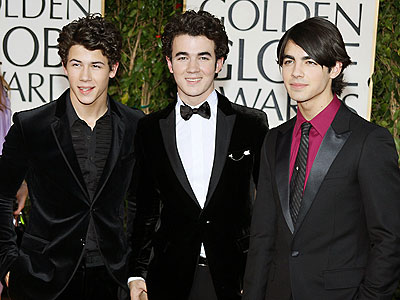 Kevin Jonas, (center) with brothers Nick and Joe attempted stunts consisting of household items on “Minute to Win It” in an effort to win big for his charity.

It was a special celebrity episode yesterday on the set of “Minute to Win It” hosted by chef and TV personality, Guy Fieri as the show welcomed Kevin Jonas of Jonas Brothers. The eldest Jonas brother, Kevin, took the stage to compete for $1 million for his charity, Change for the Children Foundation. Young, screaming, Jonas fans were called-in by the bus loads… literally for the show taping, and were what the majority of the audience consisted of.

Yesterday afternoon, paparazzi captured photos of brother, Nick and Joe as they left their home in Toluca Lake to head out to Studio City where the game show is filmed. Nick was seen with his JONAS “on-screen love interest” Nicole Anderson.

Joe Jonas was also photographed leaving the family home. According to JonasWorld.org, Joe attended the show with girlfriend Demi Lovato.

UPDATE:
The Jonas Brother’s “Minute to Win It” episode will air Wednesday, May 12th on NBC.