NBC’s physical challenge game show, “Minute To Win It” started filming again yesterday with a few changes, along with “Ding-Dongs” and an intimate story from the host.

Contestants of the show face stunts that involve everyday household items as well as food. Fieri, this time acknowledged on-stage that the food might be thrown into a lot of the challenges because, well, he IS a chef. A question we asked him during our phone interview after the first slew of episode tapings had wrapped, and he responded back then that he didn’t think the food was for his benefit.

The biggest change the show has made is the “game show agents” as in, there are none. Previous episodes that aired included two young women, (Lauren Gilmore and Ai-Li Wang) dressed in latex pants and matching jackets that would help set-up each contestant in their stunts. The second change, no more smoke that went along with the setting-up of the agents props used in the players’ stunts. 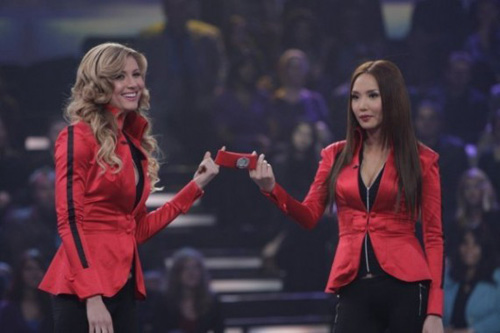 These women didn’t seem to be used to their full extent on previous shows. It was strange having them there primarily to secure game challenges, but without talking to either the host or the contestants. There needed to be either just one who could also be a co-host, or none. It appears that maybe the producers of the show were thinking the same thing. The girls got the axe.

Agents were required to get into awkward poses as Fieri introduced each player to their stunts. A lot of times, production had to wait as the girls secured their placement on-stage and work the smoke in a the right time.

The production of the show is cleaner, simpler (I didn’t think that was possible) and more efficient with these changes, along with adding the “blueprints” that explain each challenge, it is assumed, during post editing. Also gone is the raised platform that Fieri would talk to contestants on, and now replaced with flat wood flooring.

A few things that haven’t changed is the amount of money challengers can win at each level with $1 million being the top prize. Some familiar stunts remain and new ones introduced. Yesterday’s show included these games: Egg Roll, Egg Dance; Sticky Situation; Keep the Change; Chocolate Unicorn.

The “Chocolate Unicorn” has the contestant stack seven “Ding Dong” chocolate cakes on top of each other and balance them on the forehead. “Sticky Situation”, the player must make a ping-pong ball stick to slices of bread with peanut butter or jelly. After these food stunts, Fieri played with the food by throwing it into the audience as well as eating a slice of the peanut butter bread.

This inspired him to share a childhood story with everyone. He stated that his parents were “hippies” and that they’d make their own food, including bread and peanut butter. Fieri said he was embarrassed by the fact and the appearance of the homemade bread that was unusually thick with “twigs and rocks” in it. So, he complained to his mom about it. As a result, he was sent to school with a big grocery paper bag with all the ingredients in it to make his own sandwich, including a jar of “Grey Poupon” (something his Dad liked to put on everything). Fieri joked that this was why he decided to become a chef.

Players still have three lives and an British-accented female voice counting them into game play and challenge titles. One feature that the show took out early-on in the first tapings was a clone image of themselves of each contestant displayed on the TV screen on-stage to represent their “lives”, or chances. With strange and tedious games players must master, they need real clones to reach the elusive $1 million.