NBC’s physical challenge show “Minute to Win It” hosted by chef Guy Fieri, will feature “ten of the most beautiful women in the world”, former Miss USA and Miss Universe Pageants titleholders airing Monday, August 23rd before this year’s Miss Universe pageant which will be hosted by Bret Michaels and Natalie Morales.

HOLLYWOOD JUNKET reporter was on the set during this episode’s filming. Episode title “Last Beauty Standing” has the ten beauties competing against each other for the one million prize for their favorite charities. Ten stunts are played with the one contestant who completes all stunts is the one who is left at the end to play for the million dollars. Each contestant finishing each stunt in last place is eliminated. 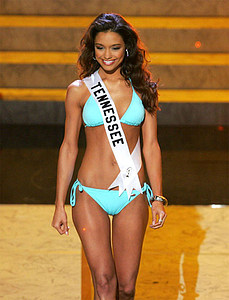 (photo: Miss USA 2007, Rachel Smith to play on “Minute to Win It”.)
The first game challenge given to the ladies is “Hanky Panky” where they must use only one hand to empty tissues completely from a tissue box. Other challenges include: “Face the Cookie” where the girls have to move cookies from their forehead to their mouth without using their hands, and lastly, the million dollar stunt is “Super Coin” which requires the last contestant standing to bounce and land one quarter coin off of a table and into a 5-gallon water jug while standing fifteen feet away from it.