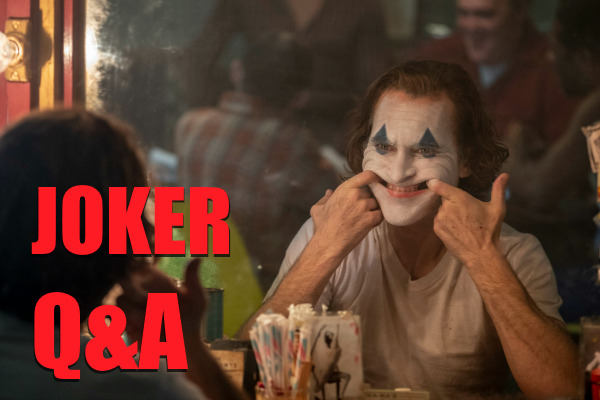 “You get what you create in Villains.”  – Todd Phillips

“Joker,” written, directed and produced by Todd Phillips (War Dogs, Due Date, Hangover trilogy) is a comic book origin story that takes place in 1981, yet tackles issues in the 21st century. “Joker” is nominated by the Academy Awards this year for Best Picture, Best Director, Best Actor. See the full list of Oscar nominations at the end of this article.

After a recent movie screening of JOKER director Todd Phillips was present for a Q&A session with staff writer from Vanity Fair. Phillips addressed his directing and writing process of Joker which stars Joaquin Phoenix as Arthur Fleck (“Joker”).

Arthur Fleck actually doesn’t come-up with his “Joker” title until towards the end of the movie when he is called to be a guest on a popular late night talk show whose host Arthur looked at as a father figure. Philips explains how he made the transition from movies such as “War Dogs” and “Hangover” to a superhero heavy weight film “Joker.”

Phillips said he was standing outside of the “War Dogs” premiere on Hollywood Blvd.,  stating that he never watches the movies with an audience because it’s “very nerve-wrecking.” He knew that while “War Dogs” was going to do fine, it didn’t feel like it was going to set the world on fire.  While standing there on Hollywood Blvd., Phillips was staring at a billboard for a superhero film across the street and thought that this is where the film industry is going.  To get people to go to the theater, you really have to do something that “cuts through the fog,” said Phillips.

Phillips said the appeal for coming-up with an origin story for a comic book villain was to align it with similar situations happening today in our political society.  This becomes evident when the poor population of Gotham city revolt against the wealthy in their rallies.  Their hero is Joker because he coincidentally was dressed as a clown when he killed three young elite men on the subway.  He became a heroic figure, also building on to the irony was Thomas Wayne running for Mayor and referring to the poor as “clowns.” Also in line with the United States president Donald Trump calling Democrats “clowns.”

Phillips took creative liberty and added the part about Thomas Wayne (portrayed by Brett Cullen) possibly being the father of the Joker. He deliberately left this open for the audience to guess whether it was true. Or, was Wayne covering it up all these years? It was maybe just an imagined incident created by Joker’s mother whom may or may not be mentally ill.

Phillips stated that he and his writing partner wrote 95% in New York.  Phillips decided to shoot “Joker” digitally in 1.85:1 ratio in order to capture the height of Gotham city.   He thought the only films that do big are the Superhero movies that “cut through the fog.”  When Obama was President, Phillips said, he wrote and directed three “Hangover” films.  Now, times have changed.  He said the original idea of “Joker” was about the lack of empathy in the world.  “You get what you create in Villains.”

In the comic book, Joker never killed Bruce Wayne’s parents, Thomas and Martha Wayne.  That was kept the same in this movie.  Phillips stated that it was more about Thomas and Martha died because of Joker.   In regards to the scene that was the most difficult to write?  Phillips remembers writing the scene where Randall (Glenn Fleshler) and “little guy” (“Gary” played by Leigh Gill) went to Joker’s apartment, and Joker kills Randall. The whole thing with the door.  “That was a really fun scene to write and to shoot. The scene tonally  goes in four different directions.  It starts with tension, moves to abject horror, and then comedy a little bit with the “little guy,” said Phillips.

Phillips also said in regards to this scene, is when it’s beneficial to have a writing partner.  Because at the end of that scene after Joker has let Gary go, Phillips wanted to add one more thing where the “little guy” knocks on Arthur’s door because he can’t reach the elevator button.  His writing partner said it was too much.  Philips said it was the ‘Hangover’ in him coming out.

However, Phillips does want everyone who watched “Joker” not to worry about Arthur’s neighbor Sophie (Zazie Beetz), whom he had an imaginary relationship with.  He said she’s fine, Arthur didn’t kill her.  She’s still alive “with a new job.”  Phillips said they had filmed a scene of Sophie watching the television when Arthur shot and killed popular late night TV host Murray Franklin (played by Robert De Niro) showing her reaction.  The scene was taken-out of the film because it detracted from focusing on Arthur’s point of view.

Phillips was asked how far could he take the audience before they cut ties with “Joker.”  He replied that Joaquin was in that mind from day one.  He makes you want to feel for him and take care of him.  Phillips noted that there’s not really one moment in the film when he turns into the Joker.  “It’s a build-up.”  How much did the character evolve or change after Joaquin Phoenix stepped into the role?  Phillips stated that it was always about Joaquin drilling down into the character.  Phillips said Phoenix struggled with getting the laugh down and with doing a DC movie.  But, it was mostly that he wanted to “dig deeper.”

The movie is also about the power of kindness.  If one person had of been kind, would it have changed the course of Joker?  Phillips didn’t think so.  On Joker narrating his life in the movie, the audience is unsure what’s real, and what’s just in his imagination.  Phillips addressed this in that the movie is “intentionally ambiguous” in that regard.  He wanted to keep the viewers guessing what’s real or what’s in the Joker’s head.  “We had fun backwards engineering it” stated Phillips.

“It (Joker movie) was really such an “out there tone.”  It had a $60 million budget, which Phillips stated is low budget for a Warner Bros superhero movie.  They started writing it in October of 2016 and wrote it for a year and a half then shot it.  When asked about the social workers’ interactions with Arthur, Phillips stated that they are intentionally characterized them in a cold, matter of fact type of way because he wanted to reflect that the system is broken.  “It’s been broken for a long time.”  He said it also depicted that the social services were really cut in the 1980’s under the Reagan administration.

The one quote from the movie that wraps it up, Phillips said is taken from the Joker’s diary which read “the worst part of having mental illness is that people want you to act like you don’t.”