HOLLYWOOD JUNKET was on the set of the first day of filming new pageantry-style game show for the “We” network, called “Most Popular”

The show is hosted by British host, Graham Norton, from “BBC America“. Terrific host. He’s very charming, comical, and possesses a great raw interviewing style that works spectacular for this show. Ladies, think of him as your best male gay friend. 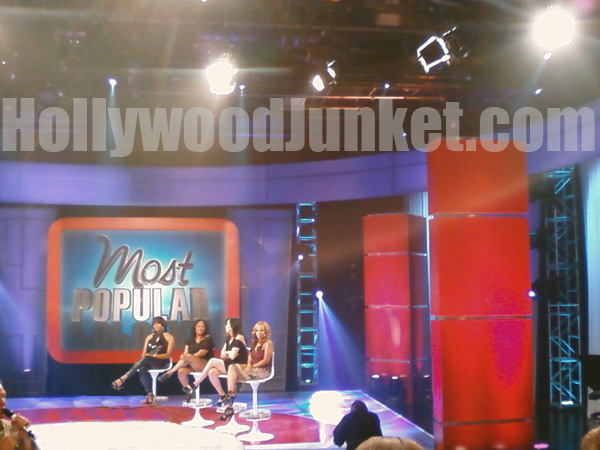 “Most Popular” stage with group of contestants.

The premise of the game is to have seven female contestants to go through a series of challenges, or questions on stage in front of 100 female members of a studio audience. The audience judges them based on character and looks to decide if they go on to the next round. One girl is voted off after each challenge. The last woman left standing has a potential to win up to 10,000. The winning contestant receives $100 for each vote for the grand prize.

At the top of each show filming, the executive producer makes a brief announcement on what the show is about, and how it was inspired — womens’ snap judgments about each other, as well as men, based on one quick glance.

Today’s set visit included a rare behind the scenes glimpse. Each contestant brings with them to the show, an “advocate”. This person is a friend, or relative who is called to the stage to reveal something unusual or surprising about the contestant.

Even though the audience makes their picks on the show. It is in fact, the producer’s of the show’s final decision that can override the audiences’ to determine who wins. Each “advocate” is nabbed for juicy stories about the contestant to tell on-stage. But, producers never tell them that they can not reveal conversations between themselves and the production. So, I imagine the contestants have enough forewarning before appearing on the show.

Once contestants and “advocates” arrive to set, they are kept in completely separate rooms. The producers of the show, remind “advocates” what they initially revealed about their friend or relative (contestants), and are suggested a “line” to say (advocates can change this line) once they go onto the stage to meet the host.

After the final three contestants are picked, that’s when the advocates are brought onto the stage one at a time. The host then asks the “advocate” what annoys them the most about the contestant. They answer the question while standing in front of the contestants. Some answers included: “She’s spoiled”; “She is bossy”; and “Holds onto her inner-fat self”. One contestant stated “they (advocate) said nasty things,” and that “all the intelligent girls with careers were the ones that were voted off”.

“The Challenge Rules” is a series of challenges each contestant must survive via audience’s votes to keep her on are the following: “Snap Judgment” is where the fate of the contestant is decided by audience based on her looks alone; In “Quick Fire”, each contestant introduces herself with just her name, and reveals an interesting fact about herself; “Clothes Call”, the contestant wears an outfit that best represents them. Producers of the show give them a theme such as, “first date outfit”, “interview outfit”, and “seducing someone outfit”. One episode, had one of the contestants in a bikini. “Picture Perfect” is when each contestant has a photo of herself shown to the audience on a large screen. Producers choose which photo is used. In this case, it was a photo that did one girl in. There’s also “The Moral Compus” which is a wheel with the following categories: money, inner self, relationships, work, family, and sex. Contestants spin this wheel and must answer a question from the category the wheel stops-on. However, the Host has discretion of which question he chooses to ask from a list.

Some audiences stated that they felt that some of the contestants were being untruthful, and that they could pick-up on that after two to three rounds of the game.

This particular round resulted in some unfavorable categories for the show’s produces. Several times, contestants spin landed on the “money” category. The “Standards & Practices (game show rules board) representative checked the wheel repeatedly, then allowed for the contestants to each spin again. This gave for more variety in revealing their characters. This also may have benefited,
some in the event that some voters in the audience may have changed their original decision of who to vote off.

During the final round, contestants must answer several questions about each other while hooked-up to a polygraph lie-detector test. This is done off-stage. Contestants re-enter the stage to personally ask each other the questions, and their answers are reveal if they are true or not. Same idea as “Moment of Truth”.

The show is scheduled to premiere Sunday, July 19th on the “WE” network. Check-out a sneak-peek here: http://www.wetv.com/video/25809310001/most-popular-sneak-peek