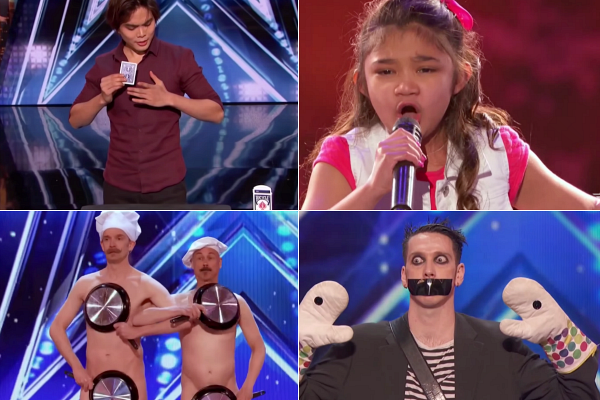 YouTube is a large part of that. The video-based platform was launched one year before AGT in 2005. But, the amount of internet users has grown immensely over the years, and only recently has the online channel rivaled the old days of the viewership numbers major networks once brought-in. So, it makes sense that the most viral acts on AGT are within the last few years. Thus, outside of some montages of acts, a lot of past acts from the full 15-year span of the show were skipped-over.

At the start of the episode, fans were reminded that the first host of AGT was no other than legendary television presenter Regis Philbin who recently passed away.  Then moving on to Jerry Springer as host, Nick Cannon,  and Tyra Banks. Then there were the original judges – David Hasselhoff (don’t hassel the Hoff!), Brandy, Sharon Osbourne, and Piers Morgan.

The episode was safely socially distanced by having current host Terry Crews in studio and solo to moderate the 15th anniversary special from a stage by introducing past clips which were counted-down from number 15 to the number one most viral act.

Though many of the clips had various past judges on the panel, this episode focused on pre-taped commentary from the four current judges who are: Howie Mandel, Simon Cowell, Heidi Klum, and Sofia Vergara who joined just this season. It was nice that the show kept things consistent by only talking to the current judges, and not making it unnecessarily long by jumping around to past judges and hosts for their input. It was also very insightful having the show’s creator and executive producer, who’s also a current judge Simon Cowell giving his thoughts and some behind-the-scenes tidbits.

Cowell said he couldn’t believe that it’s been 15 years because they couldn’t sell the show.  The pilot didn’t look that great he said and if it weren’t for NBC, they wouldn’t be here.

This episode also spotlighted some characteristics of the judges. One was Heidi’s love for the men, Simon being the favorite judge of fans and contestants, Howie being made fun of the most on social media for being the show’s over-reactor.

One major plus for the Golden Buzzer is, Cowell said “that moment lives forever.” He loves that acts can go viral because they go from being unknown, to being world famous.  “It can change your life,” said Cowell. Case in point…the following top 15 most viral AGT acts listed below:

In 2013, it was an act that elevated his bottom half while groaning.

In 2017, “Light Balance” performed their light dancing act in front of the judges. Cowell said “whoever gets 100 million clicks, yeah, your life is going to change.”

V. Unbeatable is from Romaine, India.   Howie said he didn’t know what to expect before they performed.  After, he said, he had no words.  The large group of about 20, performed stunts and acrobatics.  He said he has never seen an act like that in his life and doubts that he ever will again.  Cowell said he uses that act as an example for others, how important it is to practice.  Currently, they’re getting their own movie and they tour all over the world.  They won the AGT Champions season two.  “I can not be more proud of them,” said Cowell.

Shin Lim is the only magician that made it to their top viral countdown. He was on AGT season 13 in 2018 and went on to compete in AGT: The Champions season one where he also won.   Simon said he had just seen a card trick previously before Shin came out and wasn’t thrilled to hear that Shin was also doing a card trick.  Heidi said he did things they had never seen before.  “It’s just another level.”  Mandel said his act was viewed and shared more than anyone because  people couldn’t figure it out.  “Because the magic is real.”  Cowell said of Shin “somebody turned into a star in front of my eyes.”

As much as AGT is known for it’s far-out talent, it’s also known for some over-the-top danger acts. Simon Cowell said on watching danger acts, “there’s something compelling, I can’t explain it.”  He also described, ” It is terrifying. It’s like a roller coaster and gives you the best adrenaline in the world,” stated Cowell.

Heidi said he’s terrifying and he doesn’t speak.  Howie hesitantly got involved in his act by letting Crow place a pineapple on top of his head.  Crow then dropped hot candle wax on his eye lids to glue them shut, then double wrapped his head before proceeding to chop the pineapple in half with a sword. Howie said after coming home that night, his wife was really upset at him for participating in the dangerous act. All the judges said he was literally within inches of possibly getting his head chopped off.

Tyler is 11-years-old who started playing the violin and was being bullied at school, he said, because he had cancer.   Simon gave Tyler his Golden Buzzer.  He said, “I want to say something to the bullies” just before pushing the Golden Buzzer which moves acts directly into the Live Shows. Cowell said he and Tyler’s family has become closer over the years and isn’t surprised that Tyler has so many hits.

Celine sang Celine Dion song “My Heart Will Go On.”  Mandel said she delivered it as good as Celine.  Cowell told her she is “incredible.”

AGT is also notoriously known for some of the craziest, wackiest acts in the world. Cowell said for him they can’t be wacky enough.  Heidi said one of the wackiest she remembers is “Humbo Dumbo.” Another wacky act was “Men with Pans.”

In 2018, their act was 2 men dancing completely nude with covering themselves with just cooking pans while wearing chef hats. There were a few accidents here and there which were censored with black bars on TV screens!

Cowell said there was something about “Tape Face” that was just so weird.  “It really, really made me laugh.” He stood there with tape over his mouth and with hand puppets that were singing “My Endless Love” song by Lionel Richie.  Heidi said Tape Face showed that ” with a few good props and a really bright mind, you can come up with a really clever act”  Mandel said “it was hysterical and original.”  Mandel said he changed his mind on mimes, and he’s now a mime fan.

Cowell compared Grace Vanderwaal to past “American Idol” winner Carrie Underwood. He explained there was just something about her when she walked onto the stage. Howie said his favorite thing about the show is being surprised.  Grace sang an original song while playing the ukulele. Howie said he’ll never forget that moment.  Everyone could relate to that song.  Howie hit his Golden Buzzer for Grace.

Some of the most successful acts on AGT over the past years include: singer-songwriter Kehlani, singer Jackie Evancho, hip hop dance crew Jabbawockeez – one of the first dance acts to get their own show on the Las Vegas strip, magicians Matt Franco, and Shin Lim, comedy act Piff the Magic Dragon, ventriloquist, and season two winner Terry Fator who was offered $100 million.

This clip from 2017 showed Angelica Hale singing “Girl on Fire” during the Judge Cuts. Simon said Angelica is a “real fighter” and she’ll do well in life.”  The Guest Judge was Chris Hardwick who was completely taken with her and called her “unbelievable.”  He gave her his Golden Buzzer.  Mandel said she has the presence and voice of an angel which is why she went viral.

Mandel said Courtney was so “socially awkward.”  Simon said she could barely speak when she came out on stage.  She was so uncomfortable.  Cowell said he was thinking “let’s just get this over with because this isn’t going to go well.”  However, once she started singing a Janice Joplin song, it was a whole different story because her voice was so powerful. Howie told her he’s not Clive Davis and can’t give her a record deal.  But, he gave her his Golden Buzzer instead.  Simon said he was pissed that he didn’t have his Golden Buzzer himself to push for her.

Howie said 12-year-old  “Darci Lynne checked some boxes that we didn’t expect.” Darci said it was very hard to talk to people.  Her parents bought her a puppet when she was 10-years-old.   Mandel said ventriloquists did well on AGT but never by someone as young as Darci.  He added that she could have competed as a singer.  Mandel asked her how long she’d been doing it, she answered, 2 years.  It was shocking because of how great she was.  Simon told her he’s going to remember her in a week, in a year and he could see her being successful in Vegas.  Darci was Mel B’s Golden Buzzer.

It doesn’t matter how old you are on AGT.  You can be super old, or super young. “Everyone is welcome on AGT” said Heidi.   Howie said of the older contestants, “you see that these people never give up  They still have hopes and dreams.  It’s just heart-warming.”
Though he is asked a lot, Simon said he has no clue who the acts are before they come onto the stage.  Sofia said one thing she learned is you can not judge a book by it’s cover.  “You never know what you’re going to get.”   Simon said when you think you know what’s going to happen, you don’t.

One of the most memorable contestants was a hypnotist who hypnotized Howie Mandel into shaking his hand along with all of the judges’ hands when he went back to his seat.

A physical act called “Zurcaroh” first competed on France’s Got Talent weren’t acrobats or dancers. “I don’t know what they did.  but it didn’t look human,” stated a judge.  Also, “in terms of spectacle they were as perfect as you can get,” said Simon. He told the act it was the most incredible thing he’s seen.  Host Tyra Banks gave them her Golden Buzzer.  Simon predicted that the Zurcaroh leader could be the next Cirque du Soleil because he’s a genius.

Singer and pianist Kodi Lee left host Terry Crews and the judges speechless and in tears during his audition in 2019.

Simon called Kodi the most remarkable person and his mom the most amazing person.  Before his audition, Kodi’s mom explained that he is blind and has autism.  “Through music and entertainment, he can stand living in this world. It actually has saved his life” his mom announced on the AGT stage just before he performed.  As Kodi prepared, Simon said he was thinking “please be good” and thought he’d have to come back on another day.  Howie told Kodi that all judges and everyone in the room were up on their feet.  Howie also told Kodi, “we feel the authenticity of what you do and you’re a great talent.”  Simon told him he’d remember this moment for the rest of his life.  Judge Gabrielle Union gave him her Golden Buzzer.

Simon said whether it’s 10 years, 50 years, that audition will have the same impact.  That’s what makes me the proudest of the show is the impact. I always had this feeling that this show could live forever.  He said the only way that wouldn’t be true is if great contestants don’t show up.