NEW Live Element on THE VOICE Season 18 Plus Blinds Sneak-Peek!

NEW Live Element on THE VOICE Season 18 Plus Blinds Sneak-Peek! 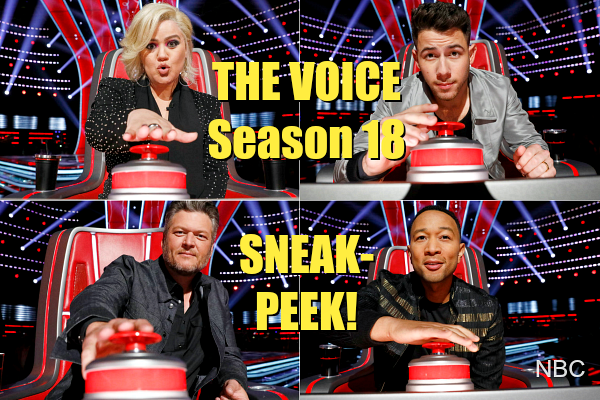 “The Voice” season 18 premiere will introduce a whole new slew of undiscovered talent plucked mostly from internet and Nashville obscurity, to catapult them into singing stardom.  Or, one can hope.  There may be an added bonus to upping the chances of that happening for one more artist in a new live element this season.  KEEP READING.

In addition to new and raw talent in a fresh season of “The Voice,” new coach Nick Jonas takes-over former coach Gwen Stefani’s place. He joined his brothers last season as advisers. They will return this season as his advisers during the Battle Round. It’s fun to watch Nick Jonas navigate his way in trying to score artists for his Team. Even if that meant exposing embarrassing notes taken in his notebook. Returning coaches are Blake Shelton, Kelly Clarkson, and John Legend.

In the words of season 17 winner Jake Hoot from Team Kelly, who talked about performing at the Grand Ole Opry (Country Royalty) recently, stated “before The Voice, I would have peed my pants.  When I walked out there (in front of six thousand people), there was a calmness. It [The Voice] forced me to grow and evolve.  I’m very grateful for my time on the show.”

Looking back at his own Blind Audition, Hoot remembered “how quiet it was when those doors opened up and you walk out there.  There’s so much talent.  I was just blessed to be part of that.”

In the first episode of “The Voice” season 18 Blind Auditions, viewers will see many young artists coming out of New Jersey, and everything in between from California, to the East Coast.  “The Voice” has always accomplished a good mix of artists of all ages and backgrounds.  Some of the stand-outs in night one’s Blind Auditions include: Todd Tilghman, Nelson Cade III, Darious Lyles, Todd Michael Hall, and Joanna Serenko.

TODD TILGHMAN is a 41-year-old father of eight.  Yes, he has eight kids!  After receiving a four-chair-turn, Todd told “The Voice” coaches “I need ya’ll so bad, you don’t even know it!” Todd said “we live in total chaos all the time.”  But, he doesn’t mind.  Before “The Voice,” Todd only sang at church.  He chose the coach whom he found the most “relateable.”

NELSON CADE III is from Los Angeles.  He was nervous about his ‘Voice Blind Audition, stating “It’s different to perform in front of heroes.”  He randomly played with Stevie Wonder at a venue.   After that, Nelson said he felt validated that he wants to follow music as a career.  He sang “Pride and Joy” for his Blind Audition.  Also getting a four-chair-turn, Nelson ultimately chose his hero for his coach.

DARIOUS LYLES is 30-years-old from Chicago.  Darious’ love for music and singing started at an early age.  However, his world was shook-up at age 18 when he found out he is adopted.  Darious chose to sing “How Do You Sleep at Night” by Sam Smith.  He dedicated the song to his parents, stating it must have been hard for them to keep that secret from him.  But, he understands why they did it.  Coaches Kelly Clarkson and John Legend turned for him.

TODD MICHAEL HALL is a legit rocker who was a breath of fresh air for the coaches.  Todd’s Blind Audition started with him on-stage shown from the coaches perspective without his back story playing first.  He belted-out “Jukebox Hero.”  Coaches John Legend and Blake Shelton turned for him.

Todd told the coaches he’s 50-years-old from Saginaw, Michigan.  Nick said there were many moments in Todd’s performance where he thought he hit his highest range.  Then, he went higher.  Blake said the reason he didn’t choose to sing Rock in he career is because “I sound like this.”

JOANNA SERENKO  is 18-years-old from St. Louis.  Her mom and grandmother are both nurses.  They support her dream.  Joanna sings in a band that does covers at Blueberry Hill, a venue where Ed Sheeran and John Legend have performed.  She sang “All My Loving” for her Blind Audition in a striped-down acoustic version.  She received a four-chair-turn.

These artists can look forward to learning more about the music biz from each Team’s savy advisers in “Battle Reality.” Joining Team Legend will be Ella Mai. Team Kelly will be advised by Dua Lipa. Blake Shelton’s Team will have the help of Bebe Rexa. And Team Nick will learn from his brothers Joe and Kevin Jonas.

There won’t be any Cross Battles this season, a live round where the viewers at home voted for their favorites before the Live Playoffs in season 16 where the coaches called-out their own Battles against each others Teams.  But, there will be a new added live feature to the Knockouts round.

The coaches Saves this season will end-up being part of a four-way Knockout  the next round.  As explained by “The Voice” executive producer Audrey Morrissey,  “that Knockout is actually going to be the first element being voted on by the audience.   We won’t find out who won that until the first week of the Lives.”

As for the Cross Battles which was introduced in season 16, if they will return?  Morrissey responded, “had we been able to do the taped version, it would have been more successful.  That said,  I don’t know that we’ll try it again.  If so, I think we’ll try a taped version to remedy some of the complaints about it. Or, what people didn’t like about it.”

Ultimately, Morrissey said the show’s main focus is what it’s always been.  That is getting “the stories of these incredible artists out with limited time, with limited weeks  We’re looking at the ways to do that so people really connect with these artists.  That’s an essential piece to any fandom.”

THE VOICE returns on Monday, February 24th with more talented artists than you can shake a stick at on NBC network.