1 VS 100: GSN Brings Mob Back with DANCING WITH THE STARS Judge!

THE TALK: Star Moms Keep It Real for Viewers!

Iconic John Lennon lyric “Nowhere Man” is not whom the man Lennon became. But whose lack of focus as a teenager lead adults to believe was where he was headed, as a “Nowhere Boy”. John Lennon would have been seventy years old this Saturday, October 9th.

Produced by The Weinstein Company and directed by Sam Taylor-Wood, “Nowhere Boy” explores the events and influences that shaped iconic musical rock-n-roll group, “The Beatles” founder John Lennon as a man and a successful songwriter starting from the age of fifteen to the age of seventeen. 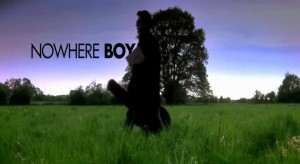 Many critical events take place during the span of those two years. As a young man, Lennon (Aaron Johnson) is just beginning to grasp the concept of becoming a man through his closest male influence, his uncle George Smith. The film starts with the pivotal transition in Lennon’s life when George dies suddenly leaving Lennon with a strong, cold Matriarch who is his Aunt Mimi (Kristin Scott Thomas) to continue to raise him on her own. The death brings his Mother, Julia (Anne-Marie Duff) back into his life.

“Nowhere Boy” depicts the contrasting parenting styles of the two sisters who love Lennon equally as much. Julia is like Lennon with her free-spirit, and rebellious way of life. She introduces him to rock-n-roll with main influence being Elvis, as well as giving him his first guitar. While her sister Mimi, provides the much needed structure and success mentality that ultimately enabled Lennon to combine the two traits perfectly by forcing himself to use his creativity by forming a successful band, “The Quarrymen”. With the addition of two extremely young talented musicians Paul McCartney first, then George Harrison, the early transformation of something great was on the cusp.

“Nowhere Boy” dives into the deep emotional impact of Lennon’s life as a young man while he tries to understand who he is and the events that shape him. His acceptance of these events allows him to become a man much quicker before he was ready.

The film’s portrays Lennon walking through a green field various times in the movie while en route to Julia’s house from Mimi’s and vice-versa. Symbolic of where Lennon was emotionally and physically. Not belonging entirely to either Mimi or Julia.

“Nowhere Boy” ends with Lennon’s journey to Hamburg where he is destined to develop ‘The Beatles”.