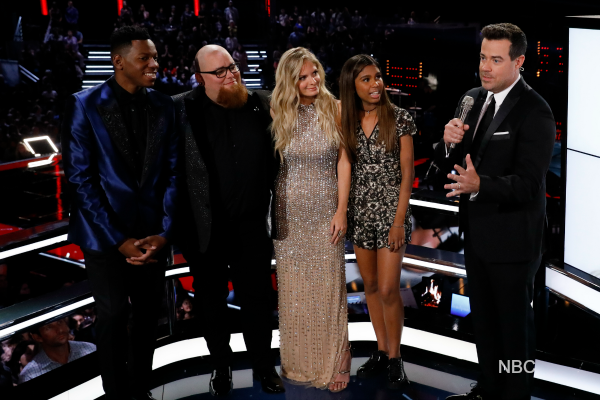 “The Voice” season 12 winner floated to the top after Monday’s votes were tallied from the Top 4’s three performances. During Tuesday’s show, the Top 8 artists got to perform again – this time along with music legends.

Artists performed three songs – a cover, a song with their coaches, and their own original song. The votes for the winner were based on all three songs from each artist. On Tuesday, before announcing the winner, host Carson Daly announced that every artist hit the Top 10 on iTunes with their original songs. 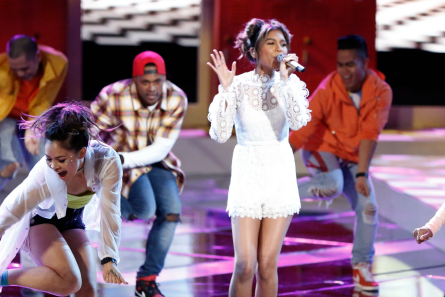 Aliyah’s first single called “Never Be Lonely” was a fun, pop song about having a crush on someone who wants to be just friends. Blake told her it has her personality, uptempo and sassy. Blake noted that he was 18-years-old when he made his first single. That’s three years older than Aliyah!

Gwen reacted to Aliyah’s song as “the funniest thing is watching you evolve in front of our eyes. With fashion – you really stuck to your age” by not putting heels on. Coach Blake said Aliyah’s song sounds like a hit. It sounds so perfect for you. To see that kind of performance from you, from the kid that came in here to Glee – so proud of you.” He added, “she’s such an awesome person to be around.”

Jesse said he never thought he’d make it this far. Especially since Adam was the only coach to turn for him during his Blind Audition. Adam said when he first heard Jesse, he thought he’s like a prodigy. Since Jesse is expecting his first child, he’s invested in this finale on such a deeper level. He sang “Taking it to the Streets.” Jesse stated “I want to take what I do and what I’ve learned and show the world how I’ve grown.”

Alicia called him “dope, perfection. Adam has kept you in this genuine space that’s all your own and you really shined tonight.” Adam said “I’m happy we got through this whole thing without deviating who you are. Obviously I believe this guy should win this whole thing,” and added “he killed it!”

CHRIS BLUE & ALICIA KEYS sang “Diamonds and Pearls.” Alicia called it the best song ever written by the greatest artist to have ever lived, who is Prince.

During Monday’s show Blake said, “Lauren is the artist we’ve been waiting for. A one of a kind, story-telling Country artist.” Blake also noted, nobody on his team is more believable than Lauren. Blake said he has a plan to help make Lauren not plateau by giving her “one of the greatest country songs of all time to sing, “The Dance” by Garth Brooks. “The main growth is her confidence and ability. The next season, contestants could be singing her song because that’s the kind of impact she’s going to have,” Blake said.

Although upset that Lauren isn’t on his team, Adam said they all loved her voice since the beginning, and “it’s getting boring how great you are.” Blake said it’s one of the most important Country songs in Country music and Lauren made him feel like he was hearing that song for the first time.

Chris’ original single is called “Money on You”. After his performance, Coach Alicia said “everyone in this room, there’s an electricity that happens. They felt you, they knew you when they saw you. You occupy the stage 100 percent,” and she told him “you are ready”. 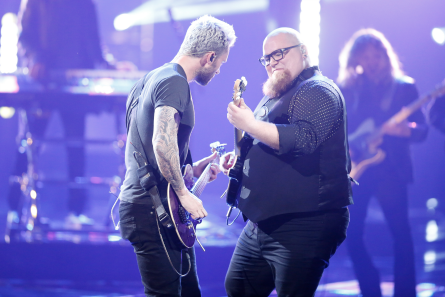 JESSE LARSON sang “Woman” his original single. Jesse said he’s been thinking about his wife and the lyrics are about giving love and support. If it had not been for her, he said he wouldn’t be there on “The Voice.” Adam said he feels that their mission is accomplished. After his performance, Coach Adam said “Jesse Larson, we’ve been doing this show for 12 seasons, and the show has evolved and changed. In many ways artists can become successful. The show is called ‘The Voice.’ I want to get back to that tangible thing….this is the man. It’s what ‘The Voice’ should be about.”

The youngest artist to ever be in “The Voice” finale, said she picked Blake because “he really takes care of his people. Why would’t you pick Blake?” she said. Daly reminded viewers that Labrinth song “Jealous” was her break-out moment on the show. Blake advised her to “hit people with a performance that will remind people of who you are at this moment.” He picked “Signed, Sealed, Delivered” by Stevie Wonder. He said Aliyah’s “a way better singer now.” Blake thinks she can be the next big Pop star, and “just a star” in general.

After her performance Blake told her the balloons coming down on the stage is a sign to her possibly winning. “It’s like tomorrow night.” He added, “every time you get on that stage you make people smile and forget their lives for a moment.”

Lauren recorded her single “Deja Vu” that she has a personal connection with. Lauren stated that even in Nashville, she hadn’t had the confidence to record anything on her own. She said after getting out of a relationship, you still see them in your life. That’s what the song is about. Blake said Lauren is going to be some producer’s dream. Once the live shows started, she said she saw a glimpse of Lauren. Blake told her “this is what you’re born to do. It’s going to be like deja-vu”. Coach Blake congratulated her on writing her “number one hit song.” He also said “we’ve had some incredible moments in 12 seasons. I don’t know if we ever heard an artist come out and do a song that beautiful and perfect”

During the season, Chris has sang Al Green, Bruno Mars, Smokey Robinson (in Blinds). Alicia said Chris can do everything. “Take Me to the King” Chris said that was an important song because that’s what his parents taught him. He had the #2 on the overall charts on iTunes. On Monday, Chris sang “Rhythm Nation” by Janet Jackson. Alicia said “just get ready to have a ball”. Chris said “this song will embody everything that I am musically” 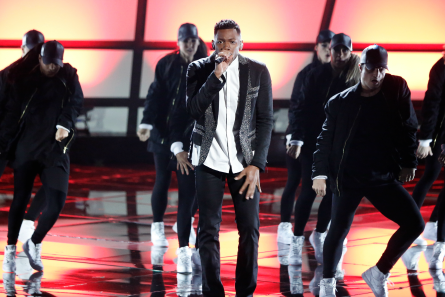 Alicia said you showed people that you are EVERYTHING!! In you can be as quiet as you were in ‘Diamonds and Pearls.’ Can do an original single. You can come out and do one of the most iconic songs and you can handle it! We can say we started Chris Blue’s career tonight!!”

Tuesday’s ‘Voice finale brought back the Top 8 who were each called by their coaches to tell them the great news that they’d be performing with legendary singers on “The Voice” stage.

For Brennley it was “Rascal Flatts”; TSoul and Vanessa Ferguson performed with Gladys Knight; Lauren was paired with “Little Big Town”; Adam fittingly put Jesse Larson with CeeLo Green whom he thinks Jesse sounds like.; and Chris Blue sang with Usher. 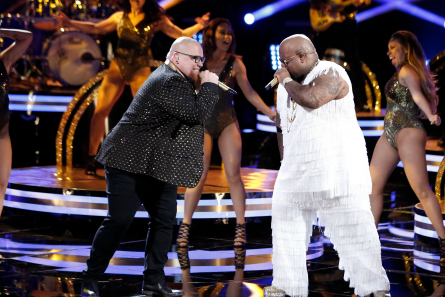 “The Voice” also welcomed back coach Miley Cyrus who sang her new “Malibu” song, and will be coaching in season 13. Jennifer Hudson from “American Idol” performed “Remember Me” and she’ll be joining the show for the first time as a coach next season. 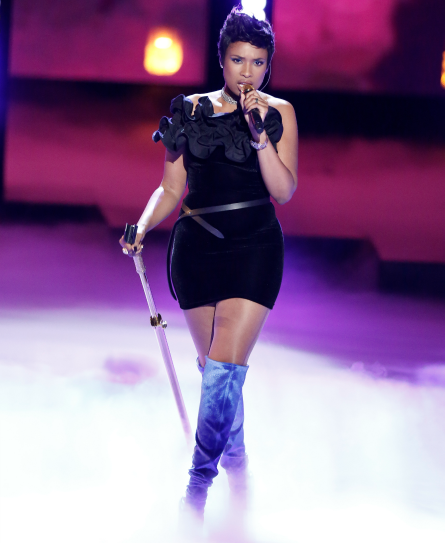 The show did a comedy spoof with Alicia stating that her strategy this season was “to get the other coaches to help me without them even knowing it. To be my puppets.” A funny spoof of the coaches as puppets followed.

Host Carson Daly had the Top 4 artists line-up on stage to ask them what they’d like to say to their coaches before awarding them each with brand new Toyota Rav 4 cars. At 15-years-old, Aliyah screamed with excitement “I can’t even drive!”

After Miley Cyrus performed Malibu, the Top 4 got on-stage again. This time, it was the moment of truth. Time to find out who the season 12 winner would be.

Before that, Aliyah stated that she’s humble that she’s made it this far and never in her wildest dreams thought she’d be there. Jesse said deciding to do music was the best decision of his life. Chris said winning the finale for his fiance would mean that he didn’t give up on her. Lauren thanked Blake for everything. Chris stated to Alicia, “I feel like we were suppose to be in this moment tonight. I gained an amazing coach and I feel like your’re my friend. This won’t be he last time we’ll be on stage together.” 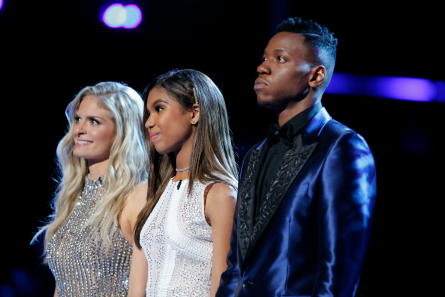 Then, Carson Daly announced fourth place as going to Jesse Larson (Team Adam). Jesse told Adam that he saw something in him that he didn’t see himself. “You helped me find a new version of myself.” Third place went to Aliyah Moulden.

The remaining two artists were Lauren Duski and Chris Blue. Daly said it was “one of the closest results that we have seen on this show.” The winning voice went to CHRIS BLUE! He sang his coronation song “Money on You.” 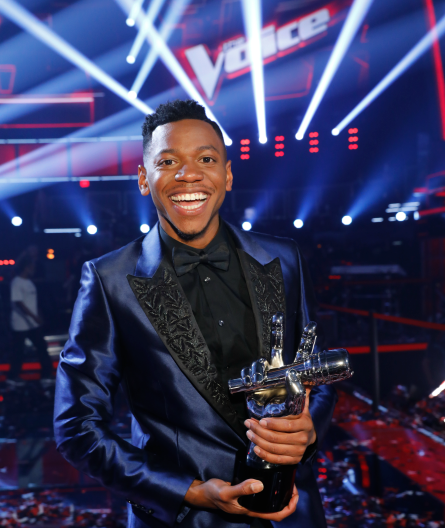