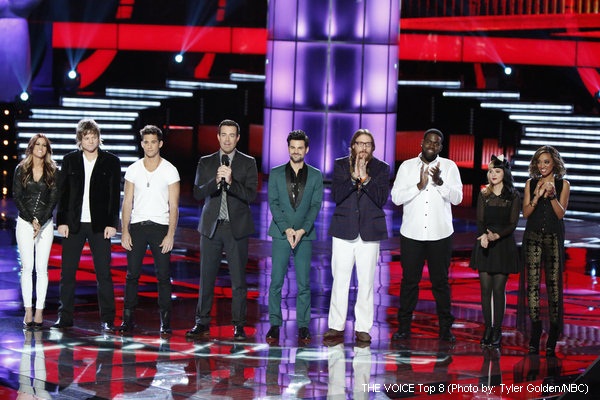 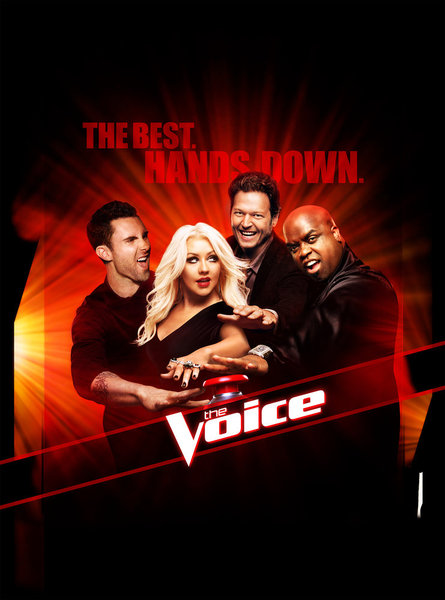 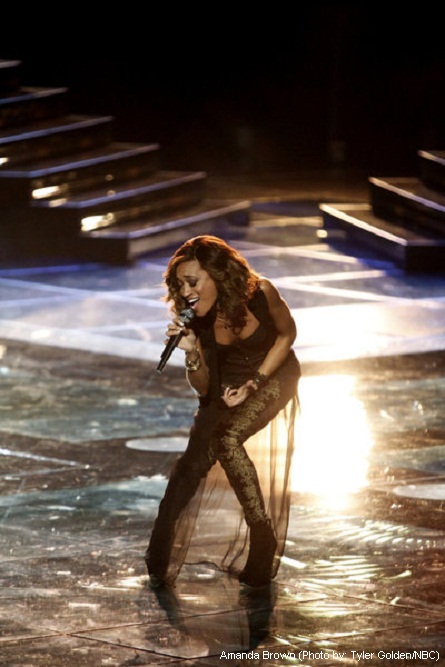 Amanda Brown from Team Adam, performed “Someone Like You” by Adele.
The first coach to respond to Amanda’s performance was Blake Shelton who said, “Adam is being hard on people doing Adele songs and not doing it well. You made it Amanda Brown. You are a rocker!”

Christina reacted with, “Another really dynamic, powerful vocal. You definitely went for something different. You definitely changed it up.” However, she also said, “waiting for you to change up with that same magic you had with ‘Dream On’. You did a great job tonight.”

Cee Lo Green stated to Amanda, “The real reward is in the risk that you take.” Her coach Adam Levine commented, “I am hard on people for doing Adele songs. It’s a risk to do a song by someone who is so adored by so many people all over the world. You took the risk and said ‘I’m going to make it mine and perform it the way I want to.’ Tonight you knocked it out of the park.” 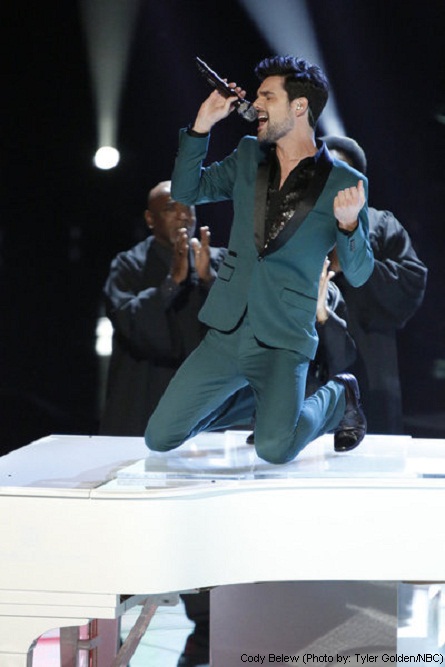 Cody Belew from Team Cee Lo performed “Somebody To Love” by Queen.
During rehearsals, Cee Lo said, “I believe that the torch can be passed from Freddie Mercury to Cody.” Cody stated that growing up in Arkansas he was surrounded by country music. “Nashville wasn’t working for me…I found myself questioning everything,” Cody said when he kept hearing “no”.

After Cody’s performance, Adam said, “that was great. That’s one of my favorite songs. Freddie Mercury has the ability as a singer to expose all my weaknesses. So you have to be careful.”

Blake observed, “So awesome when you see the right connection being made. It’s just the perfect combination.” Christina commented “You are definitely a risk taker and you’re not afraid of changing it up. It was interesting if that you keep changing it up and showing a different side or who your are.” Christina then threw-in a playful comment, “Even though you’re not on my team, we need to hang out after the show.”

Cody’s coach Cee Lo stated “What a wonderful job. I’m so proud that you have grown. You’re strutting through with so much poise and confidence. Many people would love to have that. The encouragement and confidence. We are making some quantum leaps. Most importantly, I’ve found a really good friend in you Cody.” 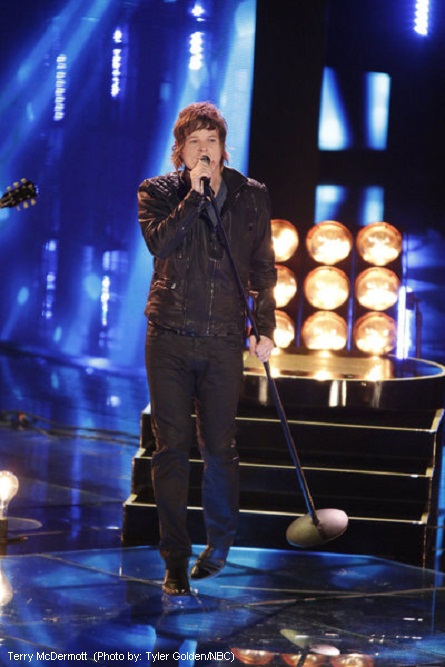 Terry McDermott from Team Blake performed “Over.”
He’s the Scottish rocker who’s showing his sensitive side! With a bit of envy, coach Blake Shelton said, “I think this song is better suited for him than it ever was for me. The audience needs to see a different side to him.”

Terry said that the biggest challenge is the fact that Blake has set such a high standard for him.. Terry also said, “I want to bring success to my family,” and it’s been hard to be away from his wife and kid.

Christina commented on Terry’s performance, “You’re always such a solid vocalist. Your voice really shines when you go higher. It was a little unexpected for me this time around. But a really solid voice.”

Cee Lo said to Terry, “You sing in straight lines. I’m a big fan of your voice. You remind me of the legacy of DeVo and other legendary rockers. Keep going there.”

Adam joked to Blake, “So that’s what that song is suppose to sound like. Just kidding. There was an amazing precision. It’s inspiring to me. You’re one of the best singers in this competition.”

Terry’s coach Blake responded, “You just performed that song the way that I wish I could. You did all the things vocally that I can not do. You just proved yourself as the real deal. You’ve been the classic rock guy . You just became the real deal. You can do anything that you are handed. That is rare and unbelievable. You are a star!” 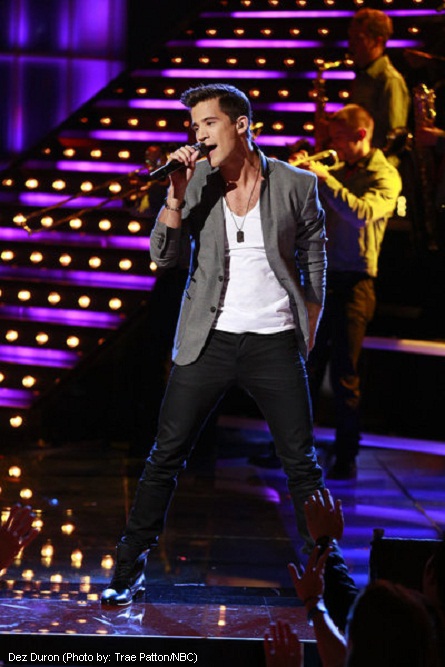 Dez Duron from Team Christina performed “You Smile” by Justin Bieber
Dez stated that “Music is all I ever wanted to do my whole life. My dad was proud when I got into Yale University, but I had to go (to The Voice”).” He said his Dad was disappointed that he turned down “a sure thing” like Yale University for a career in music. Christina described Dez as “He’s not a one trick pony,” and that he can do a pop song or a crooner song.

Dez Duron is the last artist standing from Team Christina. After his performance, Cee Lo commented, “I think you’re a great vocalist. This is not your best performance tonight.”

Adam said, “I want to just applaud you for walking away from something. Though I might have wanted to kick your butt if I was your Dad. But you really have a lot to be proud about.”

Blake said about Dez, “Last week was a big deal for your performance as for me. It’s the same kind of groove. It really works for you.”

Dez’s coach Christina Aguilera stated, “You killed it, killed it, KILLED IT. We’ve seen with Cee Lo with the guitar. I forgot his name…not wrapped up into one package, that way that you can. Everyone wants to hear that one album from Dez Duron.” 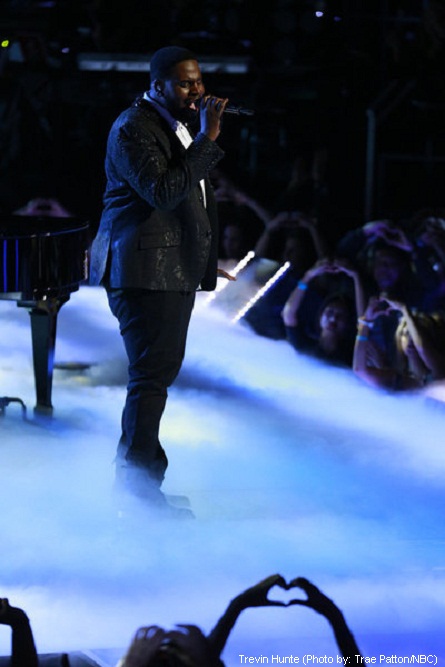 Trevin Hunte from Team Cee Lo performed “The Greatest Love of All” by Whitney Huston
Trevin said that in school, his brother pushed him to play football. But his Mother didn’t have enough funds to pay for the football uniform. Trevin said he always wanted to sing. “I’ve been through a lot of struggles in my life. I want to show people that you can be bigger and be anything you want to be. I’m a testament to that” stated Trevin. His performance was backed by a choir, the “Powerhouse Show Choir”.

Adam said he was in Heaven, or so he hoped – “I really hope that when I die, hopefully I”ll go to Heaven and this is Heaven,” he stated due to Trevin’s singing with the choir. “You can sing anything you want. It doesn’t matter. You can get up here and really blow us away,” said Adam.

Blake said, “you’re an amazing singer. I’m glad to see you. I really think that with this song – they will say this is the guy we have to beat.”

Christina kept her comment short and sweet with, “Your vocal ability is a monster beast. A gift from God.”

Trevin’s coach Cee Lo Green said, “I’m very proud of you. A wonderful performance. I’m just truly indebted. Your voice and the humility that you practice and how thankful and appreciative you are.” 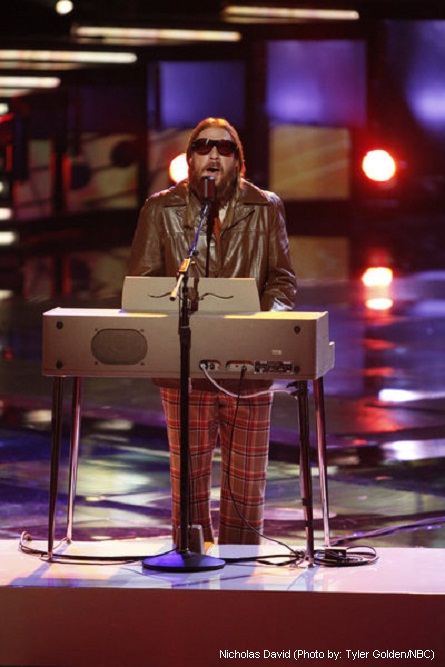 With a third baby on the way, Nicholas said that he didn’t care what the gender was, “as long as it’s healthy.” Nicholas said that while his kids are growing he’s growing “this” – his beard. After his performance, Adam said, “Every song every week is on my list of dream songs to sing in front of a crowd. I love this element. You sing these incredibly soulful songs. I’ll be a fan forever as a singer, as a human being.”

Blake reacted, “I didn’t realize until this week that you’re blind” referring to Nicholas’ deep shaded sunglasses that he appeared in during his performance. “Seriously I have to crack jokes about you because that’s all I have. Thank you for letting THE VOICE be the stage that introduces you to the world.”

Nicholas’ coach Cee Lo said, “I love you so much. What would life be without music that is also a healing property. We could use more of that healing. America vote for this man!” 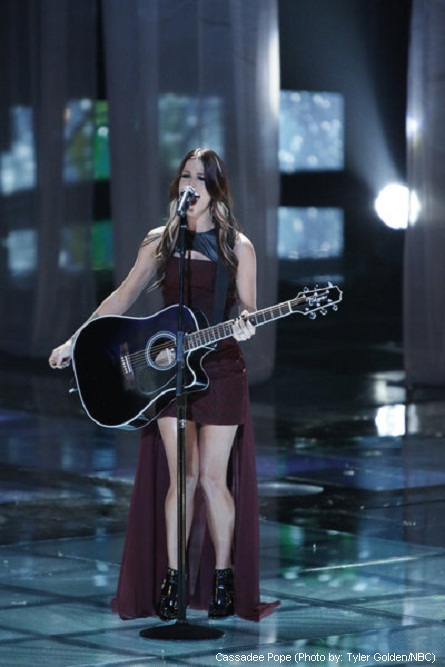 Cassadee Pope from Team Blake performed “Are You Happy Now?” by Michelle Branch
Blake told Cassadee, “You get me excited about music again…I heard that story about your Dad. Still haven’t heard anything from your Dad?” Cassadee shook her head. She said, “I look at Blake as a crazy Uncle who’s always looking out for me.” Blake observed Cassadee’s talent as, “even though Cassadee is not a country artist, she has this unique ability to tell a story.” Cassadee described the song, “the attitude in the song is spiteful.” Maybe that’s why Blake brought-up her Dad.

Adam Levine stated that his band “Maroon 5” used to open for Michelle Branch at The Roxy on Sunset Blvd. in Los Angeles. “Don’t go to The Roxy. They screwed us over. The hardest thing to do is to follow it up” (her performance last week).

It was Cassadee’s Mom’s birthday. Blake said she couldn’t have a better birthday [for Mom] than coming out here and dominating. “You just sang the crap out of that song. Thank you Cassadee for being on my team!” 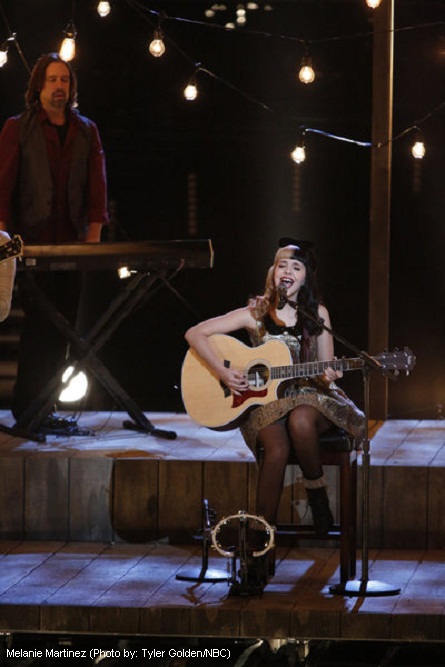 Melanie Martinez from Team Adam performed “Too Close”
“This song is about being close to someone,” said Melanie who is going through a break-up with her boyfriend. Adam said, “Our first album was a break-up album.” He also said about Melanie, “I think this is a great song that expresses her raw emotion right now.” –
Adam told Melanie, “Bring the Melanie that we all fell in love with.”

After her performance, host Carson Daly turned to her and said, “I hope whatever guy that is you were breaking-up with was watching that.” His attempt to make her feel better, failed miserably as Melanie looked like she was about to cry.

Blake stated, “Your voice- it just melts me . You’re one of my favorites. I’m so glad to see you back on the tambourine.” Christina reacted, “It fit you like a glove. The whole tambourine thing. I loved it.”

Cee Lo said,”So cool and so unique I think this was a cool rendition of a great record. You made it your own.” Melanie’s coach Adam Levine said, “I love you. When you’re going through a break-up, the point is you want to make to the person that you’re having trouble with is to feel dumb. You did that. I love seeing an artist up there that is concerned with every aspect of the performance. I love how you present yourself. That separates you from every artist in this competition.”