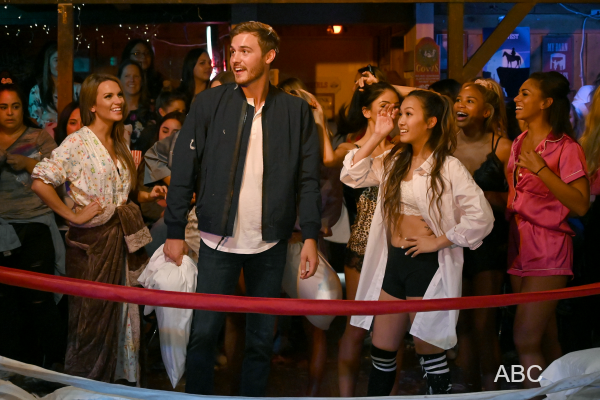 ABC’s “The Bachelor” season 24, Peter Weber came off a season of getting blind-sided after being dumped by “The Bachelorette” Hannah Brown.  He stated that he fell in love with Hannah Brown, “But, unfortunately, I was left with a broken heart.”  Peter’s first one-on-one date in this episode was with Victoria P.

Last week’s episode ended with the “champagne gate” drama between Kelsey and Hannah Ann after Hannah Ann mistakenly opened and drank Kelsey champagne that she had brought for her and Peter.

Victoria P. had the first one-on-one date with Peter this week.   Peter took her on a local tour of his home town (down the street from “The Bachelor” mansion).   But first, they popped into a local General Store to swoop-up some cowboy attire in preparation for line-dancing.  Peter took Victoria to his favorite spot – “The Canyon”  where they line-danced.

Back at the house: Kelsey and Hannah Ann were still hatching it out over the champagne bottle in question.  Victoria F. made the comment to the other women that they’re going into week three Rose Ceremony and they’re still talking about a champagne bottle being popped.

Peter and Victoria P.’s dinner took place at an airplane hanger where Victoria shared a hardship story about being “the rock” for her mom and her sister after her father died when she was very young and her mom fell into addiction.  They lived in a number of shelters during this time.  Victoria told Peter that much of her life, she didn’t feel worthy of where she is now.  Peter told her that he had “a very special moment” where he knew this would work and said he received a sign after saying a prayer.  Peter told Victoria that is feels so “insanely right” with her.

Back at the house: Sydney was becoming aware of Alayah’s fakeness and she suspected something was up with her.

Eight women were selected for the group date:  Kiarrai, Sarah, Tammy, Kelley, Shiann, Savannah, Sydney, Alayah.  The group date card read: “I love surprises. I hope you do too.”

Demi showed-up in the Bachelor mansion “to help Peter.”   She had the help of her “hench women” (Champagne & Killer) who woke the girls up by hitting their bed with feather pillows.   Demi announced that she was there to help Peter plan the date with the girls.  This included providing pajamas and some girls got lingerie for this group date.   Savannah, however, was less then thrilled to get a mumu to wear for the date.

They road with Peter to a Saloon where, upon entry, a pillow fight was happening inside a boxing ring.  Demi stated that because there’s a lot of tension going on in the mansion, this is an opportunity for this to let off some of that aggression.  “And really hot to watch too,” added Demi.

This “Monday Night Pillow Fight” event was equipped with commentary from Fred Willard and host Chris Harrison at Demi’s Extreme Pillow Fight Club.  Demi had fun fighting names for the girls.   The first fight up was Tammy “the Taminator” vs. Kelley “the prosecutie”.  After Tammy tackled Kelley onto the ground, falling outside of the ring, Tammy got disqualified.  Then it was Shiann vs. Savannah; Alayah vs. Sydney; and Sarah vs Kiarra.

In the final championship round, Demi chose two ladies whom she said she saw the most effort from.  They were Alayah “The Royal Pain” and Sydney “Sid Vicious.”   There was a lot of hair pulling, shoving each other to the ground and of course, pillow hitting.  Finally, Alayah won by sitting on top of Sydney where she couldn’t get up.  Sydney called her “an elephant” sitting on her.

During the After Party, Alayah told Peter that she wanted to show him that’s she’s willing to put up a fight for him, as seen during her pillow fight with Sydney.  Peter told her that there’s  something about her that really draws him in.   Peter stated that there’s a positive energy about Alayah and he’s excited about the future.

After Alayah returned from her talk with Peter, Sydney pointed-out that it’s obvious that Alayah is not being her true self and she seems that she’s still in a pageant because everything about her is “so rehearsed.”  But, she’s not being her real self, which is what Peter wants to see.  Alayah had no immediate response to Sydney, who then walked away.

Sydney warned Peter of how some of the women weren’t being real with him and are one way on-camera and completely different off-camera without directly calling-out Alayah.  This prompted Peter to have a sit-down with the ladies to address his concern, and in the process, put Sydney on blast.  Sydney then mentioned that it was Alayah who seems to “put on imagery.”  After Peter’s speech and exit, the two women went at it.  Alayah brought-up a good point which was that Sydney doesn’t know her outside of the show.   Therefore, doesn’t know her true reactions, etc.. personality.  Then Alayah went and cried to Peter about it.

After Peter’s speech and exit, the two women went at it.  Alayah brought-up a good point which was that Sydney doesn’t know her outside of the show,  therefore, doesn’t know her true reactions, etc.. personality.  Then Alayah went and cried to Peter about it.

Peter gave Sydney the Group Date rose for putting him first when she told him about Alayah.    Chris Harrison stopped-by the mansion to announce to the women that there will be a pool party for them with Peter instead of a Cocktail Party before the Rose Ceremony.   Peter did stop-by, but not to have a pool party because he was feeling too many doubts.  He called Sydney to have a private conversation with.

Peter talked to all the women about Alayah.  It was as if he made the whole day a McCarthy type hearing on if Alayah was innocent or guilty of the fakeness that Sydney was accusing her of.  They all confirmed what Sydney said about Alayah “turning it on for the camera.”   When Peter sat down with Madison, he forgot all about the drama.  They reminisced on their one-on-one date from last week with his family.

Victoria P. revealed to Peter that she did know Alayah before going onto “The Bachelor” in the pageant circuit.  But, Alayah asked Victoria not to tell ‘Bachelor producers that they know each other.  Victoria added that  Alayah mentioned to her that she’s really into all the opportunities that will come after being on the show even it she doesn’t end up with Peter.  “Maybe she isn’t the one for you” Victoria told Peter.  Thus, it was time for Peter to pull Alayah for another private conversation.   Alayah addressed the lie she asked Victoria to tell as a way of not getting disqualified from getting onto “The Bachelor.”   Peter ended their conversation with “I have a lot to think about.”

Peter gave rose to: Kelsey, Hannah Ann, Natasha, Lexi, Madison, Shiann, Kelley, Kiarria, Tammy, Savannah, Deandra, …Then, Peter took a break from the Rose Ceremony to go talk to Chris Harrison.  He was having doubts about giving a rose to Alayah.  Peter came back to the Rose Ceremony.  Then Chris Harrison entered the room and took away one rose from the two that were left.  “This will now be the final rose tonight.”

Peter gave the final rose to Mckenna. NOT Alayah. Sydney, and Victoria P. already had roses from their dates.

Women who went home:  Alayah, Jasmine, Alexa,  Peter explained to Alayah that “it wasn’t easy.”  Alayah noted that it was Victoria P’s comments that sent her home.

Not long after the ceremony, Peter is shown talking to one of the producers of the show telling her that he didn’t feel good about letting Alayah go.  She asked him why did he do that in the first place?  Lol!  To be continued…

NEXT WEEK:  The drama continues when Peter is shown going on a one-on-one date with Victoria F. and she confesses to formerly dating the singer who’s serenading them!  Then, Alayah returns.