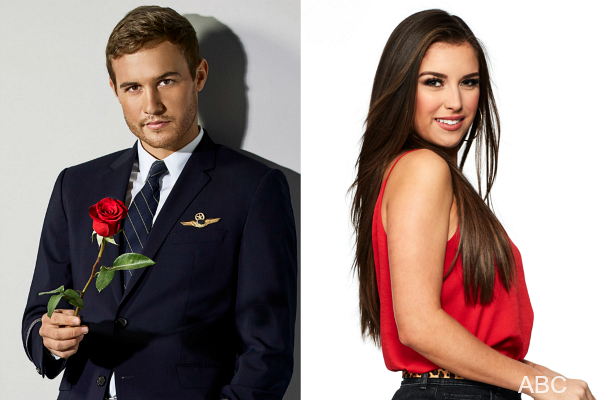 “The Bachelor” continued in Cleveland this week. Peter’s first one-on-one date was with Victoria F. this week.  Part of the date included an unsuspecting reunion with Victoria and her ex-boyfriend.

During their time together, Peter and Victoria discussed kids.  Peter said he wouldn’t want three because one kid would be sitting by himself, for instance like on a roller coaster ride that they had just gone on.  Peter said, “here’s to having even kids.”  Victoria said about Peter in her confessional, “it feels very natural” with him.  Then, for some real fun!  Peter surprised Victoria with a private Chase Rice concert.  Chase is not only a Country music star, but also Victoria’s ex-boyfriend.  She was freaking out!

Rice serenaded Peter and Victoria along with a huge crowd.  She said “the situation is so uncomfortable” and “never in a million years would I have expected this.”  She then became overwhelmed when Peter conversed with Chase after his performance.  Then after Peter was done Victoria pulled Chase to the side to talk in private.  She told him she was going to tell Peter about their past because she doesn’t want to start with Peter with lies.

Before their dinner that night and before Victoria told Peter about Chase Rice, he said in his confessional that if things keep going right with Victoria, “who knows…maybe Chase Rice will be singing at our wedding.”   Then enter Victoria.  She started off that the whole date was “amazing” except….”Chase and I used to date.”  Peter was dumbfounded.  Then just said it was “weird” a number of times.  Victoria confirmed that she didn’t have any feelings for Chase anymore and they broke-up because his lifestyle didn’t align with hers.

Back at the house: The group date card arrived with the names – Victoria P., Kiarra, Kelley, Deandra, Madison, Lexi, Shiann, Tammy, Sydney, Hannah Ann, Savannah, and McKenna.  That meant that Kelsey got the second one-on-one date.

Peter told Victoria that he wants her to have confidence in them.  He appreciated her opening-up to him and it not only was awkward for her, it also took guts.  So, he gave her the date rose.   Peter considered that they took a really big step forward during that date and it was “impactful.”  That’s what he’s looking for in someone.

Peter’s group date took place at First Energy stadium because playing football was one of his passions in high school.  He brought two renowned football players to train with the girls.   Victoria P. ended-up watching from the sidelines due to her hurting back.  That was a perfect excuse for Peter to massauge Victoria’s back.   The rest of the girls broke-off into two teams where they competed for more time with Peter at the After Party.   The losing team was sent home right after the game.  It was a tied game, which the girls were bummed about because with a full house, that meant less time for each of them with Peter during the After Party.

AFTER PARTY:  It was 13 girls at the after party which was frustrating for them to compete for Peter’s time.

Some drama ensued once, Alayah, eliminated contestant from last week returned during the after party to talk to Peter.  Once Peter heard Alayah’s side of the story, then heard Victoria’s rebuttal, he questioned and doubted Victoria P.  Then, Peter admitted to making a mistake in letting her go.  He asked if she’s come back.  Alayah agreed, only if they can get past all this drama.  With that, the night was basically over and Peter had just enough time to tell the girls why he’s letting Alayah come back.  The women were upset that Peter gave the group date rose to Alayah, who wasn’t even on the date.
McKenna suspected that Alayah came back for more than to just date Peter.  Tammy reacted “the drama has risen from the dead.”   The next morning, the girls decided to make a plan of attack to go up against Peter after his date with Kelsey.

Peter and Kelsey explored Cleveland together on their date.  Their date included go cart racing. They won the race and a trophy.  During dinner, Kelsey told Peter that a lot of her character traits come from her parent’s divorce where she was the one to find her Dad’s ‘Dear John’ letter to her mom.  She didn’t see him for twelve years after that.  Peter said he can relate due to his mom and and his grandmas struggles together when they first arrived to America.  He said Kelsey is a stronger woman for it.  Peter loved Kelsey’s “realness” with him and gave her the date rose.  Peter was thrilled with the date and felt that he could see himself marrying her.

Back at the house: The girls found out that Alayah had done some snooping while she was off the show and was on her phone researching what was being said.  She told the women about Victoria F. and former boyfriend Chase Rice.  Natasha made an excellent point in her conversation with Sydney when she said Peter “may not know what he wants.  That’s the big problem here.”

At the start of the Cocktail Party, Deandre and Natasha both told Peter how it was a slap in the face that he gave the rose to Alayah who didn’t bust her tail on the football field during the date.   Peter said he’s not perfect and he gave Alayah the rose because he felt pressured last week to let her go, but it wasn’t what he really wanted to do.  Then Peter asked Victoria P. to talk in private.  She went, although she told him that she didn’t want to talk and showed some aggression towards him.  Victoria warned Peter of how manipulative Alayah is.   The girls argued amongst themselves and told Alayah that she’s only back to be back on the show, and not for Peter.

The girls continued to argue and that’s where this episode ended.

NEXT WEEK: There’s more drama when something happens during a bikini group date. Then, someone leaves in an ambulance.