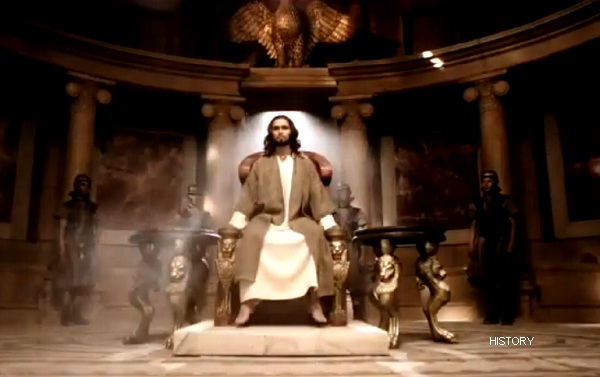 Created and produced by Mark Burnett, “The Bible” which is a ten hour series premiering on the History channel on Sunday, March 3, 2013 is what Burnett describes as an “epic” series that joins the New Testament with the Old Testament which is the result of a four year project with wife Roma Downey best known from her starring role in “Touched by an Angel.”

The goal of The Bible:
The goal of this show that Burnett says he expects is to expose the young audiences who, due to the lack of Bible studies in public schools, to “the best stories in history” of the Bible. His experience growing up in Europe was quite the opposite. He said, “The Bible is sacred to our family . We believe very much in the Bible. I don’t remember a time when there wasn’t a Bible in my house growing-up in Europe,” said Burnett. The undertaking and development of the project was suggested by his wife Roma in 2009 after seeing numerous documentaries on the topic. He admits that at first, it was “daunting,” he said. “I thought about it, then we hugged, and I have never looked back in four years.” Production of “The Bible” required Burnett and wife Roma to be away from their family for six months while shooting in Morocco.

Where ‘reality’ fits in with The Bible:
Four years is what it has taken this very successful producer of well-known reality competition shows: “Survivor”, “The Apprentice”, “The Voice” just to name a few who has single-handedly re-invented television by introducing this new genre starting with “Survivor” at a time where the typical reality show was MTV’s “Real World”. The term “reality TV” which Burnett states is not one he made-up, but a term that was created by a journalist. Four years labor, it can be imagined, that was a passions project for Burnett that was interjected into reality show producing breaks in between shoot schedules.

“Reality” Burnett stated, “I don’t know what that means. Isn’t this conversation right now reality? “Survivor” is not reality. People are not actually marooned on an island. We [Burnett productions] are creating the experience.” He also said, “Extreme Makeover: Home Edition (not a Burnett production) is part of the format of the show. The drama is real. But, it’s not reality. Actually, being marooned on an island would be reality.” 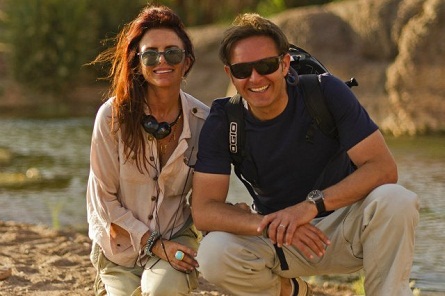 Pictured: Husband and wife team Roma Downey and Mark Burnett on location in Morocco for “The Bible” television series.

Burnett does credit his experiences in producing reality television to what he’s produced today in The Bible series. He said, “If it hadn’t been for Survivor, The Apprentice, Shark Tank and Smarter than a Fifth Grader, we wouldn’t have had the experience to make this.”

Concentrating on the drama:
The strongest appeal to “The Bible” Burnett stated that he wants audiences to get is the emotion of the stories that are being told. He said in the story of Abraham and Sarah, “you can feel what it felt like through Sarah’s eyes to finally have had a child, her only son and to have Abraham offer him up as a sacrifice at the request of God. Burnett stated that the scene purposely spent more time on the expression of Abraham and son Isacc to create this build-up of drama and emotion.

Not your ordinary Bible television interpretation. Burnett said he concentrated on the drama, and that 40 religious advisory experts from all denominations were sought in the making of this History channel series. He stated that “Judaism, Christianity, and all various denominations are in there just so we could get it right.” He said, “It’s a drama. five hours of the old testament, and five hours of the new testament…It’s a full-on drama.” He also said, that it’s not preaching to the audience. “It’s letting you feel the story and not telling you how you’re suppose to think or feel about a particular Bible story,” stated Burnett.

They looked at numerous scripts. Burnett said his production company was lucky to have gotten the ten hours for “The Bible” series to air on the History channel. He said, they had to do less stories but allow them to emotionally connect. He found the moment “where we reach the old testament to the new testament. We realized that was Daniel in the Lion’s Den. The one thing he said that they actually ran out of time and money was for Joseph’s story. What they did was they novelized the scripts from the series. In that book is Joseph’s story.”

Mark Burnett’s favorite The Bible scene:
“The Bible” series opens in episode one with Noah in his arc with his family and animals cascading across the sea. During this scene, Noah is telling the story of the creation of the world and how when evil was discovered via Adam and Eve, that world is being destroyed. Burnett refers to is as an “epic scene.” The rest of the series is narrated. His favorite scene is, he stated is in the new testament when Jesus called-out Matthew the tax collector. The Romans were collecting taxes. The traitors were collecting taxes from their own people.

By watching “The Bible” series, Burnett expects that people will feel a deepening of the Bible. His and Roma’s goal is to make aware of these stories to a new generation of youth who grew-up in public schools not being exposed to these stories. Burnett said, “growing up, The Bible was part of the public school. But we’ve met many many people that don’t know any Bible stories. The book is the foundation of our society and has created more stories.” 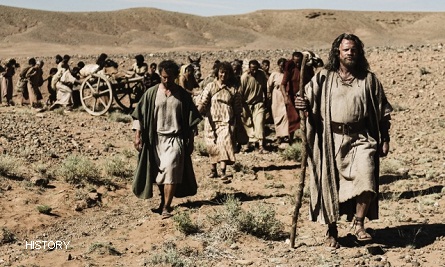 Pictured: A scene from “The Bible”.

Casting the actors:
In casting “The Bible,” Burnett said he used not overly famous actors because “these actors allow you to experience the characters. The most important was Jesus. He’s a big guy who allows you to experience the lion and the lamb.” When searching for Mary, he said that they couldn’t find an actress who looked like the actress that played the young Mary. He decided to cast Roma in that role. Burnett stated of all of the actors that “we did go out and find fine, fine actors. Adrian Schiller who is one of many famous British theater actors in “The Bible” plays Caiaphas. A “Game of Thrones” actors plays Sampson.

Viewers can also expect to see plenty of CGI effects. He worked with the same CGI team from “Gladiator” film and “Clash of the Titans.” Burnett said for scenes that used hundreds of extras, with the help of CGI effects, turned into thousands.

“Tried to give it epic scale” – Mark Burnett
All and all, Burnett said of “The Bible”, “We just tried to give it epic scale and I think we’ve done that.” He also said that they were allowed to accurately tell the Bible story. Leading the Hollywood pack, as always, with projects like “Noah” from other competitors on the horizon, and Steven Spielberg’s “Moses”, Burnett said of The Bible, “It’s a love story. God’s love for all of us. It’s about hope and love. It is the most important story in the history of the world….we’ve enjoyed it so much, I think we will make more.”

“The Bible” show airs weekly on the History channel with the finale episode that will air on Easter.