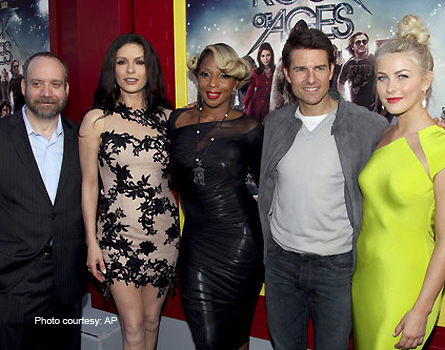 The rock stars were out with the Hollywood stars in Los Angeles for Warner Bros. upcoming film dedicated to the magical time of hair bands and spandex in the 1980s, the “Rock of Ages”.

Video courtesy of Warner Bros. Interviews conducted by Mark Istook and Riki Rachtman. Director Adam Shankman described the movie, “It’s not a documentary. It’s a musical.” Actress Julianne Hough said about working on the set, “I love how you get to perfect everything,” and explained that the movie is “about being a dreamer, following your heart and being true to who you are.”

Playing a fictitious mega rock star god, “Stacee Jaxx” in the film is Tom Cruise who said of his inspiration, “There’s that style of the 80s. I was hoping to embody my own rock god. There was no specific person. It was definitely inspired by all of them”

“I had six days to get my part nailed in this for ‘Hit Me with Your Best Shot’ with Russell Brand. I had as much fun as an audience member as i did making it” said Catherine Zeta-Jones

Playing the role of reporter Constance Sack, actress Malin Akerman stated that her best memory from the 80s was the clothes and seeing her mom in “the high spandex pants, the big hair, and red nails. Those were great outfits.”

1980’s super-successful rock band “Poison” front-man Bret Michaels said of the movie, “it was fun, it was killer it was great. To hear Catherine Zeta-Jones, Tom Cruise, and Julianne Hough singing ‘Every Rose Has It’s Thorn”, that’s a wild day.”

PLUS use our Fandango link to watch Rock of Ages at any Regal Theater before June 29, 2012 and receive a FREE download of the HIT SINGLE “I Wanna Rock” by Diego Boneta from the Rock of Ages Soundtrack (the complete soundtrack is available at our Amazon link here).

BONUS download the original HIT SINGLE “Rock of Ages” by Def Leppard for FREE until Sunday June 17, 2012 from the Google Play Store.