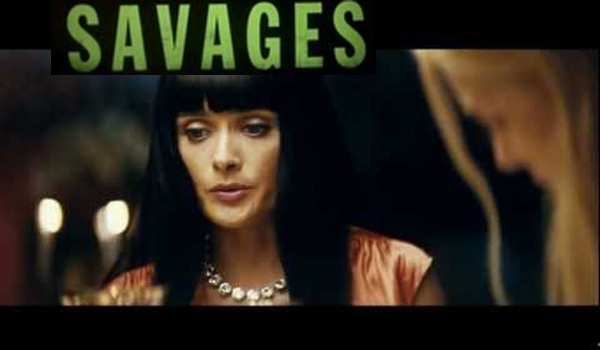 Plot Summary:
The film is based on Don Winslow’s best-selling crime novel that was named one of The New York Times’ Top 10 Books of 2010. Laguna Beach entrepreneurs Ben (Johnson), a peaceful and charitable marijuana producer, and his closest friend Chon (Kitsch), a former Navy SEAL and ex-mercenary, run a lucrative, homegrown industry—raising some of the best weed ever developed. They also share a one-of-a-kind love with the extraordinary beauty Ophelia (Lively). Life is idyllic in their Southern California town…until the Mexican Baja Cartel decides to move in and demands that the trio partners with them. When the merciless head of the BC, Elena (Hayek), and her brutal enforcer, Lado (Del Toro), underestimate the unbreakable bond among these three friends, Ben and Chon—with the reluctant, slippery assistance of a dirty DEA agent (Travolta)—wage a seemingly unwinnable war against the cartel. And so begins a series of increasingly vicious ploys and maneuvers in a high stakes, savage battle of wills.

Blake Lively said of working with co-star Salma Hayek, “I had such a challenging role in this film. And a lot of it didn’t make sense or that I didn’t yet understand about the character so to have someone like Salma to sit down with for hours and sit and work with these scenes with Oliver and without Oliver, and re-write. To watch this woman (Salma Hayek) personally and see how strong she is and how much passion she brings to it and she makes everything make sense. To have such a testosterone charged set and to have this woman who is stronger than all of the men put together it was really empowering.”

Salma Hayek reciprocated the compliment by stating how impressed she was with the acting skills of the young Blake Lively. Hayek said that in general, she finds it interesting to watch talent and that it’s rare to find instincts and natural talent combined with professionalism and discipline.
“Lively has both instinct, talent and intelligence and the professionalism and the discipline that it’s rare to see and it was fascinating, ” said Hayek.

How the two actresses describe “Savages”? “Sexy and dangerous” they agreed. “It’s a violent male movie but there’s also something Shakespearean about it which is rare for Oliver,” explained Lively about the movie’s style.

Hayek observed that what director Oliver Stone brings to the movie is him re-inventing his style. “It’s new, young and refreshing. It could have been done by a “new genius” said Hayek. “There’s beauty in how he interprets technology and who we are today and violence,” she said of Stone.

Who are the savages? Lively said that the Savages is everyone in the movie, but also the audience gets drawn into the story and are able to relate to the characters and the incidents in the movie that will make them savages also. “That’s what’s neat is that the audience becomes one of the savages” said Lively.