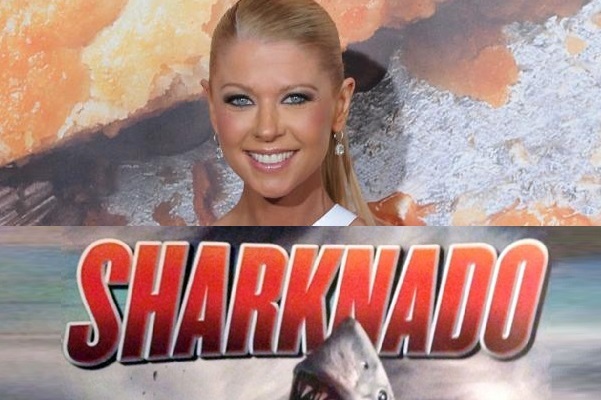 Sharknado 2 is coming:
Syfy announced that it has plans for the production for a sequel to the sleeper hit “Sharknado”. Sharknado 2 (working title) produced again by The Asylum, is scheduled to premiere on Syfy in 2014. The flying sharks have moved from Los Angeles, and this time will be attacking New York City.

Name it on Twitter contest!
Syfy has opened-up a contest on Twitter to name the follow-up movie to “Sharknado”. Fans can tweet their subtitle to @SyfyMovies using #Sharknado. Syfy will select the best submission as the subtitle for Sharknado 2.

Executive Vice President, Programming and Original Movies for Syfy, Thomas Vitale, said that part 2 may even possibly be a prequel. “What we can guarantee is that Sharknado 2 will be lots of fun. We’ll be announcing more details very soon,” Vitale said. 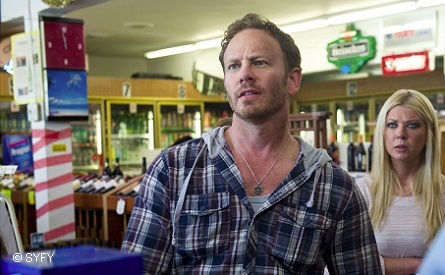 Sharks are flying in Beverly Hills:
In a recent interview with “Sharknado star Tara Reid and director Anthony Ferrante talked about the making of the movie and the goriest scene. Reid said her character is in her house and her ex-husband played by Ian Zeiring, comes in and says ‘Look, there’s going to be a mad storm and there are sharks everywhere’, and she thinks he’s out of his mind. She’s like yes, okay, like sharks are flying in Beverly Hills. Are you joking me? And you know, before you know it – boom, there’s a shark through the pool that jumps through and then there are sharks coming everywhere.”

It was so ridiculous:
Reid said when she read the script, she actually thought the concept “was so ridiculous that it was almost so bad that it was good.” She said, “I mean, sharks flying in the sky. I mean, come on, this whole thing is so unrealistic.”

Ferrante describes how the sharks formed into a tornado. He said, “There is a trajectory. We set up the scene in Mexico. A group of sharks get sucked into a tornado. They get deposited onto our coast and then it slowly progresses where it starts to flood. The sharks start coming up from the sewage lines, and then through the storm. Then it builds to the full on Sharknado.”

Low budget was equivalent to Karft Service on bigger film:
Following along the same footsteps as other sleeper cult classic low budget hits, (Night of the Living Dead, Paranormal Activity, The Blair Witch Project) Sharknado was produced for The Asylum and Syfy for what Ferrante said is “probably the equivalent of the Kraft service budget on Dark Knight which probably is the Kraft service for two days or something. It was nuts.” 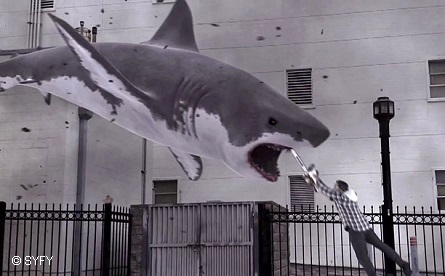 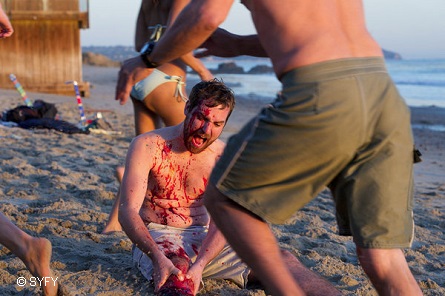 Pictured: A “Sharknado” attack on the beach. – SHARKNADO, Syfy

“There’s a big gory scene kind of towards the end with one of the characters getting her arms ripped off and it’s just a blood fest. We did something clever with the Hollywood sign and, we did the thing at the end, which even though it’s not a kill it’s pretty graphic with Ian Zeiring and a shark. We tried to be creative in how we engineered some of the shark attack,” said Ferrante.

It’s just crazy…it’s silly:
Reid said, “Sharks flying in the sky in Beverly Hills it’s just crazy. I mean, it’s a comedy because it’s so crazy. It is silly and there’s only a certain amount of barrier you could go into. You can’t take it so serious when it’s absolutely the sharks flying in the sky. It’s so out there that it’s actually really funny…you’re going to watch and have a good time and laugh.”

The stars have not yet been confirmed to return for Sharknado 2.