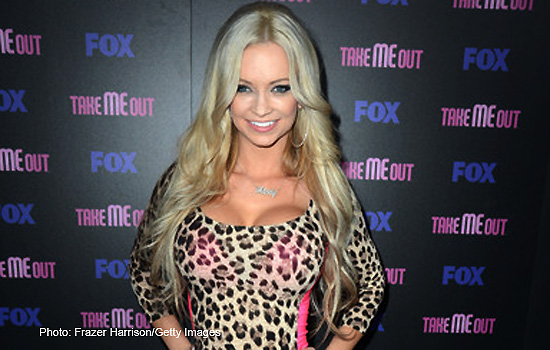 Americanized version of ITV’s UK dating game show “Take Me Out” on FOX with host George Lopez welcomes 30 beautiful young women each week who take their pick of a variety of potential male dates arriving onto the stage via an elevator! 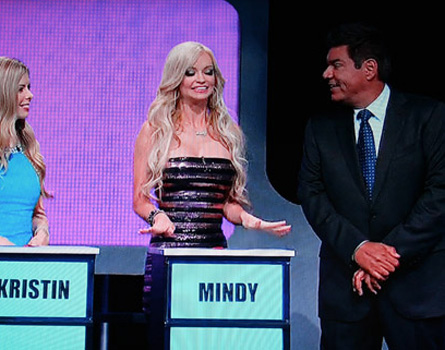 One of these lovely ladies has stayed on the show week-after-week, admitting that she is “picky” is blonde bombshell Mindy Robinson who took the time out to talk to HOLLYWOOD JUNKET about her experience on “Take Me Out”. Mindy had managed to pass on all the men until the most recent episode where viewers and fans finally saw her go out on a date and to the

Robinson has lived in Los Angeles for one year from New England. In her first year, she has already built-up quite a showbiz track record – appearing in fifteen to sixteen movies, twelve television shows five music videos and multiple projects in between.

Getting the job!
Among those projects, Robinson has also done five dating shows, “Take Me Out” included. But getting that job was something that took her by surprise. “I didn’t know that I was going to be on the show until the very last minute. I had no idea until I did a run-through on Sunday. On Monday they said go to wardrobe. Sometime between getting to wardrobe, they said – ‘Oh, you’re going to be eight O’clock tomorrow. Pack all your stuff that you’ll need for two weeks.’ Okay. So I had to get my hair done, I had half of the day to get all my clothes, nails done and get prepared for it. You could stay as long as two weeks. I was excited. I knew it was going to be a prime time show. I know that the British version was huge. A lot of the girls are well-known because they’re back every week.”

Dating in L.A.
A small nerve was struck with Robinson when asked what it’s like to date in Los Angeles versus her hometown. She explained, “The guys out here are nicer but there’s a fakeness to it. Where I’m from it’s okay to be honest and say horrible things to someone. If you don’t like them you don’t like them. But if you say you’re going to show-up, you show-up. I get stood-up a lot out here. Guys get “busy’. They’re so busy they can’t send a text message.”

If a guy thinks that they can swoon Robinson with a lot of money, a fancy car, and a successful career, then they’d be wrong! Robinson said, “A lot of guys talk about money and cars. It doesn’t mean anything. I don’t really care, they’re just things. You don’t take them with you when you die.”

What viewers of Mindy’s last episode saw what that she finally got picked-up off her feet by a wonderful gentlemen on “Take Me Out”. She said of past male daters on the show, “The guys haven’t been that great. I’m not going to date the guy that hunts animals or the stripper guy with a foil thong.”

There’s only two more episodes left of “Take Me Out” which airs Thursdays 8/7 c on FOX.