Voiced Like No Other! WALKING WITH DINOSAURS 3D Sneak-Peek! 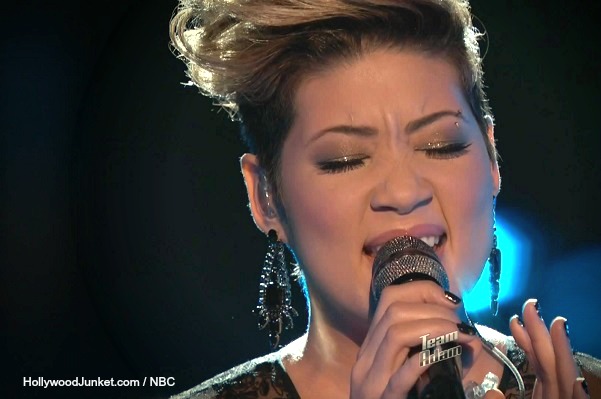 Team Adam dominates the The Voice Top Five. With three horses in the race (Tessanne Chin, James Wolpert, Will Champlin), this gives Adam about an eighty percent chance of winning this season. Team Christina is left with one contestant, Jacquie Lee; Team Blake has one singer with Cole Vosbury (whom Blake rests his confidence in as winning); and Team CeeLo is out of the race with zero artists left this season.

The top five Jacquie Lee, Cole Vosbury, Tessanne Chin, Will Champlin, and James Wolpert opened the show with a song “The Best Day of My Life” by American Authors.

America saved James Wolpert last week via Twitter in the five minute Instant Save. Adam said the song he is singing this week, “With or Without You” by U2, will give James a chance to do a rock and roll song that has that bravado. “I’d like to see what he does,” said Adam.

After James’ performance, coach Adam told James, “I don’t care about the competition, I just know how incredible that performance was. That was even beyond what I thought you could do. I’m so proud.”

Christina was a little annoyed, “I love that song. I suggested that for a group performance. I’m glad you got to sing it anyway.”
Blake was as impressed as Adam, and maybe a little bit threatened too, “I love that song. You being the save last week, you needed a moment like that . You might have dug yourself out of a hole. That was really strong.”

Watch James Wolpert Sing “With Or Without You” HERE

“His biggest challenge is not physical, it’s mental,” said Adam. Will sang “Carry On”.

Adam said, I don’t think I’ve ever seen this happen before. Look at this smile. If Will is smiling, he definitely did well. That delights me because he had fun up there. I’m gushing..I’m really proud of you.”

CeeLo said, “It is really cool to see you all swaggy up there. I love that open-mindedness. Great performance tonight.”

Blake said, “Gosh dang I was wrapped-up. I think opening your heart up is going to go far because we enjoyed that.”

“I want you to be that voice that allows everyone to escape for a moment” said Christina to Jacquie Lee. Christina got to show Jacquie the difference between a recording session and a live performance. Jacquie said it made her feel really good.

Coach Christina said, “You did things that I didn’t even know you were going to do tonight. Wow! You blew me away. I wanted you to do that song because it’s such a special song. It’s a song of specialness, and to do it in a sincere way. You showed a lot of dynamic. You showed the most dynamic and best vocal performance that you’ve ever shown. You straight-up won tonight. You showed the most power by knowing when to pull back. That’s like a Christmas song. I want to push replay”

CeeLo “You were amazing. It was amazing. I don’t have anyone to support and encourage. We belong to each other. That’s how I have to feel about that performance tonight.’

Blake brought CeeLo in to talk to Cole. Blake said, “I wanted Cole to know that he still has CeeLo’s support.” CeeLo said every time they call his name, he thinks Cole is “going to win this thing.”

Cole sang “Shameless” by Garth Brooks while sporting a new suit. Coach Blake was thrilled and said, “Incredible job dude. I’ve been thinking about this.” Blake said he remembered Cole telling him he wanted his help in finding out who he was as an artist. There was a moment when you looked at me and said remember when Garth Brooks sang Shameless and we should do something like that. Mission accomplished. Lets win this thing.”

CeeLo said “What you do is very special because every song that’s been picked for you to perform has been your own. When I met you it was the opposite and I’m glad that my buddy Blake was able to see it through all the way.”

Ending the night was a stellar performance by Tessanne. She said her biggest challenge is “For me it’s how do I channel what I’m feeling to what I deliver. Tessanne said she can see the finish line and sees herself winning The Voice. She sang “Like a Bridge Over Troubled Water.”

The audience roared at the end of Tessanne’s amazing performance. Coach Adam said, “I don’t even know what to say. That is crazy. The things that they edited out of the package, is emotional. The shear talent…I’ve never been speechless before. Regardless of popular opinion. That’s probably that most flawless and graceful performance I’ve ever heard on the show.”

Blake said, “It’s hard to argue with anything that Adam just said. I like you and you’re an incredible singer too.” 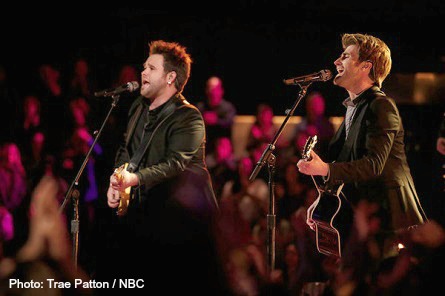 Pictured: The Swon Brothers perform on THE VOICE

At the beginning of Thursday night’s show, host Carson Daly said the Top 5 artists hit Number one on the Pop Chart, the Alternative Chart, the Country Chart and iTunes. Former The Voice Team Blake contestants The Swon Brothers, who are currently signed with Sony Records, opened the show with a performance of their original song “Later On”. Thursday night, they said, was the first time that they had seen their former coach Blake since their exit on the show last season.

Adam said about his team, “It feels like a victory because they are here. They have made a lot of fans. Proud that we have banned together and made it this far.”

CeeLo said about the contestants this season that they’ve have had “ample opportunity to be compassionate…Someone should lose gracefully and someone should win graciously.” Carson Daly replied by calling it another “CeeLoisms”, and said they should be turned into a book.

Christina said “Jacquie is so unbelievable. I can relate to the person she is for being so young. She is the fighter that she is. Seeing a true star blossom before our eyes. She has such a voice beyond her years, and a presence and a heart well beyond her years that I find respectful.”

Blake said “The only reason why Adam has three people left in this competition is because I let him!” He said he’s confident that Cole Vosbury is going to win the competition, and said, “My job on this show is to win this thing. I’m confident and I love him.”

Adam sarcastically responded to Blake’s fake sentiment with, “I want to thank you for letting my team progress.” Adam addressed Blake’s statement of hinting (just in case it happens) that he is allowing Adam to win this season.

The Top 5 stood on stage to hear the first announcement of the first artist leaving The Voice. Daly called out James Wolpert‘s name from Team Adam. James said he had the time of his life and coach Adam said he was so proud of him. 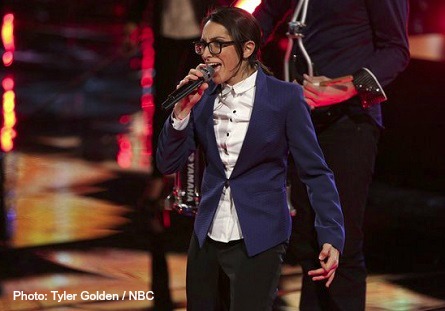 Michelle Chamuel sang her new single on The Voice stage and said it’s available on iTunes and on her website. She announced her new album is coming out in 2014.

The four remaining artists were brought onto the stage. Jacquie Lee answered a fan question on how she’s transformed by being on The Voice. She said she’s gained so much more confidence by being on the voice and learning what kind of artist she is and being a better person. Daly announced that Tessanne Chin is moving on to the finals. Tessanne was overcome with sadness at first, thinking she was eliminated! Not the case. Then she rejoiced once she heard Daly exclaim that she’s part of the Final Three. 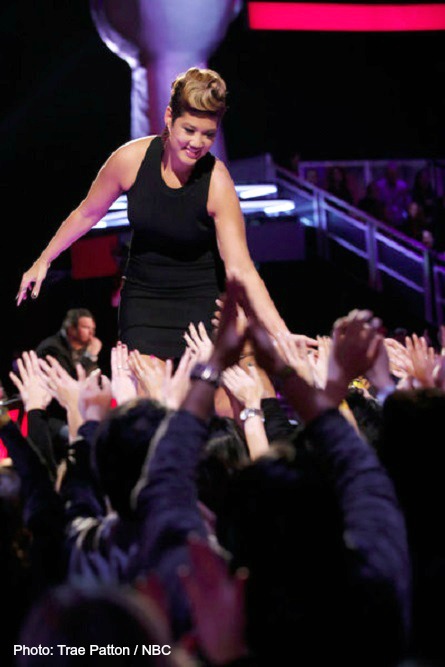 A fan question asked Adam Levine if he was tearing-up during Tessanne’s performance last night. Adam admitted that he was close to tearing-up, but did not. Blake got the question of what he wanted for Christmas. He said he wanted beer and family and didn’t know why the fan said she was in love with the show and not with him. Blake had another fan question of why he never wears a cowboy hat. Blake answered, “My ego has grown to such size that I can’t fit any more” a cowboy hat. 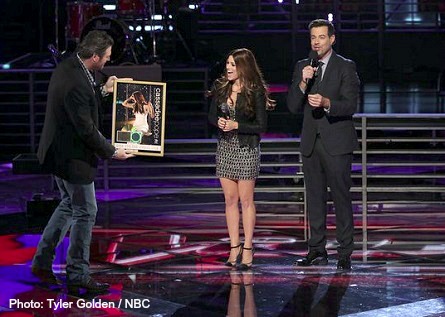 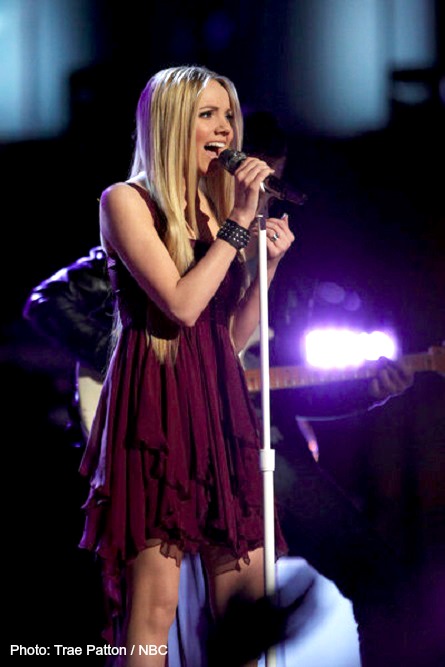 Danielle Bradbury performed her single “Never Like This” from her debut album. Daly said her country album debuted number one on the Country charts. Blake said, “I put Danielle Bradbury at the top of the heap. She’s as good of a singer we’ve had.” She said she’s touring with Brad Paisley right now.

Will Champlin said he succeeded in Monday’s performance with connecting with people. The second finalist announced was Jacquie Lee from Team Christina. 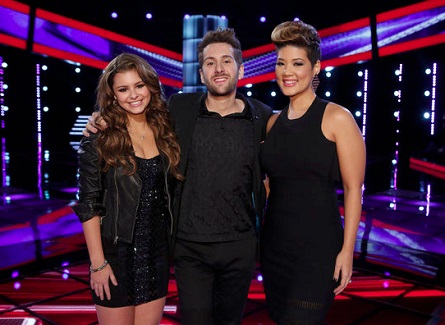 It was down to Cole Vosbury and Will Champlin. Cole said to his coach, Blake, “I never imagined that I’d have so much support from you. I don’t want to let you down in the finale.” Will said that he’s learned so much from Adam and he won’t let him down. He said “it’s been an incredible journey to work with you.” Daly announced that Will Champlin would be the last contestant to round-out the final three! Blake looked teary-eyed. With Cole’s elimination, three-time Voice champ Blake Shelton is officially out of the race to win this season.