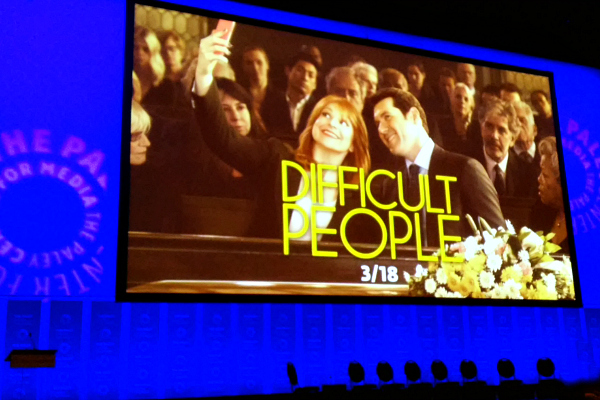 The moderator stated about the show and its characters, “they are one of those venomous comedies. They are clawing at each other each episode.” The show is a kind of “snap-shot of New York.”

The “Difficult People” second season sizzle reel then played where audiences got a preview of these characters in their natural habitat. That included a scenario with Nathan Lane attempting a toilet bowl challenge; a new transgender character – Lola is introduced; Billy and Julie are seen in a screaming match against an intern; Tina Fey guest stars in a scene with Andrea Martin; Billy in a steamy shower scene; and “The Shining”, and “Birdman” parodies. 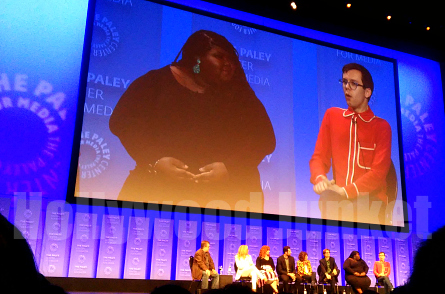 Pictured (on screen): Gaby and Cole with cast.

The talented and diverse cast then came out onto the stage. The cast is made up of Cole Escola (portrays the cafe co-worker), Gabourey “Gaby” Sidibe (portrays the aggressive cafe boss), James Urbaniak (portrays the ambitious husband), Andrea Martin (portrays mother of Julie), Billy Eichner (gay BF of Julie), and of course, Julie Klausner (Julie Kessler). Also joining them was producer and show-runner Scott King.

How It All Began:

Julie said she wrote the script for “Difficult People” and told everyone that it was like “Curb Your Enthusiasm.” She went to her friend Billy, who plays her best friend on the show. Amy Poehler liked it and helped make it a show. Poehler is that show’s executive producer. Julie then went on to write eight scripts in ten weeks (the audience gasped). That’s unheard of. She also brought another friend, Scott King, on as a show-runner.

He’s Not a Small Dog in a Purse:

They said the second season “is great. We get to work off of what was established in the first season.” Andrea and James roles were written for them. Billy needed a family of his own. Julie said they needed another gay character in the cafe.

“He’s not a small dog in a purse,” Julie said of her gay best friend on the show Billy. Julie explained, “we want to show Billy as a sexual human being.” Billy chimed-in that the show gives the most accurate depiction of a gay in a big city. “We’re not white-washing it,” said Billy.

Julie said she didn’t make a gay character where he’s all about the female lead as audiences see in most television shows. Think “Sex in the City”, “Will & Grace”. There was a laughable annoyance when the cast pointed-out that the show did NOT get nominated for the GLAAD awards. “We have a need for GLAAD. We are well out!” stated Billy. One of his pet-peeves, Billy stated is when casting directors say that they could cast a real gay guy. BUT…wouldn’t it be interesting to have a straight male play gay?

Andrea Martin plays lead character Julie Klausner’s mother “Marilyn Kessler”. Andrea stated that it’s amazing to be part of another generation. “I literally don’t understand anything” she said of the dialogue on the show (followed by laughter). She continued “I don’t know what the fuck I’m saying” (more laughter).

Julie said of her character – her only goal is NOT to be her mother as she’s turning into her mother. Julie also described Andrea playing her mother, “nobody does sweetly awful. She has this elegance and tries to put on that veneer.”

Gaby, who plays the cafe boss, stated that her character is based on “that really horrible boss I used to have. She was the worst person I ever met,” Gaby said of her boss from a tutoring kids job.

Julie explained the repetitive situations of the characters on “Difficult People” (seemingly similar to that of the “Seinfeld” characters) as “whatever we don’t want to mess-up for ourselves, the world will because the world is garbage.” It’s a self-defeating complex.

As for her best friend Billy – he’s Julie’s “soul mate” on the show she said. She also said “Difficult People” is the flip version of a typical sitcom relationship. “I get to be the funny jerk. Arthur (James Urbaniak) is the scapegoat for Marilyn. He’s my liberator. But, I’m still captive.” The moderator observed “you guys are a voltron of snarkiness.”

In an episode, Billy and Julie decide to hire an intern. During the interview, they start yelling at her and screaming out their expectations/job requirements to her. Billy said “it’s funny being mean to her. But, why are we being mean?” He said it’s because the characters have taken 15 years of bitterness and “we are finally not the intern.” 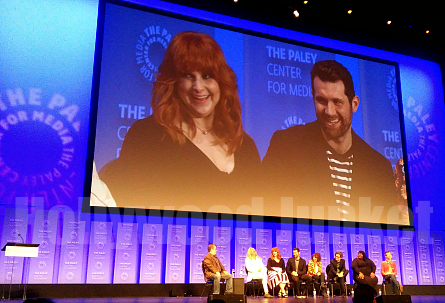 Pictured (on screen): Julie and Billy with cast.

With so many character flaws and meanness going around on “Difficult People”, how can audiences enjoy what they’re watching? Andrea said “every single person (on the show) has great vulnerability. I think that’s how you can watch it and not be repulsed.”

Andrea also said her character “Marilyn” tries desperately to have a gay best friend because “I’m competitive with my daughter.” She also ensures “for all you fans out there, the bitterness remains.”

This season will also have Billy dating an “America’s Next Top Model”. He said “it’s very realistic!” Also, a new character, Lola will be introduced as a transgender waitress. There’s a funny scene with her and Billy where Billy can not NOT say one un-offensive thing to her! He said “you can’t say anything because she’s trans. She’s just as mean as we are.”

Also, there’s a scene with Andrea Martin and Tina Fey. Julie said Tina “nerded-out” because she was working with Andrea.

In season two Julie said, “we try to challenge ourselves and come up with things that make us laugh. It has to be really good.” Billy finished with “the show’s not for everyone. Go watch ‘Mozart in the Jungle’.”

“Difficult People” can be seen on Hulu which ordered 10 episodes for the second season premiering Tuesday, July 12th.