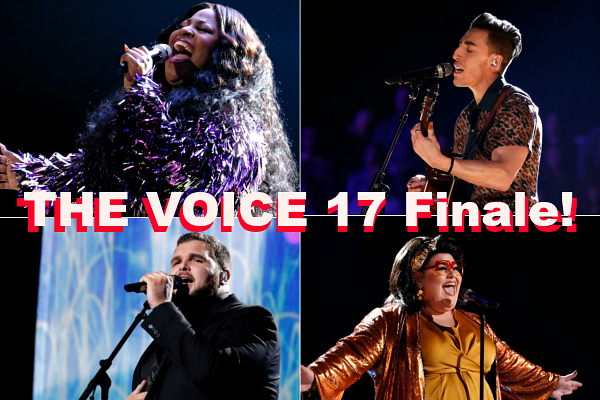 “The Voice” season 17 Top 4 sang one original song, one holiday song with their coaches, and a bonus song. The artist with the most streams after Monday’s show from their original songs and their other performance will be totaled to help determine the winner for Tuesdays Finale show.

‘Voice host Carson Daly announced that coaches Blake Shelton and Gwen Stefani had a number one song on the iTunes charts, “Nobody But You.” Blake said it’s unbelievable that people are going on iTunes, finding that song and buying it. Team Blake was up first on Monday night’s line-up of the Top 4 artists’ performances.

Blake said the two people that he gets asked about the most are -Ricky Duran and former original coach Cee Lo Green. When Ricky performed “Let it Be,” it was #2 on the top 100 of iTunes.  “The thing that got Ricky here could take him to victory circle” said Blake.  Ricky sang “Running Down a Dream” by Tom Petty and the Heart-breakers.   Ricky said it’s more that just chance. “I’m destined to be here.”

Kelly said this is her favorite finale because everyone is represented here, with their own lane.  John agreed and said it’s cool to hear classic rock on the show.  “It feels very vital and vibrant” Legend said when Ricky sings it.  Coach Blake said Ricky never let any of them down.  Every time he gets on stage, he comes through.  “He gets the job done every time.”

Jake sang his original song “Better Off Without You” about his divorce.  Kelly liked that it sounds contemporary, yet paying homage to Country.  It’s the first that people get to see him as an artist.
Gwen said it was exciting to hear an original song and to get to know him more. The power is in his voice and she said he’s grown in that he “owns it” more now.  Kelly said he’s just “really super humble” and always puts himself on the back-burner.  She said that hurdle was put there for him to get through but also for other people to be inspired by it.  She said Jake is an incredible writer.

Rose sang her fist single ever called “Steam Roller.”   Gwen told Rose that she can hear her voice on this song and it’s going to blow her away to hear Rose in the studio versus on the stage.  Rose said “this is literally my life” on her original song.  Gwen said “new music is everything.”  Gwen told Rose that she could have never had done something like “The Voice” back in the day and gets to live vicariously through Rose.

Rose’s mom and dad were present in the audience.  Carson compared Rose to watching Mary J. Blige.  Blake said he’s never heard an original song on the show like that.  He continued by stating it embodies everything she’s done on the show to this point and showcases what an incredible singer she is.  Gwen said she could see that Rose was so free, sparkly and happy.  “It was fun to see you do an original.”

John Legend took Katie Kadan to Capital Records in Hollywood, California to record her original song. The writers of the song worked with Kelly Clarkson before as well as former ‘Voice coach Christina Aguilera.   John asked what she’s taken from her journey on “The Voice.”  She answered “more confidence.”

Kelly told Katie that is on her sexy playlist. “That was nicely matched-up.”  John said in the studio he felt that it was the perfect marriage of her star.  “You ARE all better” stated John to Katie.

ROSE SHORT & Gwen Stefani Holiday Duet – They sang “My Gift is You.”

Jake Hoot was a one-chair turn.  Jake sang “Amazed Lonestar.”  Kelly called it “such a finale song.”  His girlfriend came out to attend his finale performance.  Kelly said Jake has a little bit of Clint Black in him as well.   Jake said “The Voice” has definitely started a new chapter in “the Hoot book.”

Gwen said it was so beautiful “such a pretty song” and it’s great to see him so relaxed.  He’s had so much growth.  Kelly said it’s so beautifully classic, and everything she grew-up on in Country. She called his voice “magical.”

Chicago’s best-kept secret is in the finale of “The Voice” in Katie Kadan said Carson Daly.  John said when he turned for Katie in the Blinds, she looked like someone who was supposed to be a star.  Katie sang Aerosmith’s “Don’t Want to Miss a Thing.”

Blake told Katie that people love her so much as the studio audience cheered for her.  He said there’s nothing else to say about how incredible Katie is.  John told her he’s lucky to have gotten to have worked with her and she’s never let them down but “dazzled” them every single time and she should be proud.

Ricky Duran displayed his love of meaningful music.  A representation of the type of artist that he wants to be Ricky said of his girlfriend and the original song he chose called “A Woman Like Her.” Kelly told Ricky that he reminds her of Bruce Springsteen because he sings songs that are relatable and sings with a rasp.  John said that song is really “gorgeous” and predicts that it will be the most streamed tonight. “It’s a magical song.”  Coach Blake told Ricky to wait until that last competitive performance of the entire season to give his best performance of the season and urged the viewers to vote for Ricky.

Daly pointed-out the “unlikely pairing” of Rose and Gwen.  Her “God’s Country” performance on “The Voice” was number 7 in iTunes Top 200.  Rose said she’s fought for everything in her life and she’s leaving it all on the stage in the Finale show.Rose chose to sing “Border Song” by Elton John in an Aretha Franklin rendition.  She said that’s where are roots are and wants to show “where all of that came from.” Rose said working as a corrections officer was an “abusive” job psychologically.  Rose said now she is “truly” her “best self.” Gwen said Rose had to be shut-off as a prison guard and being on “The Voice” has been an awakening for her.  She’s had to be vulnerable.

John said ending with that beautiful message and hearing it sung today and knowing her background in Gospel “was a really beautiful moment.”  He said that was “very special” Gwen said Rose has always known what she’s wanted to sing, do, and say.  Gwen said God put and “extra drop” of cool and talent.  She is “such a magical human being.”

“The Voice” 17 finale opened with a gag featuring coaches Blake Shelton and Gwen Stefani where Blake is exposed as being Gwen’s wardrobe designer.

Shane Q, Will, Alex, and Max opened the show with a performance of “Gimmie Some Lovin” by the Spencer Davis Group.  Little Big Town performed next.   This was followed by a funny gag where coach Kelly Clarkson is shown being a stage mom to her Team members – Jake Hoot, Shane Q, and Hello Sunday.

Black Eyed Peas performed “Ritmo of the Night”  Then, Team Legend’s Katie Kadan performed with Adam Lambert “Do You Believe in Life After Love” by Cher.

ROSE & GWEN  performed after a medley that reminisced about their coach/artist journey on the show.  Then,   Kat Hammock, Gracie, Marybeth, and Cali Wilson took to the stage to perform a Country song.   Dua Lipa performed “Don’t Start Now.”

Next, Ricky Duran and Gary Clark Jr performed a duo that blended their voices extremely well.  “The Voice” season 17 winner Maelyn Jarmon from Team Legend performed Holiday classic “Have Yourself a Merry Little Christmas,” which is available for purchase.  Host Carson Daly asked her about giving Top 4 advice.  Maelyn stated getting to the Top 4 “is a win” and to use the show as a platform.  “You have to vote for yourself,” she said.

After a hilarious skit about Blake Shelton having head trauma to tell the truth to his ‘Voice co-workers, Hello Sunday, Joana Martinez and Myracle returned to sing “Set Me Free” song. Next, Country super-star artist Luke Combs performed his seventh consecutive hit “Even Though I’m Leaving.”

Katie called John Legend “a brilliant man” and thanked him. She was tearful while telling John that him believing in her has made her gain confidence. Rose told her coach, Gwen Stefani, that she made her a better person and “it’s been a hell of a ride.” Then, Jake thanked Kelly for giving him the opportunity and he’s grown. Jake gave the ultimate compliment when he told Kelly that her love for family has made him a better parent. Kelly got choked-up. Daly announced the artist in fourth place which was Rose Short (Team Gwen). The finalist in third place was Katie Kadan.

The final two were Ricky Duran and Jake Hoot. Blake told them that he hoped that they have taken-in the experience, lived in the moment. “Artists with huge hits and record deals don’t get this opportunity,” stated Blake. He added that they have both earned their spot. “I couldn’t be happier for you.” Kelly told Jake that this has been the most talented group of singers. She told Jake to “just take it in” and reminded Jake that he was a one-chair-turn which is so amazing. “Thank you Blake Shelton for not turning around” Kelly told Blake. Jake Hoot was revealed as “The Voice” season 17 winner!