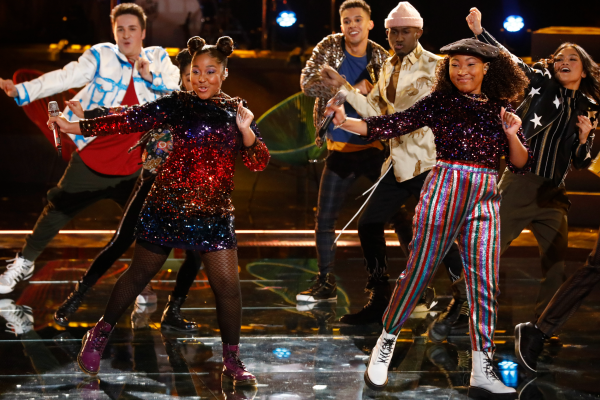 “The Voice” season 17 Top 8 artists performed twice on Monday’s episode. The artists sang solos, then were paired together for special duets for 1980s ballads. On Tuesday’s Results show, only four artists out of the eight will be left to compete in next week’s finale.

Last week on iTunes charts, Katie Kadan was number 8.  John suggested that they do one more “bad ass” song and if they make it to finale, to do a ballad.  John chose “Lady Marmalade.”  Katie said she’s been teaching music since age 19.  She said she’s learned more on “The Voice” than she’s learned in eight years of singing.

After her Top 8 performance, Carson Daly said Katie just won a Tony, a Grammy. Kelly said it’s awesome that Katie’s on the show.  Gwen called it her favorite Katie performance so far, and she was watching Katie instead of listening to her.  Coach John Legend said every week is a perfect week for Katie because every song she sings she makes it sound like her song.  He said they’re lucky to have her on the show and they don’t deserve her.  He agreed with Carson in that Katie deserves all the awards.

Kat got the song “Somewhere Only We Know” by Keane.  Blake said you can see how talented Kat really is when she goes from head voice to chest voice.  Kat said her sister reminisced about how last year Kat was filling-up her cup and she went to get a Christmas tree.  This year Kat is on “The Voice” and she’s getting her Christmas tree.

Kelly reacted “beautifully done.”  Kelly added what Kat has is really special, a voice “that really touches us” and she’s happy Kat is on the show.  Gwen told Kat that she needs to understand how gifted she is and she needs to make records.  “You’re going to have a full-on career after this.” Blake called it Kat’s most powerful vocal performance.  Adding that Kat’s voice can make you happy or break your heart at the same time.  Blake promised to help her make a record after “The Voice.”

They performed fun 80’s classic song “Your Love”.  The two got a standing ovation from the coaches.

America saved Marybeth Byrd last week in the Instant Save vote.  John said he wondered if she was in the bottom because they strayed from Country last week.  Marybeth seemed to agree.  She said she wants to show that she’s Marybeth Byrd from a small town.  Carrie Underwood sassy song “Before He Cheat.”  John said with Marybeth almost not making it to the Top 8 will light a fire under her that she needs for this song.

Marybeth received a standing ovation from the coaches.  Blake said that’s got to be tough vocally and she did a great job with it.  He said she can do all different genres and make it work.  He said way to represent Arkansas tonight.  John said he didn’t recognize her because she got into the character so well.  It was also great vocally.  John reminded voters that they need her in the finale.

Kelly told Hello Sunday how intriguing it is that they’ve only known each other for two years.   Hello Sunday selected “Don’t You Worry About a Thing” by Stevie Wonder.  Kelly said they showed-up with “the hardest song.”  Myla said if they won “The Voice” they’s know that this is meant to be.

John had to wait for the audience to calm-down from cheering for Hello Sunday. Then he said the fact that they’re a little bit competitive with each other, “it was a fantastic performance.”  Kelly said she’s such a proud Mama.  She agree with Jon that they brought their A-Game, always running faster than the other.

Ricky chose the song  “Let it Be.”  Since his father passed, the song has become his family anthem.  Blake said he’s glad that Ricky is doing something that means that much to him.   Ricky said there was nothing they could do after his father passed  His mom would tell him “let it be.”  Ricky suggested a solo guitar part in the song.  Blake agreed and stated whatever Ricky can to do add an extra layer is a bonus.

The coaches gave him a standing O. Daly stated that everyone is bringing their A-Game.  Blake noted that Ricky just “gave the vocal performance” of his life!

John said this song is a good hybrid.  Will auditioned with a Bruno Mars song and he loves Will singing Bruno Mars.  He selected Bruno Mars song,  “Locked Out of Heaven.”  John said Will is so unique and has the ability to create his own lane.  Will said John has been able to break things down in a way he’s understood.  Will stated that this week his going to pick-out a couple of ladies in the crowd and give them that “smolder” whatever that looks like!

John said Will is so much fun to work with and encouraged voters to bring Will back next week.  Daly mentioned the moment Will had with Blake, and is never sure if Will is going to leave the stage – referencing Will’s high energy in performing.

It was an “80s explosion” when the duo performed “Express Yourself” by Madonna. Katie and Rose said they were excited to perform together, especially that song since they are 80s babies.

Hello Sunday and Kat Hammock performed “We Belong Together.” Myla and Chelsea from Hello Sunday love word combos. They came up with “Hello Hammock,” and “Kat Sunday” for their duo.

Gwen said  Rose can do any kind of vocal acrobatics and people can relate to her.  Rose said she hopes to find the love like her parents.  “The Voice has literally changed my life” stated Rose.  Gwen admitted that this song is a strategic move, and she’s going to knock it out of the park.

All the coaches were on their feet after her performance.  Gwen called it “unbelievable” and was so “in awe” of Rose.  Gwen cried after that.  Kelly said Rose is “so blessed” and she’s so good.

Kelly knows Jake is a huge Eagles fan.  Jake mentioned that his mom is an Eagles fan as well and “Desperado” is her favorite song.  Kelly said the song sounds like you’re going to see Jake Hoot on tour and this is one of his big hits. Jake said it’s a great feeling to know that someone at that level like Kelly has that much faith in him.

John said every week Jake is so consistently excellent and his voice sounds like home.  Hits high, pitch perfect notes.  Such a joy to listen to.  Coach Kelly told Jake he is an incredibly gifted voice.  She loved the story that really matters to him and he delivered.

“The Voice” season 17 revealed the Top 4 artists chosen through America’s votes from Monday night’s live performances. Every Team remained in “The Voice” competition with one artist each.

The fourth artist rounding-out “The Voice” season 17 Top 4 artists was determined by America’s last Instant Save vote of the season.    Performances on Tuesday’s show included Tones and I, and past ‘Voice season 14 artist Kaleb Lee who performed with his former coach Kelly Clarkson.   Blake Shelton opened the show.

Six-time winning ‘Voice coach Blake Shelton, who has 26 number one hits, opened the show joined by his buddy and Country super-star Trace Adkins to perform their latest collaboration “Hell Right.”

Host Carson Daly asked Ricky Duran about his sisters’ support.  Ricky answered by thanking his sisters for always believing in him.  Marybeth was asked about her sassy side on Monday’s performance and how has she changed.  Marybeth said she’s only grown and learned to always believe in herself.  She gave the Lord all the credit.  Daly announced the first artist Saved  as Katie Kadan (Team Legend).

Next, “Tones and i” sang “Dance Monkey” on “The Voice” stage after the commercial break.

Another revelation that happened on Tuesday’s Results show was that Kelly Clarkson has been studying to learn Spanish during her ‘Voice down-time in between taping breaks.   Daly brought out a coach from the Spanish version of “The Voice”, called “La Voz.”  Coach Luis Fonsi, who won season one of “La Voz” and is returning to season 2 as a coach. He encouraged Kelly’s Spanish, and promoted “La Voz.”

The remaining artists were brought out onto the stage.   Daly asked Kat Hammock about how the time on “The Voice” has affected how she believes in herself.  Kat said it was because of Blake’s mentoring.  The next artist that advanced to the finale was Jake Hoot (Team Kelly).

Daly asked Hello Sunday about working with Kelly.  They said she’s helped them to built their confidence and with song choices.  They also learned that as long as they give 150%, they should never go home with their heads down.  Daly announced Ricky Duran (Team Blake) as the next Saved artist, and finalist.

Will said it’s not a secret that he’s looked-up to his coach John Legend for nearly a decade and to be working with him on “The Voice” means the world to him.  Rose said the most important thing she’s learned about herself by being on “The Voice” is to “not be critical”about the gift she’s been given because her gift came from the Heavenly Father.

Daly revealed the three artists who would be performing for the Instant Save Vote.   They were: Hello Sunday (Team Kelly), Kat Hammock (Team Blake), and Rose Short (Team Gwen).  That meant that Will Breman and Marybeth Byrd were the eliminated artists.

Hello Sunday (Team Kelly) sang “Chandelier” by Sia for their Instant Save song.  Kelly reacted to their performance that they’re 14 years old tackling big songs by Sia and Celine Dion and they’re “amazing.”  Kat Hammock (Team Blake) sang “You’ve Got a Friend”.  Blake encouraged Kat that she has a record to make no matter what happens with the Instant Save vote.  Rose Short (Team Gwen) sang “(You Make Me Feel Like) a Natural Woman” song by Aretha Franklin.  Gwen was in tears after Rose’s performance.  She said “that was ridiculous” and there’s no question that Rose is the “most talented human being.”

Carson Daly brought the three artists back out onto the stage to start the Instant Save vote.  After the break, the voting poll revealed Kat Hammock with 27% votes, Hello Sunday with 23% votes, and Rose Short pulling-in 51% of the votes.

The artists got potential final words to their coaches.  Hello Sunday told Kelly that they love her “so much” and thanked her for being the “mama bear” and for pushing them.  Kat told Blake that he’s been her hero and the biggest blessing of her life to be working with him.  Rose told Gwen that she’s given her so much confidence and in the words of Blake Shelton “hell right” because she’s not tripping.

Kelly responded by telling America to please vote Hello Sunday through.  She stressed their young age of 14 years old again.  Blake told Kat that he doesn’t have any last words, he’ll just continue the conversation that she’s one of the most creative, inventive and imaginative vocalists he’s worked with, and if she doesn’t make it through, he’ll talk to her in a couple of days.  Gwen told Rose that she keeps blowing her mind because she’s perfect and was walking around as a corrections officer.  But, has this “crazy gift.”

The Instant Save Vote went to Team Gwen’s Rose Short who will be going to “The Voice” finale and the fourth member of the Top 4!  It’s the first time in “The Voice” history that each coach will have an artist in the finale show.

“The Voice” finale airs Monday and Tuesday, December 16th and 17th at 8 pm PT on NBC.