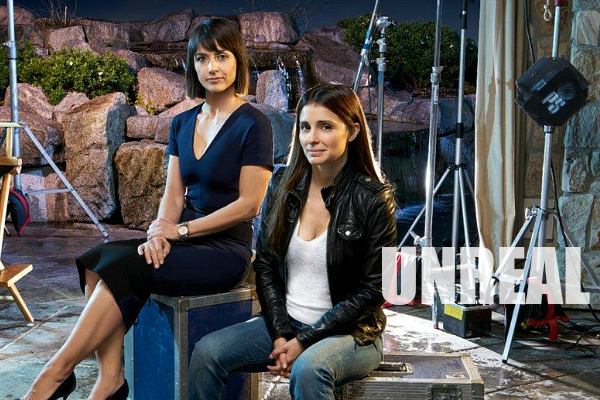 During a recent preview screening, the lead actors from Lifetime’s “Unreal” delighted audiences with a Question & Answer session about the scripted show that depicts a dating reality show much like ABC’s “The Bachelor”.

In upcoming episode 6 titled “Casualty” Shiri Appleby makes her directorial debut, an accomplishment that was years in the making. Appleby, who portrays producer Rachel Goldberg, started acting at age three. She said for her, the more she works on something production wise, the stronger her performance gets.

“Unreal” episode 6 opens with a dis-shoveled Rachel due to a physical assault by Jeremy. The rest of the episode is how Rachel handles it and the outcome of how it’s handled.

There are a few key explosive scenes in this episode that will be much appreciated by fans and reality show addicts everywhere. The process of how the reality drama comes into fruition on this show is close to how it’s done in the daily life of a real reality show producer.

Two particular heightened scenes show how producers initiate conflict by telling a contestant something that they weren’t aware of in order to get a big reaction out of them.

After Darius (the “Unreal” bachelor) chooses a pre-determined home-town date with a contestant, the rest of the women, also competing for Darius’ love on “Everlasting,” show are thrown into a meeting with the show’s psychologist to talk about why they weren’t chosen by talking to a mirror. Of course, this stirs-up conflict amongst the girls who give each other their own opinions of why the other wasn’t chosen. This results in some major drama after a contestant is fed a secret about one of her opponents.

Viewers of this current season of “The Bachelorette” a spin-off of “The Bachelor” will remember when the male suitors where conveniently placed around a pile of gossip magazines where one happen to have on its cover, their bachelorette Jojo Fletcher. The headline read something about Jojo having a boyfriend while she was on “The Bachelor” playing for Ben Higgins. The men were outraged and this served for some TV drama that escalated with Jojo crying her eyes-out and confronting the men by explaining the real situation.

What audiences don’t know is that anyone who has ever been or worked on a reality show, the contestants are typically banned from the outside world during the months that they are competing on the show. That means no personal cell phones, no newspapers, and no, no gossip magazines. It would appear that those magazines where strategically placed by a producer to stir-up some drama, as surely as it was also set-up (by a producer) for villainous contestant Chad Johnson to pop back up at the house after being eliminated this season on “The Bachelorette. An eliminated reality show contestant doesn’t come back on the show unless they’re allowed to by producers.

This is the kind of instigating that we see a lot of in episode 6 of “Unreal”. Newcomer to the show, Ioan Gruffudd (John Booth) who plays Quinn King’s boyfriend, said he is a “die-hard” fan of the show. Unlike his co-stars, he said he didn’t have to audition for the part because he was called and offered the role. 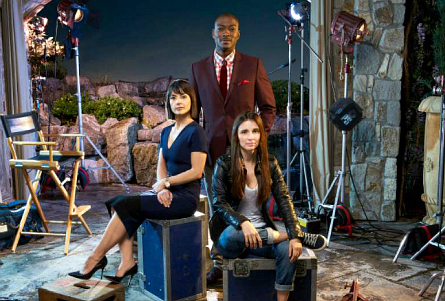 Actress Constance Zimmer who plays Rachel’s boss, Quinn King, said she was warned that everyone was going to hate her (Quinn). Zimmer was asked who she thought was more ruthless – Quinn or Ari Gold (Entourage)? Zimmer answered that because Quinn is a woman, she’s a bit more nurturing. She also said that she modeled Quinn off of a mix of Anna Wintour and Ari Gold.

“Quinn has a love relationship with Rachel that will continue to make her more warm” stated Zimmer. Appleby said she’s likes that the show went into a totally different direction this season. Zimmer said knowing that her and Rachel would come back together made it easier to be so bad – knowing the end result.

At the very end of episode 6, fans will welcome back a very familiar face (thanks to a phone call made by Quinn) and will be very happy. Most of all, Rachel will be happy as well.