THE VOICE: Frenchie vs. Tarralyn Battle Round War!

THE VOICE: Frenchie vs. Tarralyn Battle Round War! 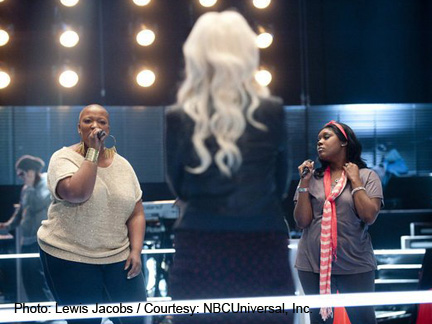 Tonight’s episode of NBC’s “The Voice” will enter the first night of the show’s “battle rounds”. Each team’s singers of eight will go up onto a boxing-ring style stage in pairs and fight with their vocals in a sing-off challenge.

Some noteworthy battles viewers will be treated with include: Beverly vs. Justin from Christina’s team, Elenowen vs. Jared from Blake’s team, Vicci vs. Niki from Cee Lo’s team, and Nakia vs. Tje also from Cee Lo’s team.

The one battle that was an epic ‘VOICE boxing match came from Frenchie Davis and Tarralyn Ramsey while singing Beyonce’s “Single Ladies”. The tension in the ring was strong. Some of the audience members took note and reacted before Aguilera commented on the contestant’s bumpy coaching session back-story. 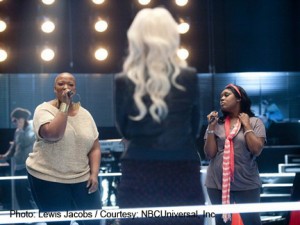 In a conference call with “The Voice’ V-Correspondent Alison Haislip, she stated that “Christina at one point basically became a couple’s therapist”. Haislip noted her surprise that Aguilera did not call-on producers to take-over. But, instead ” she owned it and she talked these two people through their issues”. Hmm… could it be Tarralyn Ramsey and Frenchie Davis she was talking about? We have good reason to think so!

Aguilera stated that the two performers were not getting along during rehearsals and commended them for coming together momentarily in order to sing-it-out in the battle round. Aguilera then had her decision to make on which one of the ladies would be remaining on her team.

During the on-stage competition process, contestants are allowed to bring a support team of friends and family members who are placed by production in the audience seating during their performance.

After Aguilera’s decision was made, the judges took a brief break. It was reported by first-hand account audience members that it was during this break while Aguilera was making her way backstage, that the losing contestant’s family member went up to Aguilera and grabbed her by the arm while exchanging some words. According to several audience eye-witness accounts, Aguilera called-out to security who quickly and as discretely as possible diffused the situation and removed the contestant’s sibling.