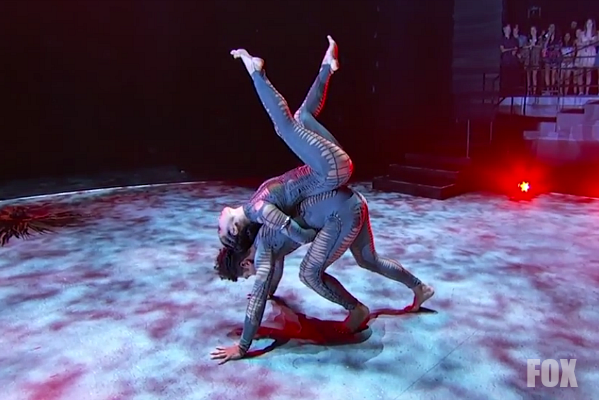 The second live show of “So You Think You Can Dance” (SYTYCD) featured more dance routines from season 14 Top 10 dancers along side their chosen All-Stars. They started the show off with a 1970s themed number choreographed by Mandy Moore (“La La Land”) and “Dancing with the Stars” Val Chmerkovskiy to the Bee Gees “You Should Be Dancing.”

The Top 10 had two dances on this live show. Once with their All-Star and once in their own style as a solo. Nigel said he’s looking forward to the solos more because that will show the judges what “they’re really good at.” He said the duets will take them out of their comfort zone.

The All-Stars later danced with speical guest performers in a stepping routine. The guests were invited via an earlier contestant of the show who auditioned with a stomp piece. Nigel invited her at that time to bring her whole crew to perform on the SYTYCD stage.

MARK (Hip-Hop) & COMFORT
First up was Comfort and Mark. They danced a Jazz number by Ray Leeper about a couple that wants to be together, but it’s probably not a good idea. JUDGES COMMENTS Vanessa said “Ray Leeper, that was steamy,” and “it’s kinetic how Comfort and Mark move together. Hot, amazing!” Mary couldn’t keep her eyes off Mark. “You gave a real raw and uninhibited performance.” She adde that it was almost too steamy for TV. Nigel was impressed by Mark’s “sharpness” and focus.

LEX (Contemporary) & GABY
Gaby and Lex were choreographed by Miriam and Leonardo in an Argentine Tango. JUDGES COMMENTS: Mary said “I would have liked the steam up a little higher”, and there were akward and wonderful moments. Nigel stated that the Tango is one of the most sexiest styles ever. He was lookng forward to seeing Lex in his own style. Vanessa said Lex is shining and “it’s incredible.” 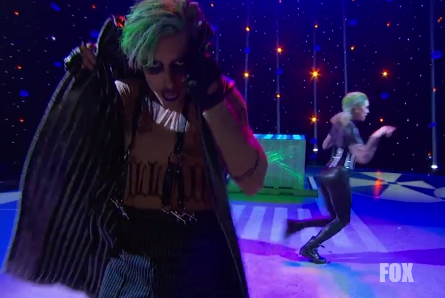 Luther Brown returned this week to choreograph a Hip-Hop routine for Kiki and Jenna. Kiki said he has to find his “inner freak”. Jenna called it “Kiki’s hip-hop redemption” since he failed hip-hop at the Academy. JUDGES COMMENTS: Nigel responded “Luther, I believe the Lord listened to your prayer.” He said Kiki was so bad at hip-hop before that he was surprised the All-Stars kept him at the Academy. But, tonight, he showed everyone why the All-Stars kept him! Vanessa reacted “that was lit! You completely crushed it!” Mary said “Kiki this was a game-changer for you tonight!” 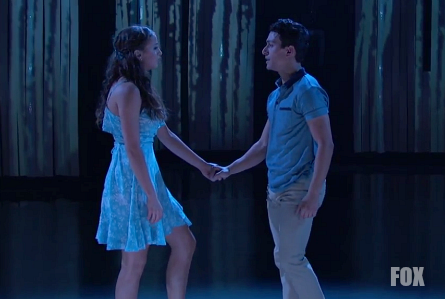 Jaci Royal choreographed a contemporary piece about a young girl that moves away from a boyfriend to pursue her dream. Sydney said it’s the story of her life. JUDGES COMMENTS: Vanessa called it a gorgeous routine and loved seeing Sydney in that style. Mary called it sweet and tender and there was “freedom” with how Sydney moved across the stage. Nigel loved the lift and called it beautiful. He felt the emotion.

LOGAN (Comtempoarary) & ALLISON
Allison and Logan danced their first LIVE dance number together due to Allison’s shoulder injury last week that prevented her from performing with Logan. Their choreographer was Brian Friedman who tacught them a jazz routine about a blind date in the future. JUDGES COMMENTS: Mary said “Logan I don’t think there’s anything you can not do. A truly gifted young man.” Nigel said Logan is capable of doing anything. Vanessa commented Logan gives her so many moments of “wow” and loves watching him. 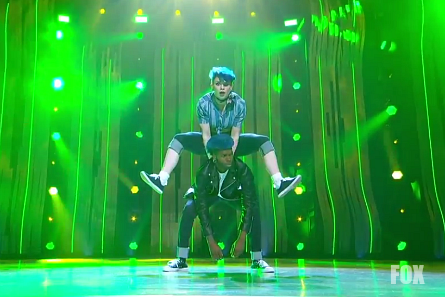 Kaylee and Cyrus got Pharside & Phoenix who choreographed a story about two aliens that got dropped into human bodies. Kaylee’s critique last week wasn’t the best from the judges. Cyrus said it’s good that they have room to grow. JUDGES COMMENTS: Nigel said last week he felt Kaylee was “too restricted and restrained.” But, not this week. He added that she looked fantastic and advised her to “stay unique.” Vanessa reacted “that was fire! you brought the heat! Amazing dancer and incredible performer.” Mary said her fear for Kaylee has been wiped-out this week by this routine. 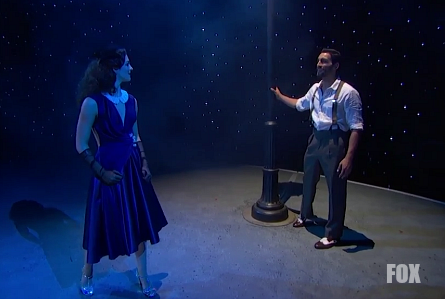 Taylor and Robert had a Broadway number by Al Blackstone. The piece was inspired by film noir from the 1940s. Al said there’s the most acting in Broadway choreography. The judges gave them a standing ovation. JUDGES COMMENTS: Vanessa said “Taylor you have a knack of making me cry.” Vanessa also told her she was taken back to being a kid and watching musical theater for the first time. Mary said she didn’t want the number to ever end. She was transported to another time and called Taylor a “star.” Nigel loved the style. He said Taylor was excellent last week and is excellent this week. They’re the couple to beat!

KOINE (Contemporary) & MARKO
Koine and Marko had to learn African Jazz dance by Sean Cheesman. The mysterious life of an insect was the theme. Cheeseman told them that they “will really have to feel each other’s bodies” for this routine. The moves involved some tumbling which Koine was not used to. JUDGES COMMENTS: Nigel said the performance was a great example of how music and dance can unite the world because everyone involved are from different countries. Vanessa reacted “I LOVED that!” She called Koine “amazing,” and animalistic. It was “fierce and dynamic” Vanessa added. Mary said it was “out of control!” She called it one of her favorite numbers of the night. 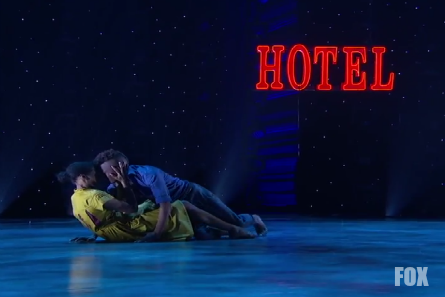 Stacey Tookey choreographed a contemporary number about a broken-down man who goes to a hotel and meets Jasmine who works there and is in the same place in her life. JUDGES COMMENTS: Nigel said he didn’t feel Robert’s emotion. Vanessa said her heart hurts, so Robert did something and loved seeing him do contemporary. Mary said Robert made a connection. But will have to fight hard and grow each week.

DASSY (Animation) & FIK-SHUN
Dassy and Fik-Shun were given a Bollywood number by Nakul Dev Mahajan. Dassy was playing a character who’s in love with a guy and comparing it to the Gods. They had a llittle fumble but picke right back up Vanessa said it was incredible and Dassy looked like she was doing it her entire life. Mary said Dassy handled the fumble like a true pro. “You were living in every single second of the routine and made it look so easy,” Mary said. Nigel commented that it was a great routine and great fun.

The bottom three were announced by host Cat Deely as being: Logan, Sydney, and Robert. The judges deliberated during the commercial break to decide who would go home. After the break, Nigel delivered the bad news and said the judges were shocked by the bottom three. Logan was the first dancer saved. Nigel noted that the judges vote was NOT unanimous and Robert was voted to leave. 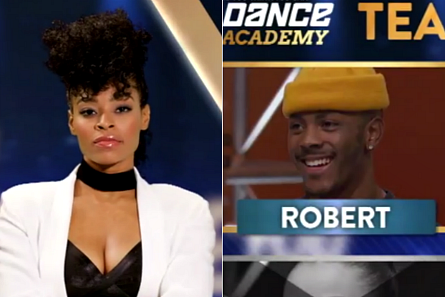