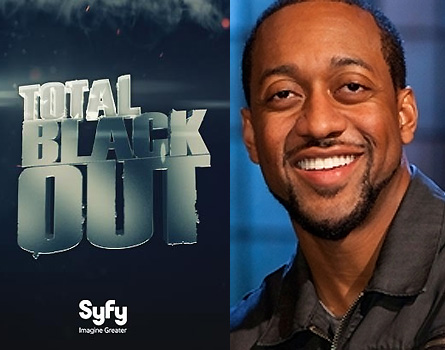 Your imagination becomes your own worst enemy in Total Blackout – Jaleel White
Syfy introduces new game show “Total Blackout” from executive producer and creator Henrik Nielsen that places contestants in total darkness and forces them to touch questionable objects inside tanks and correctly guess what they are. It’s a Fear Factor/Wipeout style of game show with a comical twist.

It’s a game that host Jaleel White describes “your imagination is your own worst enemy, and that’s where the comedy comes in. A lot of people say “It’s Fear Factor in the dark. But it’s not that” stated White. Imported from Europe, “Total Blackout” is said to be by White in a new Syfy teaser “America’s first no lights game show!”.
Audio from our interview with Jaleel White below:

During a recent phone interview, White stated that more times than not that the contestants think that the objects inside of the tank are much worse than what they actually are. Some objects that players have had to touch and guess include: snakes, tarantulas, mice and innocent items such as a stuff animal.

Some surprises came from contestants by his misjudging of them based on their appearance. White said that sometimes a muscular male contestant might be freaking-out while an older woman is “breezing through it”. Luckily for those contestants who have a tougher time with the dark, there is a psychiatrist on the set said White. He also said “thank God for editing” due to the fact that some contestants took up to 20 minutes just to enter the room after they were told that they could.

It’s a job that White admits is a bit out of his comfort zone in that it’s the first game show that he has ever hosted. And yet, it’s a job he accepted even after he had to hold a tarantula in his hand during his screen test for the show. White stated to deadbolt.com that the tarantula “was so damn big I just imagine that it was a gerbal”.
Sneak-peek at how the show is played in the video below:

White explained how “Total Blackout” is played- “there are either four players or four teams. There are three rounds. The challenges are all timed. The player that completes the challenges in the shortest amount of time move on to the next one”.
Some challenges on the show have to be guessed by players using their mouth. One such sample is in the video below:

White is currently competing on “Dancing with the Stars” and said that he is nervous about entering the finals of the show. He said in the beginning, he felt like Russell Crowe in the movie “Gladiator”. He also explained to one reporter that it is quite terrifying to be competing on the dance competition show. Even more so than the challenges on “Total Blackout”.

Tune into the premiere of Syfy’s “Total Blackout” Wednesday, April 25 at 10/9 c.