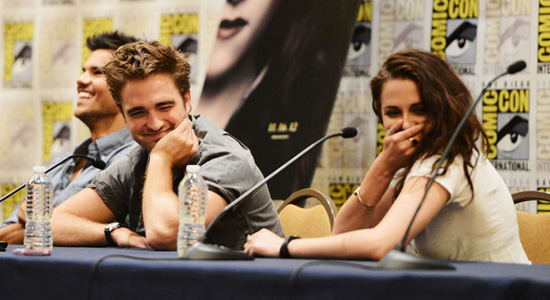 The cast of “The Twilight Saga: Breaking Dawn Part 2” walks down the red carpet at Comic Con 2012 and prepare for their panel in front of hundreds of fans and media.

“I never know exactly what’s going to go down on those panels…but we are showing something awesome and it’s really, really exciting. They’re going to lose their minds” stated Stewart.

Watch their interviews below:

“The fact that there’s six thousand people outside four, five years later. It’s amazing how determined they are to still come out for a week. There’s absolutely no change since the first movie” said Pattinson and commented that the Twilight film series has allowed him to have a much different life than he expected!

When asked about what to expect in the final movie, Kellan Lutz explained, “Breaking Dawn 2 just has even more adventure in it. A lot more action, and a lot more fun. If you love Breaking Dawn 1, you’re gonna love, LOVE Breaking Dawn 2”.

Nikki Reed who plays Rosalie Hale said “some of us might not see each other again. There’s no guarantee. This might be the last reunion where there’s all 100 of us in one room together.”

Taylor Lautner wrapped things up by saying “It’s an extreme honor. It’s been a fun ride, and it will stick with me forever”. Complete Coverage of THE TWILIGHT SAGA