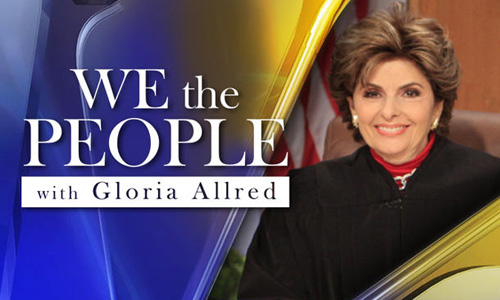 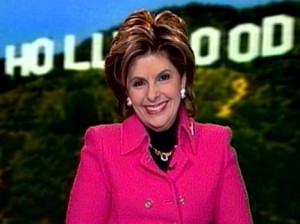 I recently attended a taping of a new pilot court/reality show featuring Gloria Allred as the judge, titled “We the People”. Executive Produced by Byron Allen who also produces “America’s Court” and “The Gossip Queens” among other shows, the cases for this show were completely re-enactments (as with “America’s Court” as stated in the show’s disclaimer). No real money exchanges hands, and non-union actors are hired to re-create real-life court cases. As I have also witnessed on “America’s Court”, and also now with “We The People”, one of the producers pulled an audience member to “cast” them on the spot as a litigant! Now that’s a low budget court show! “Judge Judy” would never do that.

One funny moment came in one of the court cases on “We The People” when, a “mom” forgot her “son’s” name… Executive Producer, Allen shouted “Mike, your son’s name is Mike!” Allred laughed, breaking from her overly stiff demeanor and actually admitted through her laughter that she knew it was all a game, knowing the cases are semi-scripted/semi-improvised.

Typical to her style, Allred occasionally took cheap shots at men, telling one poor male defendant of a study that found “It turns out men interrupt women way more than women interrupt men.” But for the most part, it seemed like Allred was “doing an impression of herself”, forcing her abrasive personality on the courtroom. In reality, her acting was worse than the litigants. In the later cases, Allred seemed to lose interest, rushing through cases, mostly due to the show being behind schedule.

Perhaps these new knockoff court shows are concerned about potential litigation or high costs. These shows will never hold a candle to the Judge Judy’s of the world if they continue to have fake or recreated cases and cut corners. Do we really need ANOTHER mediocre court show?…

Reported and Written by: John Perry