The Heat Is On AMERICA’S GOT TALENT Top 12 Recap 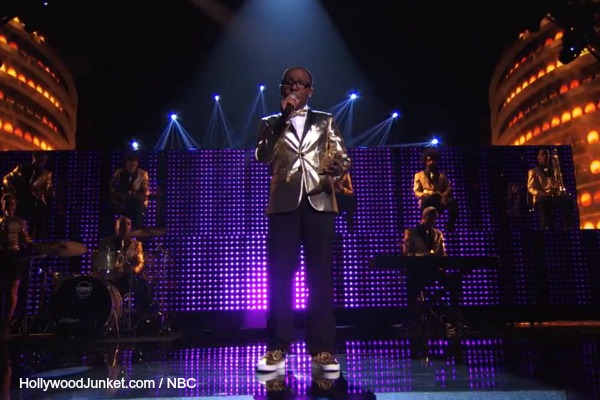 It’s the second semifinals on”America’s Got Talent” with twelve acts where only six more will continue.  The show continue its “Final Save” this week which allows viewers to vote to save their favorite act among the acts with the least amount of votes. 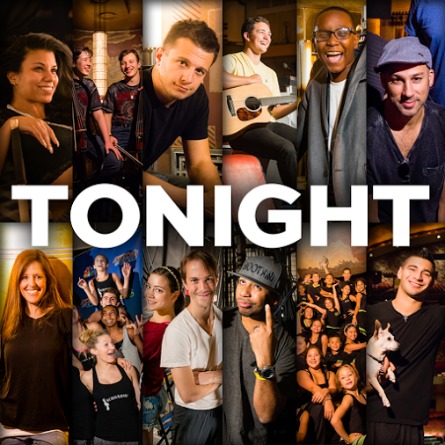 Judge Howard Stern said, “It’s going to take a very crafty, smart performer to win this thing. He said because they’ll have to showcase their talent in ninety seconds.  “Only the smartest performer will win. This is when it gets great!”

JONAH SMITH
How To Open A Show!

Johna performed “Love Runs Out” by One Republic with a classic spin. Mel B yelled “yes, that’s how you open up a show! You bring it. You sound amazing and you delivered and you’re so entertaining!” Howie said he agreed “what a way to open-up a show.” Then gave them a back-handed compliment by telling them they are the best act of the night! (they were the very first act of the night). Heidi really liked them, stating – “I hope your love won’t be running out anytime soon.” Howard told Jonah he’s his favorite male singer. He asked him “is this your best performance?” He said he doesn’t think so, and that his performance should have been good enough to close a show, and he didn’t think it was.

BAILA CONMIGO
Hard NOT To Be Excited!

After their very fast, salsa number, the audience could not stop cheering for them. Howie said, “It’s hard not to be excited. You guys are amazing.” He said the eight kids steal the show and the adults bring the show down. Howard reacted “how do you win? You’ve got to do something a little different.” Howard said they need to bring the kids out by themselves to change up the energy. Heidi said she LOVED it! “It makes me feel good watching you guys.” Mel B disagreed with Howard and said “you did so many different things. I absolutely loved it…you really gave it your all!”

JAYCOB CURLEE
Rose To The Occasion!

He said when he went back home after his last performance, he just practiced and practiced. Jaycob sang “Your Song” by Elton John. Howard told him he rose to the occasion and said it was a “smart song choice” and his best yet. Heidi said it was a “small” song for him and told him he doesn’t have much of a stage presence. Mel B said America would like him more than that song he just performed. Howie told Jaycob “It’s about where you are now…maybe you spoke to them (America).” We will find out in The Results show.

Mat is as struggling magician traveling from town to town to perform shows just to make ends meet. He performed a trick on the AGT stage that he said has never been done before. His trick was a combination of a card trick and a disappearing act of Mel B’s phone. She wasn’t happy when it got wet then disappeared, only to reappear inside of a seat at Radio City Music Hall. Howard said he was glad that Mat took Mel B’s phone from her because she’s always on it and he finds it rude. Howard loved the trick. Heidi said “this was mind-boggling” and she’s going to think about it all the next day. Howie said all he could think is “Holy S–t” and called it “amazing” and “it was consistent”. What you do is quite genius and what he does is “on point” and she said thank God he retrieved her phone or else they “would have had words!”

ACRO ARMY
No Words To Describe!

They train five to six hours per day six days per week. Their act consists of throwing some female partners twenty feet up into the air, then catching them. Mel B said “I don’t think I have words to describe what I just saw.. that was incredible, OFF THE CHAIN!” Howie said the word is “amazing” and they were more than “be all that you can be!” Howard, who stood-up for them said it’s crazy that they didn’t place higher. They were almost eliminated last time. He said maybe it’s hard for home viewers to process it. “It was mind-blowing! Fabulous!” Heidi said “I already felt like I was in Las Vegas watching one of the biggest shows….this is already a million dollar act!”

Howie said “we see that you don’t know if you’re worthy because you start off shaky” and told her she deserves to be sure of herself. Howard said “everyone in this competition is great,” he said so there’s no reason why she should doubt herself. He also told her, “I think you’re a marvelous singer, but there’s something missing.” Heidi said “It’s so courageous of you to sing a Beyonce song.” Mel B said “this is so frustrating for me because you can sing. You just didn’t give it, but why? It fell flat.”

Howard said he brought back Wendy because “every once in a while, someone gets shorted.” He said Wendy is so funny. Howard also told everyone that “when she was voted-off, I gasped!” After her performance, Howard said, “It’s such a tough show for comedians. I hope America appreciates that she brought her A-game tonight. Heidi also liked Wendy, saying her comedy material “is relateable and she directs the audience. “You’re really, really funny.” Mel B said I just love a really strong, independent funny woman, and thanked Howard for bringing her back. Howie was on his feet for her. “You hone each word, you write the material. That’s harder than any other form of entertainment on here tonight. You won the crowd and you were funny,” he said.

Blue Journey performed probably their best act yet to Radio Head with animated looking silks and visuals. Heidi was impressed, “You were like a Dali painting coming to life. Definitely one of my favorite acts of the night.” Mel B. equally loved it and said they should stay! “The amount of creativity that went into that was amazing. You are so unique,” she told them. Howard said it was a little “sleepy”, and “only one act should win $1 million. Really stunning and risky doing it to such a slow routine.” He said sometimes risk pays off sometimes it back-fires.” Howie called it “a mash-up” and “it’s great, fantastic, amazing all in one” and urged America to vote.

Their dream is to play like the big lead guitarists in big stadiums, only with cellos. AGT is one step in making that dream a reality. They played James Bond theme song “Live and Let Die” by Paul McCartney and Wings on their cellos. They got a standing ovation. Mel B said “You come out here and you just smash it! It sounds amazing” and called the band “hot!” Howie said “you two are perfect, but felt like Paul McCartney didn’t show up.” Howard agreed with Howie, “why not bring a singer with you? You’re kind of waiting for Paul to show-up” Heidi said most proud is their Grandpa, and Paul McCartney would be proud, and Axel Rose would be proud.

Smoothini said he thought he was going home last time. His act was contained to him and Mel B on the Radio City Music Hall stage, and was called “bar magic” by one of the judges. This time, he’s going bigger. He’s going “old-school!” He asked for one of Nick Cannon’s shoe laces, and Howie’s ring. He had the ring interchanging between the lace and Howie’s pen. Heidi said “it was awesome. You really earned your name today.” Mel B said “you kept us all mesmerized, You stepped-it up.” Howie said “I’m a big fan. Last time the room didn’t explode. But tonight it did. You’re
one of the reasons tonight is magical.” Howard said “I still maintain that this act feels contained.” He said Smoothini didn’t connect with the audience and the audience at home who are all “left-out.”

Christian kept with the theme of having his dog Scooby balance on his feet as did his usual hand-balancing act – this time to a Top Gun theme. He brought new dog out at the end of his act named “Scooby 2”. The judges were not impressed. Mel B said, “I do feel tonight, you did two hand-balancing acts. Towards the end it fell flat,” and she wanted more. Heidi said “more Scooby,” and her kids love his act. Howard said Christian is a front-runner, and it made him relax. “This was not your best night. If you should go through by some miracle, you have to go back to what made you incredible,” said Howard. Howie said he had confidence, and owned it. He said it became more about his dog than his strength. Christian replied to the judges comments by saying with his skill, it’s hard to learn something new fast.

Quintavious said he must have gotten his strong voice form his Grandmother who sings with him at home. Quintavious sang “I’d Rather Go Blind” by Etta James. Time was limited after his performance and the judges each only had a few seconds to comment. Heidi said “Your name is as unique as your talent.” Mel B was thrilled, “You’ve got it! You just got it!” Howie reacted, “Your jacket says it all. You are golden! You could win this thing!” Howard referred to Quintavious to make a point “Only twelve years old and you taught people how to sell an act and how to sell a song. America vote for Quintavious. He deserves it!”

It’s the final night of “America’s Got Talent’s” Semifinals where six more act will round-off the Top 12. So far, acts that are continuing on in the competition are: Mike Super, Sons of Serendip, Emily West, Miguel Dakota, Mara Justine, David and Leeman. 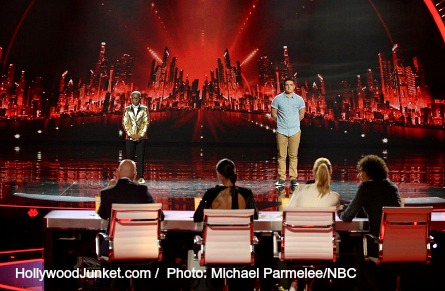 The acts who performed on Tuesday’s show who received the highest amount of votes from America and entering into the Top 12 AGT competition are: Mat Franco, Quintavious Johnson,  Emil and Dariel and Acro Army. 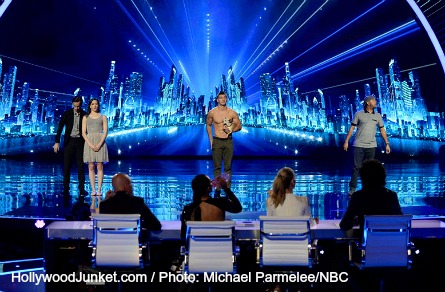 The remaining two acts were dependent of their survival in the game based on the judges votes. It was down to Smoothini and Christian Stoinev. Last night, Howard told Christian that somehow he became a “dog act”. He told him, “you used to be the guy that balanced on one hand and on a champagne bottle.  You have to get back to that.” 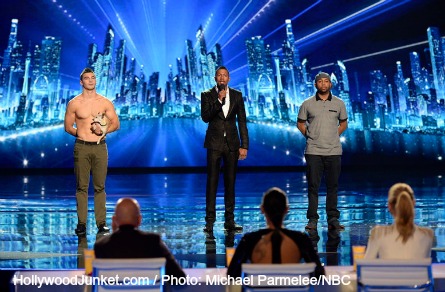 Judges Votes: Mel B said “this is difficult. Christian, last night was two tricks and the rest of the act was about your dog. Smoothini, are you a big enough act for a million dollar show? She voted for Christian. Howard said, “Christian, I really feel you blew it last night. You came out, it was lazy and sloppy. Your dog is an accent. That’s why you’re in this predicament. Smoothini, you have to go much bigger.” He said the act that was consistent week after week was Christian, but told him to come out with his “A-game”. Howie’s vote would be the final one if he voted the same as Mel B and Howard. Howie said “Christian, I thought you did well last night.” Howie told Smoothini that it was small. “Size does matter, Christian, you’re going through!”