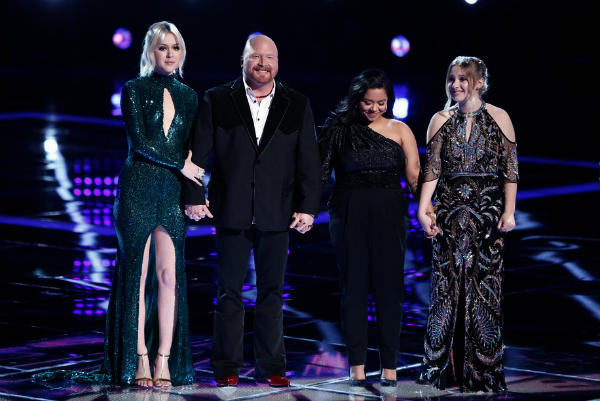 The second night of “The Voice” season 13 finale started out with an encore performance from Team Blake’s Chloe Kohanski singing “Bette Davis Eyes” which she closed Monday’s show with.

“The Voice” welcomed back previous ‘Voice artists from this season who performed with super star singers. One unique show-stopping performance was by Chris Weaver. Viewers will remember Weaver performs at church and worship leader by day, and in drag by night. He put-on a spectacular show with three of his other drag queen friends performing “Bang, Bang” and joined by original artist Jesse J. Needless to say, the performance brought-down the house, and yes, many shoes were thrown!

Charlie Puth followed Chloe’s “Bette Davis Eyes” performance. Later in the show, Brooke Simpson held her own with Sia while performing “Titanium.” Sia, also treated us to a Christmas song from her Christmas album. And Billy Idol rocked-out on stage with Team Blake’s Chloe Kohanski.

Worship leader by day and entertainer by night – Chris Weaver returned to perform with three of his drag queen friends “Bang, Bang” song who were joined by original artist Jesse J.

Blake and Miley squared-off in a old-style Western dual. Next, it was time for Chloe to rock-out to “White Wedding” with Billy Idol. Earier, when coach Blake Shelton revealed the news to her, she was overcome and beyond excited! 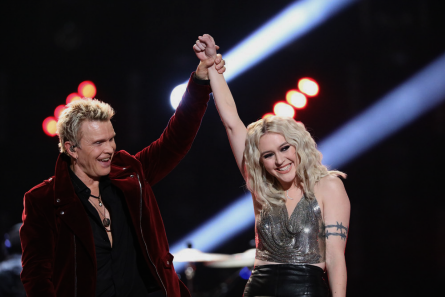 Next, the coaches got out of their chairs to present the Top 4 with boxed gifts. In the boxes were car keys to brand new 2018 Toyota Camrys.

Demi Lovato performed “Tell Me You Love Me.”

Jessie J. performed with Top 8 contestant Davon Fleming. The next performance was Team Blake’s Red Marlow with Country star Vince Gil who sang “When I Call Your Name”.

Another memorable performance was by N.E.R.D. with former ‘Voice coach Pharrell Williams. Followed by Sia’s return to the stage to sing a song from her Christmas Album. Then, it was time for Jennifer Hudson to explain what “J Hud Productions” is all about.

The Top 4 came out to the stage and shared some final words to their coaches.
Chloe said Blake’s encouragment includes him never asking her to change, and to be herself. Red said Blake and him have been like brothers and they like to get together and have fun. Brooke told Miley that Miley has been her sister, her friend and “one heck of a leader.” Addison was extremely emotional while thanking Adam for believing in her from the start.

Carson Daly announced the artist in fourth place who was Red Marlow. The artist announced in third place was Brooke Simpson. 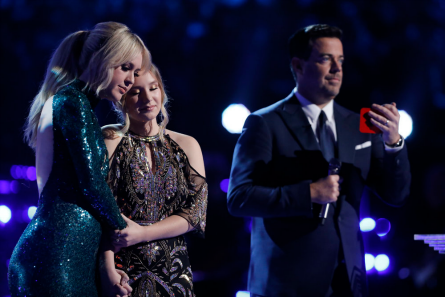 The last two contestants left standing were Addison Agen (Team Adam) and Chloe Kohanski (Team Blake). Blake told Chloe that she’s a super-star and “maybe you’ll let me open for you one of these days!” Adam told Addison that she is an astonishing human being “This is not the end of anything. This is the very beginning.” He stated that the work starts tomorrow and wants to be a part of that. The winner was Chloe Kohanski!