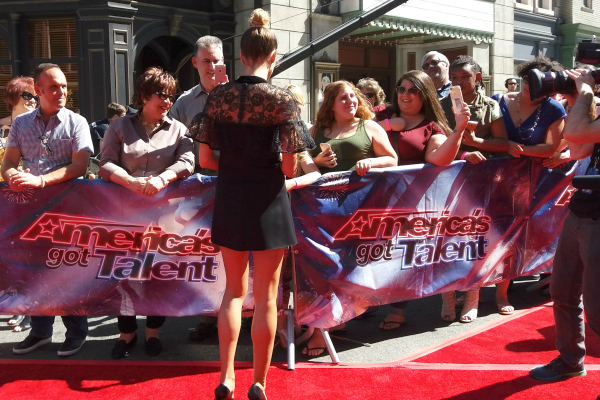 What is it really like to be part of a big audience crowd on one of the biggest summer shows on network television? We took the dive and this article will tell you all about our experiences.

HOLLYWOOD JUNKET attended the last day of taping of “America’s Got Talent” (AGT) the Judges Cuts round at Universal Studios Hollywood. We learned a few new things after going to two separate shows dates that were night and day from each other.

The first time attempting to enter the show was a fail. A mistake occurred from following the check-in instructions from a previous ticket. Please note to future AGT audience guests, there are two separate check-in locations that vary depending on which day you attend. After being re-routed from one end of Universal Studios, clear to the other end, it was too late to get into the show and we were turned-away.

When going to an AGT taping, it’s better to ALWAYS arrive early. And here’s why – you may be treated to a whirlwind of an adventure such as what happened the second time that I went and got in.

If you think that you’re early, chances are, you aren’t early enough. After my first failed attempt to attend a show taping, the second time I was better prepared. Although my ticket stated to arrive by 2:30 pm, I was there by 12:45 pm. There were approximately thirty people in line ahead of me. The parking garage is where AGT potential audience members, along with “The Voice” audience were all corralled to wait in line. At the exact spot where I and a few others were standing, there was a foul odor that we had to endure. It was obvious enough that one of the check-in staff remarked about it and apologized for the inconvenience. 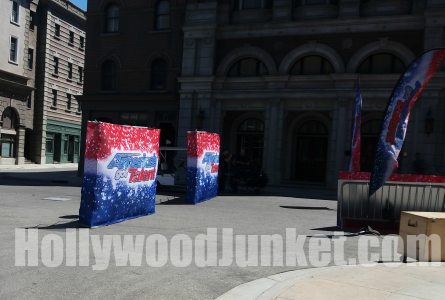 At around 2 pm, the check-in staff rounded-up the first 100 of us in line and escorted us onto shuttle trams. The same trams that are used daily in the Universal Studios Hollywood Tram Tour Ride! They carried us through a section of the back-lot of Universal Studios. We were treated to a tour guide who narrated that section of the tour the whole way until we arrived at the stages on the lot. 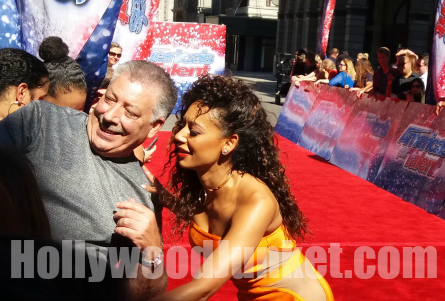 Pictured: Mel B. with fans

Next, once, we were dropped off of the tram, we got an up-close view of the Universal Studios back lot where television shows and movies are shot. There was one such production occurring around the corner from where we were. They had a nice spread of food (referred to as “krafty”) and we did not.

We were quickly escorted to the “America’s Got Talent’ red carpet area. Though the sun was brutal (I wore a hat), we got to interact with each judge one-by-one as they rolled-up in a limousine. The production crew asked if anyone had questions for the judges. The approved questions were filmed by their production team. 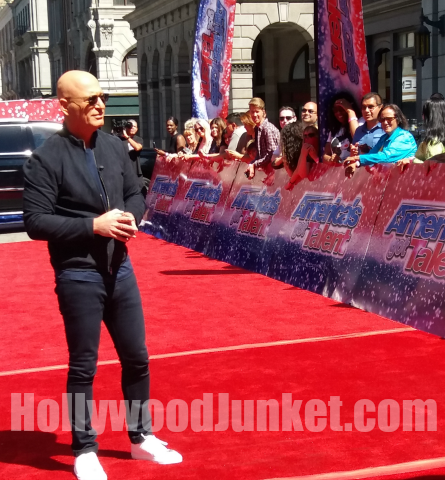 The first judge to arrive was Howie Mandel who whizzed down the red carpet giving out fist-bumps. He stopped for one question which was what would he like to see on the show. In true Howie fashion, he answered by not answering. Heidi Klum was next. She was very generous with her time and genuinely seemed to be interested in talking to the fans as she stopped and chatted while taking selfies with a few of them. 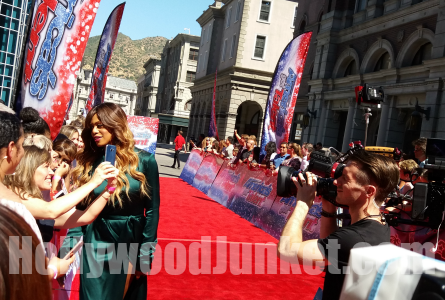 The guest judge that day was Laverne Cox from Netflix show “Orange is the New Black”. The guest judge is the only judge during this round that has the power to use the Golden Buzzer. When pushed, the Golden Buzzer catapults a contestant straight to the live shows. The rest of the contestants are at the mercy of the judges deliberations that determine who stays and who goes. Cox arrived to the red carpet in a beautiful emerald colored gown with a sexy high slit. As she made her way down the carpet, I overheard a couple of women ask who she was. Apparently these ladies don’t subscribe to Netflix.

For on-camera takes, the film crew and producers ask everyone to yell out the names of each judge with statements like “we love you Heidi!”, as well as cheering and screaming.

The last judge to arrive was Melanie Brown (Mel B) who eased her way through the red carpet crowd. One of the show’s producers told a fan to ask Mel B. if she could replace a judge, who would it be and why. She answered “none” and that she loves all of the judges. Before that, it appeared that one member in the crowd managed to briefly upset her. We aren’t sure what happened there.

Simon Cowell would have been the next judge to arrive, but he did not. We later saw him at the next stop. My suspicions were he didn’t make it maybe due to time constraints.

The group of 100 people were treated with a live stunt performer. This occurred just on the other side from the red carpet. We can’t give any details away as to what the stunt was or who the contestant was. At this point, everyone was still roasting in the hot sun. The judges were saved from this when during a technical difficulty, they took a break in the shade. However, Simon had his red carpet moment here when he chose to stay behind and talk to fans. The result was tons of selfies with Simon. 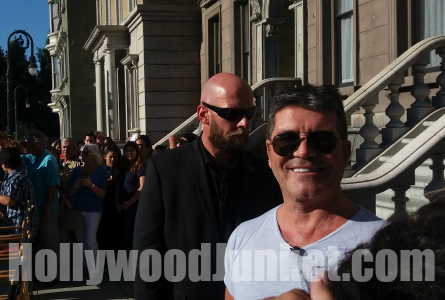 It was about 4:30 pm by this time, and the audience staffers rushed-in some Dunkin Donut holes for us to munch on. The boxes of donuts were very limited and the lucky few got one or two of the holes. Soon after, an older woman in the crowd collapsed and medics were rushed-in to take her out of the crowd. We saw her again later that night and we’re happy to report that she was okay.

After the contestant performing the stunt went through much preparation and a brief interview with new host of AGT, Tyra Banks, he achieved his act which was motivated by something Simon had said to him in an earlier round (to be seen later on television).

By the time the 100 of us were brought into the studio where the show tapes, it was 6 pm. We were told earlier that they expected the show to go until 7:30 pm. The rest of the audience was already seated in the studio patiently awaiting for the show to start. Little did they know, 100 of us were treated to much more than a show. We were treated to a full-on AGT whirlwind of an experience.

Once the show ended (around 7:20 pm), our audience section was the first to be excused. The tram shuttles awaited outside. As we rode away from an adventurous day on the tram, a beautiful sunset shined upon the Universal lot. A very fitting end to a glorious day.