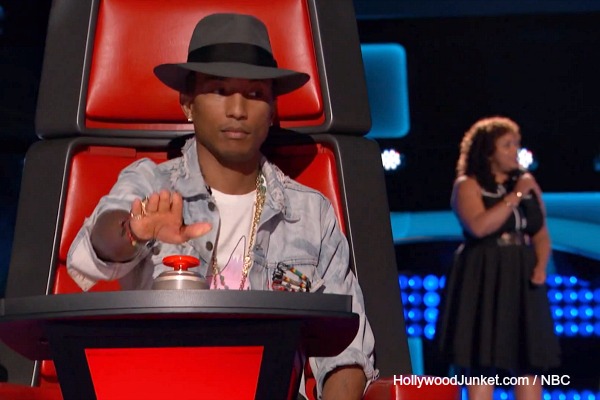 The new ‘Voice coaches Gwen Stefani and Pharrell Williams are quickly catching on to the game. In tonight’s episode, they both prove to be a viable threat to veteran coaches Adam Levine and Blake Shelton as they are successful at beating Adam and Blake out and getting very good talent for their teams. Pharrell said it’s not just technique that he’s looking for, he’s also looking for “connection”. He said his strategy is just to be nice. Gwen’s personal strategy is tempting contestants with her branded “Team Gwen” T-Shirts and offering-up fashion sense.

Danica is a 25 year old singer who likes to sing R&B and sang at The Apollo at age 15 and won! Soon after, she made her first record which was followed by not much success.

Coaches Comments: Adam said they (the coaches) were in shock and their jaws were on the floor. He told Danica that she has one of the best voices he’s heard in a long time. Gwen offered Danica her style advice. Pharrell asked Danica “will you PLEASE be on my team” and “I’m scrawny, but I know what to do with that voice!”

Her mom back-up sang for Earth Wind and Fire, Meatloaf, Neil Diamond. Her dad is a saxophone player and percussionist. Her mom wanted her to go to an Ivy League school and worked three jobs. Maiya studied music at Yale. She lives with her mom to support her. Maiya sang “Stay With Me” for her blind audition.

Coaches Comments: Blake said “I think you can win this show. I believe in you that much.” Pharrell stated, “when you sing, there’s a conviction. Its about amplifying who you are and telling your story. And said he’s interested in who she personally is and that’s what he wants to amplify. Gwen said “I just want to say welcome to Team Gwen.” Adam said the difference between having success on the show and winning the show is being able to evolve and he said he will make sure he won’t take her talent for granted and will push her. Pharrell shut Adam down by telling her he’s only going to push her ambitions, not his! Gwen tried to bribe Maiya with fashion – shoes and clothes. Pharrell ended-up getting Maiya, she said, because he stood up for her.

Alternative rocker, Taylor, started an Indy Rock band in 2011. He got a kid in 2013, and quit his band and is now running his own event business with his wife.

Coaches Comments: Adam said he was early in pushing his button for him. HE said Taylor was “Elvising out!” Pharrell said “I don’t know anything about baseball, but I know he stole a base,” and said Taylor belongs on his team. Blake compared him to Ryan Tedder, then said, “dammit man, you’re a great singer.” Pharrell met Taylor’s family backstage after Taylor chose him for his coach.

Joe is 17 years old from Nashville, TN. He was raised in a singing family with his Mom. He has only sang with his family at school and fairs.

Coaches Comments: Pharrell told Joe that Blake is a “Nashville Whisperer” and mocked Blake by saying “Look into my eyes, Nashville TN!” Blake pulled out a big hat and asked Joe how serious is he going to take Pharrell when all he’s doing is waiting for him to make an Arby’s sandwich. Gwen told Joe that his stage presence could be more “loose”. Joe chose Adam because Adam told him that he is like his little brother.

Menlik’s parents were born in Ethiopia. After moving to America, his dad worked as a janitor, his mom worked as a fast-food cashier. They were able to save enough money to start their own soul-food business. Menlik dropped out of high school to play gigs with his Reggae band.

Coaches Comments: Blake asked Menlik, “be honest, since she (Gwen) turned around, I don’t have a chance do I?” Gwen through out there that Sublime opened for “No Doubt”. Adam told Blake, “I mean NO CHANCE”. Blake thought he had Menlik until Gwen turned around and admitted defeat before Menlik picked a coach. Of course, Menlik chose Gwen as his coach.

Sugar’s Dad sang background with Alice Cooper and Patti Labelle, among others. Sugar listens to a lot of old soul and R&B and looks up to her Dad for inspiration. She currently plays with a wedding band and is a manager of a shoe store. She sang “Chain of Fools” for her blind audition.

Coaches Comments: Gwen said she has the perfect voice. Blake said “everybody likes sugar!” Sugar wouldn’t say if it is her birth name. Pharrell regretted not pushing his button after learning her name especially. Blake told her she has a unique voice with a “slow bravado.” Gwen was surprised when Sugar picked her and asked her if she is sure. Sugar said she liked that Gwen wants to take her personality and voice and find where she really shines.

Reagan is a very poised 15 year old. She met Kelly Clarkson who’s from her hometown. She stopped playing Volleyball in order to focus more on music. She put a feminine twist on “Give Me Love” by Ed Sheeran during her blind audition.

Coaches Comments: Gwen got out of her chair and begged Reagan, “I want you on my team.” Reagan told Blake that she’s from Texas. Gwen told her she was born with a God-given gift because her voice is so much better at 15 than hers was at 17. Blake said Gwen has never won “The Voice”. Everyone was surprised when Reagan said she likes singing R&B. Then Pharrell really regretted not pushing his button for Reagan.

Taylor is from Nashville and works as a cashier on a food truck, but her real passion is music. She started at eight years old when she got a fiddle, then started singing after that. Taylor describes her music as “retro country.”

Coaches Comments: Pharrell said her tone is so amazing, “so confident and you’re a star!” Adam told her to remember that Blake almost didn’t push his button. Blake answered that because she was singing a Loretta Lynn song which is why he was taking it all in first. Blake said she has a quality in her voice that just doesn’t exist anymore in Country music.

Jimmy Miligan is 35 years old. He said he wants to live his dream and make his father proud. He’s a father of four. After his bind audition, Blake told him it wasn’t solid enough. Pharrell said he waned to see him take more chances and nailing it. Gwen enjoyed the high runs that he did. Adam advised him to “do the song and be comfortable with it…do some things that ‘wow’ the coaches.”

Caitlin Lucia is an 18 year old from Huntington Beach who is obsessed with Pez. Pharrell told her he goes crazy for people that give him their personality when they sing. Adam noted a personal battle in her voice – “I heard your own identity as a singing battle with the singers who influenced you.” He advised her to come back to The Voice. Blake said he was “probably the closest” to pushing his button. He refrained, he said, because he was thinking she “may not be able to hold out a note.”

Andy Cherry is 28 years old and started singing in church. He’s a Worship Leader and works at a coffee shop. He was signed to a Christian record deal and tried to please everyone. Then he was let go from his record deal. The coaches got really excited when they heard his blind audition song “Everybody Wants to Rule the World” by Tears For Fears, but then quickly disappointed. Blake said there was lack of control and it was too aggressive. Gwen said he played with the melody too much, but he has a good voice. Adam said when it gets played with so much where its too different, it loses them. Pharrell gave him props for trying to do something different.