Fight for It on THE VOICE Blind Auditions Night 3 Recap 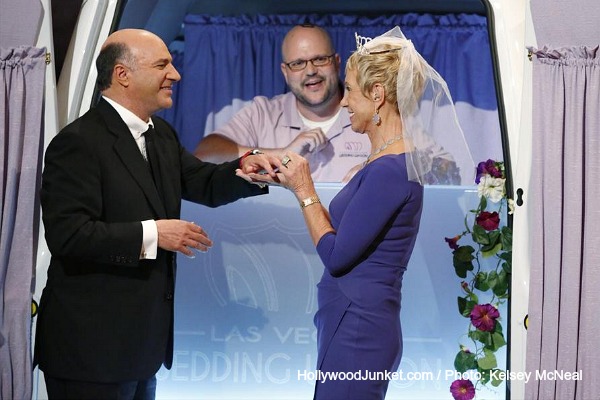 It’s the only reality show where millionaires help to create more millionaires! It’s “Shark Tank”, and it’s returning to ABC for a sixth season. The “sharks” who are self-made millionaires either devour the entrepreneurs who come before them asking for their money, to pieces, or actually help jump-start their struggling companies, turning their dreams of grander into reality are: Mark Cuban, Babara Corcoran, Lori Greiner, Robert Herjavec, Daymond John, and Kevin O’Leary (a.k.a. “Mr. Wonderful”).

A surprise celebrity entrepreneur to step in front of the sharks will be late night talk show host of “Jimmy Kimmel Live”, Jimmy Kimmel with his side-kick Guillermo Rodriguez.

This Season, One Shark Will Walk Out! WATCH Below!

After hearing the entrepreneurs pitches for how they will use the Shark’s money to grow their businesses, all the sharks want to know is how to get the most bang for their buck and their return on investments. Each Shark may consider striking a deal. But, the entrepreneur can only select one shark unless the sharks decided to team-up. Sometimes the sharks fight each other for a deal. Other times no sharks will want to partake in a company. Then sometimes – when the show gets really interesting – when a shark will keep quite, and wait for all of the sharks to pull-out from a potential investment, then strike! Making the deal all to themselves.

Over $40 million dollars in deals have been made on “Shark Tank” since the show first aired. In the season six premiere episode, Sharks will be shown a variety of products from a baby sleep tool, to a new way to charge cell phones. Viewers will get to see which proto-type will have O’Leary saying “this is the worst idea I’ve ever seen.” 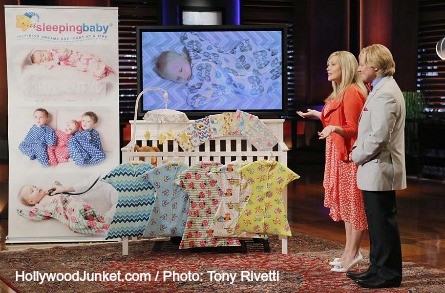 One of the cash seekers in the the season 6 premiere episode is a heart-felt story of a family who owns their own small company inspired by their new-born baby. Stephanie and Brett Parker invented a baby garment that is part blanket, part onesy called “zippity zip”. Their company is “Sleeping Baby” and they are seeking $200,00 for a 10% stake. They’ve been successful at selling a little over a million dollars worth in products via their $500 website. They invested another $200 for cost in material to make the zippity zips for a total of $700 in start-up costs. The sharks were impressed. Lori told them they are doing everything right.

The next brave soul is Michael Elliot who owns a small business called “Hammer & Nails.” He asks for $200,000 for a 20% stake. His business is a male grooming shop that does manicures and pedicures. His slogan is “the nail shop for guys.” He wants to put the “man” in manicure. His company already made $150,000 within 7 months. His clients range from millionaires to guys that work at the cable company. His dream is to franchise and believes it will be “the Starbucks of male nail shops.” Mr. Wonderful tries to snap him out of it by asking him how much MONEY it will generate. Viewers will be surprised by this entrepreneur’s past hip-hop history. O’Leary told him “the numbers rule!”

Another interesting product was created by fresh out of college students Bill & Kyle who also want $200,00 for 20% stake. Their product is called “Amber” – a cell-phone charging station. Their hope is that the cell phone charging stations will be sold to venue owners for $2000, and be used and placed at these venues such as bars, movie theaters, conventions, concert halls, etc. 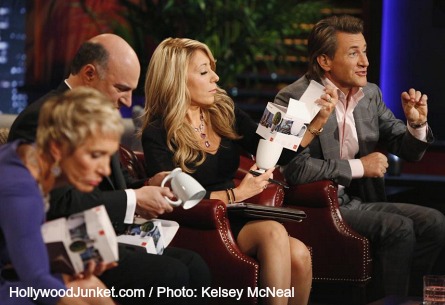 The reality of this reality show is that according to Mark Cuban, the deals can go on for an hour to an hour and a half to two hours. Cuban said the producers edit them down to 15 minutes and make them (the sharks) look good, and look smart!

Babara said what she likes about the recent seasons vs. the beginning seasons is that they’ve gotten to “love each other.” She explained, “You probably don’t pick that up on air so much.” She said they really get affectionate. Cuban joked that he personally doesn’t care about Barbara, she’s attractive, he said, but has no interest in her. Barbara responded that she has an interest in him because he has a lot of money and he pays half for most of her deals.

Lori said it’s going to be a great season because “it’s a more emotional season.” The stakes are high, and people want so badly to change their lives. Robert said the businesses are better. “We are making some real money out of this,” he said. Lori said she noticed real, raw emotions. She said, “They’ll be tears of happiness.” Robert said, “there’s some tears of sadness too.”

Kevin O’Leary said about this season, “we have multiple deals in the millions now.” Also, he said “the structures that they’re financing, is no longer just equity.” He said it’s finding its way into the show by natural osmosis because of the show. “We’re all growing together.”

Daymond John said the deals are much better. The entrepreneurs know us, we don’t know them. “So they know how to push our buttons.” Being playful, he said, he refuses to work with other sharks. “So, we become nastier!”