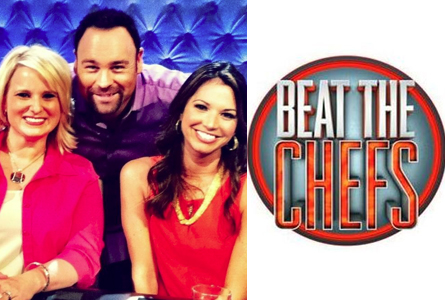 HOLLYWOOD JUNKET sat-in during a recent day of filming of “Beat the Chefs” at Raleigh Studios in Manhattan Beach, Ca. The set is one that displays two separate kitchens. One kitchen that is very homey and equipped with daily cooking utensils and appliances. The other, is very modern, high-end equipped with cooking utensils and professional cooking tools found in the every-day professional restaurant kitchen. 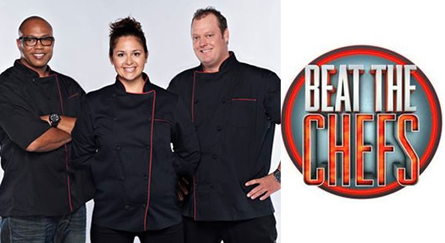 Hosted by Matthew Rogers (former “American Idol” contestant), “Beat the Chefs” has an upbeat and fun vibe to it. One that I have not experienced since another GSN game show, “Catch 21”. The stage of “Beat the Chefs” is divided into two separate portions. One is the homey kitchen where contestants wrangle their team of two to work with them to whip-up a dish that will hopefully prove to be more tasty to the three food expert judges than that of the team of three professional chefs! These chefs are Antonia Lofaso, Jeff Henderson, and Beau MacMillian. 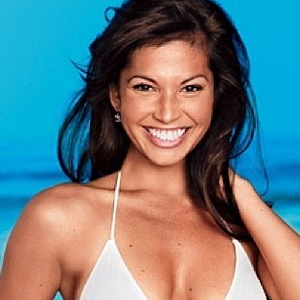 From what we observed, each production day consisted of the filming of one, one-hour episode that was a themed episode. For instance, one day was the Southern Food cooking day. Each episode begins with Rogers standing in a dramatic spotlight – very similar to “The Iron Chef” show openings. After introducing the contestants, host Rogers announces to the contestants and chefs their cook-off challenge in which they must make the same dish but in their own style.

The show is broken-up into two separate teams of three contestants challenging the chefs. For example, the first team was a home cook who was accompanied by his wife and friend who called themselves “Chef D. and the Divas”, to go up against the chefs to attempt to cook the best Southern meat loaf and potatoes meal. The second team, “The Dinner Belles” who were three award winning ribbon cooks – their lead cook was a blue ribbon winner, had to challenge the chefs in a cook-off of the best Southern beef and potatoes meal. The winner of each challenge is revealed at the very end of the episode. The winning group wins $20,000. The ritual of how the winner is revealed is through lighted podiums. The podium in front of contestants is orange. The one in front of the chefs is blue. These podiums flash a solid white light until the winner is revealed with either an orange or blue lit podium to indicate the winner.

The deciders of who wins against the chefs are a panel of three food expert judges – Brad A. Johnson, the only food critic to win a Cordon Bleu World Food Media Award and whose identity, up until the airing of the first episode of this show on GSN, is shrouded in complete secrecy. That is, no one knows what Brad Johnson looks like! The second judge is successful food blogger Christy Jordan whose website called “Southern Plate” receives 30 million hits per month. And the third guest judge of the day was former Dallas Cowboys cheerleader and former contestant on “The Bachelor”, Melissa Rycroft. This third chair is a rotating one that features a different celebrity each episode that (I’m guessing) fits into the theme of the challenge meals to be cooked.

For Rycroft, it was her growing-up in Dallas, Texas that she qualified to judge the Southern dishes on this episode. During the cook-off challenges, each competing team has a clock placed on them to make the meal in that allotted time. The first challenge had one hour and forty-five minutes. The next one had two hours. In case viewers at home will be wondering, the studio audience indeed sits there during the whole time the cooking is taking place in real time! Also, in case if viewers at home will also be wondering, NO – the studio audience does NOT get to sample and eat the cooked food unfortunately! 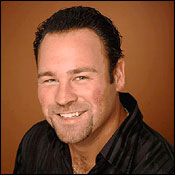 Other celebrity guest judges included: Christina Ferrare, Julie Powell, Ali Landry, and Eric Roberts. There is a lot of good, fun-natured and friendly competition banter between the chefs and the challengers that makes for entertaining television. Along with a great host, wonderful back-stories from the contestants and entertaining food cooking matches, “Beat the Chefs” is a guaranteed winning show that I predict will be perhaps the network’s most successful show yet! And I mean extremely successful.