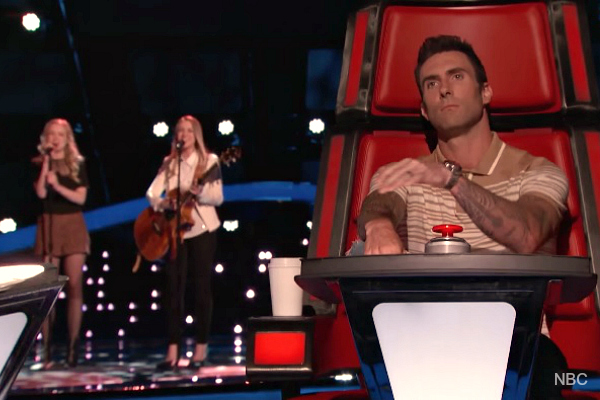 The second week of “The Voice” Blind Auditions had more surprises for the coaches as they listened out for distinctive voice that they’d like to add to their teams for season 9.

Gwen said about the contestants, “I just love to hit my button to change their lives.” Adam’s team so far, had eight artists from rock, pop and country genres. Gwen has eight unique artists on her team that include two soulful ones. Pharrell also has eight artists and said “it’s always fun to find a diamond in the rough.” Blake has eight artist as well. Blake said he’s got “killer strategy” and “all bets are off.”

Night two of the Blind Auditions had more surprises for the coaches. One Elvis look-a-like had a contradictory soulful sound. The fist singer of night two was Dairus Scott who had a three-chair turn.

Darius plays a lot of different instruments, and also into fashion. He works as a stylist. Darius is funding his own album and said it’s “draining”. He sang “You Make Me Wanna” for his Blind Audition. The three coaches that turned their chairs were Adam, Pharrell, and Gwen. Gwen called his voice “magic” and loved his strong presence and style. Pharrell said Darius is “super-special”. Adam said he’s fired-up and is going to fight “like a maniac” for talent. Darius picked his coach based on a tattoo he got in college. He chose Pharrell.

Viktor is from Hungary and he sang Marvin Gaye song “What’s Going On”. Adam told him he could win the whole thing. Viktor happens to like country. “The Victor of The Voice” is what Blake said the sign would read after he wins. Adam’s begging and pleading worked. Because he’s now Victor’s coach.

Adam and Gwen liked her take on the Roller Skate song. Adam said “the good was really good.” Blake liked her rawness and vintage sound. Gwen invited Julie to come back.

Cole is a sixteen year old from Tumecula, the same city as a ‘Voice season one contestant Senya, who inspired him. “Dreaming with a Broken Heart” by John Mayor is the song Cole picked for his Blind Audition which brings back all the emotions from when his Dad passed-away. All four judges turned their chairs. Gwen complimented him for being 16 and able to “lock eyes” with her! Blake’s pitch was that he recorded Senya and is friends with her. He got Cole on his team with it.

Alex has already toured with her former band and played on Jimmy Fallon. After the band broke-up, Alex went out on her own. From Nashville, Alex’s distinct sound got the attention of Gwen and Adam. Gwen said her personality was coming really coming through, but pointed-out some voice issues. Alex chose Gwen.

Celeste put her singing on the back-burner when she got pregnant. She got her Bachelor’s in English from Troy University. She sang “Love You I Do” by Jennifer Hudson she said to show her full range. Her voice prompted Pharrell to turn his chair. Blake said her performance wasn’t perfect, but “full of heart.” Pharrell said she’s “great and amazing”. He said when he realized that she was singing because it really meant something to her and he had to reward her ambition by hitting his button.

Then, “The Voice” reminds us of how it got to be “The Voice” when it brings us two amazingly talented artist so unbelievable

Their parents met in a country band. When they were little, their mom pulled them up on stage. They said they do harmonies naturally. They harmonized “Thank you” song. Gwen was the first coach to turn, followed by Adam. Then Blake and Pharrell joined them. Adam said “you could hear each of you being compassionate to each other” and called them “the most perfectly fitting duo I’ve ever heard.” He also called them “lightening in a bottle”. Blake said “that performance truly was phenomenal” and told them he’s the only one who’s ever taken a duo to the finale. Gwen describe it as “magical” because they took a song and did it in an unusual way. Pharrell said his folk song artist Sawyer Fredricks won last season.

Andi and Alex said they “vibed” with Adam, so they chose Adam.