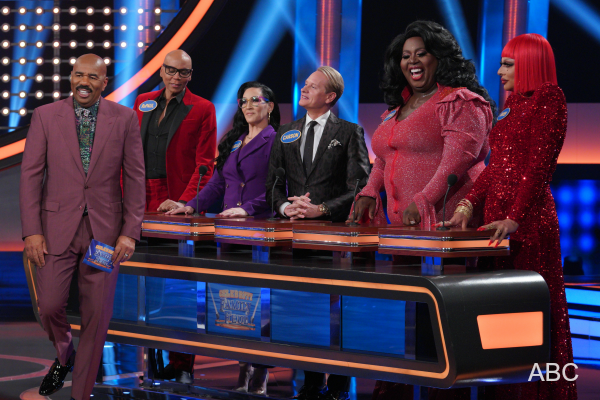 Back in February of this year, one month before the world changed, ABC network was busy at work taping its sixth season of “Celebrity Family Feud” for all to enjoy! Hollywood Junket was on the set for one of those episodes. Fast-forward three months later to the present, this much appreciated entertainment hits our televisions on Sunday, May 31st, 8-9 pm EDT on ABC.

Host of “Celebrity Family Feud” comedian Steve Harvey makes it worth being part of the live audience studio tapings which happens at CBS Television City in Hollywood. Harvey does this by interacting with audience members in-between down time from filming during each episode. Traditionally, Harvey does Q&A sessions with the audience. One question an audience member had was who inspired him. He answered, Richard Pryor. A good question was what was the funniest answer on “Family Feud”? Harvey said it was “Pork-upine,” then explained the context of the show. His description was hilarious! Fans in the audience were very familiar with “pork-upine” and were heard talking about the popular episode amongst themselves.

Some behind-the-scenes info given by Harvey was that he’s writing “Think Like a Man” follow-up book, which is expected to be out this year. The thing that he did that flopped, he said, was “the dating website.” Harvey stated that it got sold back to Match.com. He said you have to fail to learn not to do a dating website again.

Harvey also revealed that he bought the international rights to “Family Feud” and filmed an episode in Ghana, Africa. He said his dad was a slave until age 12. He knew only he was from Africa. He said it was a different feeling waking-up in Africa. Another tidbit, the same stage manager working on the set of “Celebrity Family Feud” is with him on all the shows, including when he films abroad.

Harvey said when he saw Warren Beatty and Faye Dunaway mess-up the Best Picture win at the Oscars in 2017 by saying “La La Land” instead of “Moonlight.”  He was SO HAPPY!  He smoked a cigar in his study inside the house for the first time in celebration because he never thought he’d live-down his messing-up at Miss Universe.  He said thank goodness he got asked back to host.  Harvey said his wife still gives him grief over smoking that cigar in the house.

“Celebrity Family Feud” films two show the first half of the day. And two more shows during the second half. We were in attendance during games where actress Jenifer Lewis (“Black’ish”) went against actor Sebastian Maniscalco (“The Irishman”) in game one. And, actor Scott Foley (“Scandal”) vs. actress Jenna Fischer (“The Office”) in game two. Some examples of game questions we witnessed this day were: If your husband was hooked-up to a lie-detector test, what would you ask?; what makes a kiss passionate?; The difference between men’s underwear and women’s?

This season might be the first time a repeat contestant played twice for two different teams. That contestant is Carson Kressley of “Queer Eye” fame who played once with “RuPauls Drag Race” team, then again with the “OG Queer Eye” team.

Jenifer Lewis from “Black’ish” brought her siblings to play the game.  One brother and three sisters.  She exclaimed that she’s the youngest in the family.  Harvey praised Lewis for being the Mother of black Hollywood (referring to her memoir).  He said they have to recognize each other when the Oscars don’t!   Jenifer Lewis’ side played for a charity started by actress Taraji P. Henson.

Team Sebastian was led by actor Sebastian Maniscalco from “The Irishman” film who played “Crazy Joe Gallo.”  He brought his wife, her parents, and his sister.   Steve Harvey joked and asked Sebastian what did he “say” to his wife to get her.  Because guys like them need help.  And, he needs to let other fellows like them know what he said!  Sebastian answered that he met his wife on a treadmill at the gym and just asked her out.

Some questions were: How are men’s underwear different from women’s panties?   What would you charge to your husband’s credit card right before getting a divorce because he cheated.  Some answers were: a car, a house.  When Jenifer got stuck for a minute.  Yes, she managed to keep talking and digress for a solid good minute to avoid getting buzzed.  She told Steve, you know I would just “kick his ass!”

Steve Harvey commented on one contestant’s answer for the difference between men and women’s underwear which was the opening. He said the opening to men’s underwear is useless. He doesn’t use it because it’s too small! We’re sure his comment will be edited out of the show.

Foley’s side included Scott Foley, his wife Manika, brother, best friend, and Manika’s best friend.  On the “Office Ladies” side was Jenna Fischer (“Pam” from “The Office”), Angela Kinsey from “The Office”, Pam’s sister, mother, and Angela’s sister.  Jenna’s sister is a third grade teacher, Angela’s sister is an 8th grade teacher.  Jenna’s mom is also a teacher.   When Scott introduced his side, he joked when introducing his family by stating each one was NOT a teacher!

Foley played for a Women’s cancer fund, and Jenna Fischer’s side played for a teachers foundation. Fischer revealed that she and Kinsey have a podcast that talks about episodes of “The Office.”  They talk about behind-the-scenes to the episodes.  Steve Harvey praised them and called it “pimping the game.”  Harvey said he could do it too by doing a podcast about behind the scenes things on “Family Feud.”  Steve said he does get a lot of questions.

After given the question “what makes a kiss more passionate,” Harvey asked Foley’s wife what does SHE do to make passionate kisses. She answered “Bite!”  Then said “we have zero”, so she told the world that because they wanted to win.

Harvey said that the Foley side were the “lovers” because they got almost all of the how to make a kiss more passionate.   Answers included: fondling, touching hair, “lying down” or “boinking” as the board read; slipping the tongue.

Another question that stumped them that they almost had was what would a wife ask her husband if he were hooked-up to a lie detector.  Answers included: If he’s a “ho” or did he cheat, and “do you love me?”

Office ladies played for a Teachers’ fund. Steve said it’s not right that teachers have to spend money out of their own pockets to buy school supplies.

“Laugh hard every day,” Harvey said is the secret to staying young looking. Final words of encouragement that day to his audience was “You have not because you ask not.” He said this was the proverb that changed his life.

Other matches this season include: “Queer Eye: OG vs. Queer Eye: New Class” on the premiere episode May 31st. Also “The Bold Type vs. RuPaul’s Drag Race” airing Sunday, June 14th; “Andy Cohen vs. Real Housewives of Beverly Hills,” and  “Drew Carey vs. Kevin Nealon” both airing on June 7th.