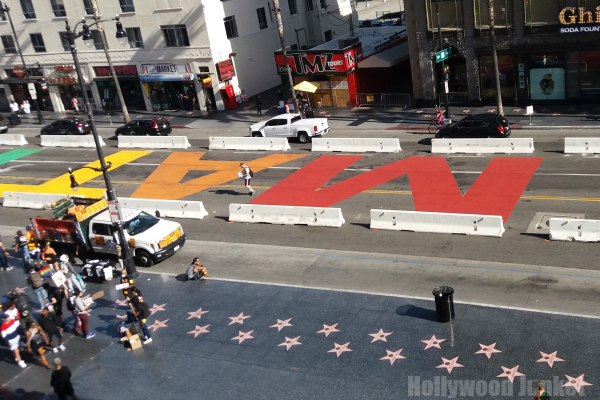 Hollywood’s epi-center, the Hollywood Walk of Fame, the strip of Hollywood Blvd. located between LeBrea Ave. and Vine Blvd. in Hollywood, California is world famous for a reason.  Not only are there a slew of Hollywood shops located along the street, it’s also the home to the TCL Chinese Theatre, the Academy Awards at the Dolby Theatre, along with Disney’s El Capitan, and of course, the immortalization of celebrities with cement Stars with their names imprinted along the sidewalk. Back in the day, according to older generations, it wasn’t uncommon for a fan to run into one of their favorite celebrities somewhere along that strip.

The names imprinted upon the concrete stars on the pavement of the Walk of Fame of talented artists in the entertainment industry are divided into five categories: Television, Motion Pictures, Recording, Theater/Live Performance, and Radio.

Typically, the Walk of Fame is a leading tourist destination in Los Angeles, garnering about 10 million visitors annually (according to NPO Plog Research as cited on Wikipedia).  However, this year has been more than abnormal in the uncertain time of the Covid-19 pandemic crisis which forced many businesses, including those on the Walk of Fame to shut-down. We reached-out to a city official to get The Hollywood Walk of Fame profit loss dollar amount due to the stay-at-home-orders brought by the pandemic, and have not yet heard back. This article will be updated.

During a phone interview with Hollywood Junket, Hollywood Chamber of Commerce publicist, Ana Martinez confirmed that the last celebrity to be honored with a star on the Hollywood Walk of Fame this year before the Covid-19 pandemic was American radio journalist Susan Stamberg, on March 3, 2020.

Also in June, the Hollywood Walk of Fame announced their new Class of 2021 who will be receiving their stars along the Boulevard.  Not yet being able to complete this year’s star ceremonies, Martinez noted that they were “postponed.”  Two ceremonies were rescheduled for June, which were a “no-go.”  One is pending for August, and two more are scheduled for this November and December.

Ironically, according to Wikipedia, the cement stars on the Hollywood Walk of Fame are spaced six feet apart. The same distance recommended by the World Health Organization for humans to stand apart from each other to decrease the chances of spreading the Covid-19 virus.

Each year, the Walk of Fame receives numerous nominations.  From those nominations, a board of members who consist of current Star honorees decide which talent will receive stars in the upcoming class.

Given the current events, and with the Academy making an ongoing effort to be more diverse, we asked Martinez if there was a correlation to include a number of African American artists to receive stars in the class of 2021.  Coincidentally, the same number of African Americans are being honored this year as next year.   Martinez notes that the Walk of Fame has been diverse since 1960 including Blacks and Hispanics.  She said “the Hollywood Walk of Fame is an equal opportunity Star giver.”

What will the Hollywood Walk of Fame ceremonies look like in the year 2021 with the likelihood of the pandemic still looming?  Martinez reacted,  “I’m hoping this is all over with before next year. ”  She said if indeed, things are back to normal by January of 2021, “we will go back to doing the ceremonies as we always have.”  She said it all depends on how far the virus will go.

The full list of the Hollywood Walk of Fame Class of 2021 is below: