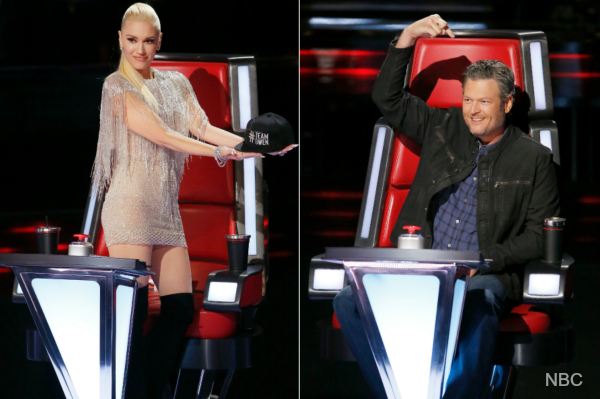 The fun continued with the coaches in the second week of “The Voice” Blind Auditions. Adam’s unfortunate fashion choice to wear a black-and-white sweater has been the target of many Blake jokes so far. Blake has referenced Adam to a bar code, Waldo (from Where’s Waldo game), The Hamburglar, and a Mime.

He’s also tried to play many of the coaches, Gwen included! Blake offered-up some serious insight into the show to a young female contestant in exchange of helping him to live the girl dream during his battle with Gwen to win the female contestant over. And, why do girls want to have fun? Blake wants to know!

After losing a contestant to coach Alicia Keys, Blake told her that he was surprised that “The Voice” brought her back as a coach because she was so terrible last season. He told her he was trying to get in her head. Alicia said her head is “ungettable.” 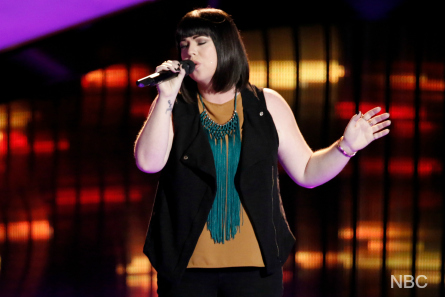 MISSY ROBERTSON is 34 years old from Sacramento, CA. Missy’s a daughter of a pastor, she grew up singing every Sunday and is in a band with her sister called “The Out Go”. She sang “Scars to Your Beautiful” for her Bind Audition. COACHES: Alicia vs. Blake. Missy told the coaches she chose the song specifically for the message of telling people they are beautiful just the way they are and wants to spread more messages like that through songs. Alicia said she’ll help her spread her message. She chose TEAM ALICIA. 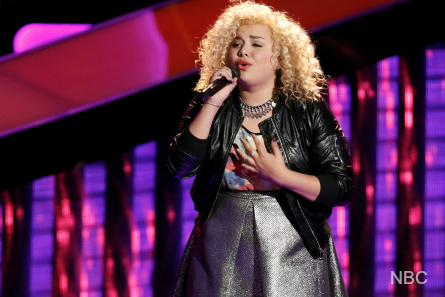 AALIYAH ROSE – She’s 14 years old and sang “Rise Up”. COACH: Gwen turned. Adam’s response to her age was “it’s so depressing that Aaliyah was born in 2002.” Aaliyah was a heaven-sent for Gwen since she was aching to have a young girl on her team. Gwen noted that when she turned, Aaliyah lost her composure a little bit,but then it came back. Also not lost on Gwen was Aaliyah’s similar sense of style. TEAM GWEN

JOSH WEST is 17-years-old and displays a rocker look with long, curly hair (Adam compared his hair to Eddie Vedder). Josh is a big fan of the 90’s, and got a 4-chair-turn with Duran, Duran song “Ordinary World.” Adam said “the coolest thing about it, it fills the room.” Blake had no idea who the song was by. Alicia was impressed at the way his voice climbed, and climbed. Blake said he also loves the 90’s. But his 90’s is filled with legendary Country stars. Gwen said she loves his voice more than any of the coaches, and added, ” I did hang out in the 90’s as well (wink, wink!). After an evident connection with Adam, Josh chose TEAM ADAM. Adam said “it was like talking to a young me.”

MICAH CLARE TRYBA is 24-years-old. COACHES: Gwen vs. Blake. Blake was impressed with the notes that her voice hit which he can’t sing. Micah sang a capella in college. Blake said she blew him away and thinks she could be standing in the Winner’s Circle. Gwen told Micah not to be tempted on how good-looking Blake is and complimented Micah’s intuition and control of her voice calling it “tender and sweet”. “As a female, there’s things that we can work on together to get your personality through… it’s about who you are and sharing your story.” Blake stung back with “I don’t know what it’s like to be a woman. But, I know what it’s like to win The Voice.” Micah chose TEAM BLAKE.

GABY BORROMEO is 22 years old from New York. COACHES: Blake vs Adam. Adam said he was surprised it wasn’t a 4-chair-turn and Gaby could win “with no problem”. She blew his mind. Blake told her that by the end of her performance it was incredible. He liked that it sounded like she was smiling when she was singing. Blake try to sway her to Team Blake by telling her “there’s one of you on Earth” and “you probably can win this and it’s a shame that someone like Adam could screw it up.” Blake’s tactics didn’t work because Gaby chose TEAM ADAM.

KAWAN DEBOSE (30 years old) COACHES: Adam, Blake, Gwen. Adam said he rendered him speechless. “It’s been a rough go this season” . Adam paid Kawan with the highest compliment when he told him with excitement “the only man that can do the same falsetto with the kind of ease is Prince. You truly are one in a billion.” Adam guaranteed Kawan that he’d be the number one priority on Team Adam. Alicia affirmed that Adam has a really special place on his team for Kawan. Blake said it’s because he has hardly anyone on his Team! Blake said of Kawan’s audition, “you just lit this place up…Someone hands you a microphone and a great song, all the coach has to do is get out of your way!” Kawan chose TEAM ADAM. Adam said he’s never felt stronger connection than with Kawan.

TROY RAMEY – sang “Wild World”. COACHES: Blake, Adam, Gwen, Alicia. Adam called him “a major contender to win this thing.” Gwen said it’s almost like it was YOUR song. Troy said it was one of his Dad’s favorite songs and he’s not here anymore. Gwen called his voice “tender.” Blake worked his mom by having her come out to the the stage to give her a hug after Troy said she can’t stop talking about his dimples. Blake told Troy, “you sing like a MAN.” Like picks up rocks just to break them in his hands. It’s the strength of your voice.” Gwen said she was moved by him and feels like they should be working together. He chose TEAM GWEN. 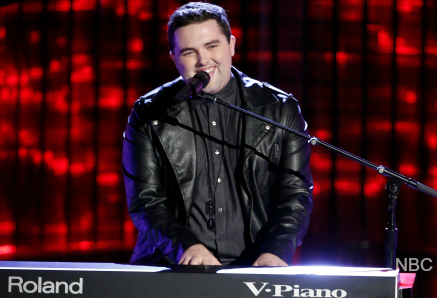 JACK CASSIDY (18 years old) sang “One of Us” while playing keyboard. COACHES: Adam vs. Alicia. Adam said “such a passionate commitment to every single word that you sing. There’s nothing more important than that.” Adam noted that there were some imperfections in Jack’s voice, but those imperfections make someone great. Blake rallied for Alicia by stating that he had a vision of Jack playing the piano with Alicia Keys. Then Alicia said it’s her first time seeing someone choose to only play the piano. Then Jack revealed that his grandma is the famous Shirley Jones from the Partridge family. Jack chose TEAM ALICIA.

TAYLOR ALEXANDER (25 years old from Nashville) – blew the coaches away by singing Cher’s “Believe” song in a Country style that worked really well. COACH – Adam told Taylor “that was the single craziest thing that I’ve ever heard.” Adam had no other coach to compete with, but still praised Taylor with “you are so weird and wonderful! What WAS that?” Alicia loved Taylor’s style of “flipping” that song. Blake seemed confused by the song choice. Taylor wasn’t all Country, and not all pop either. Taylor fit the category of BR5-49, which is an old Country band that mixed various genres. Blake told Taylor he didn’t turn when he saw Adam and “there’s a wide open lane! That’s the best thing for you.” However, Blake had some concern for Adam because he did offer-up some of his help “when the time comes.” Adam was touched. TEAM ADAM 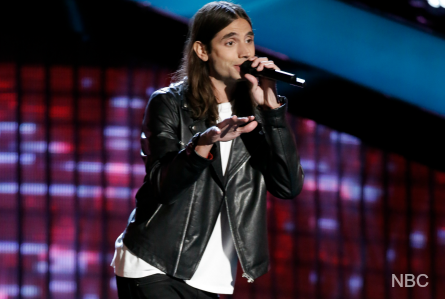 JOHNNY GATES sang “Maggie”. COACHES: Blake, Gwen, Alicia. Johnny moved to Los Angeles in 2015. His band soon went on tour with Rod Steward after that. After that, he took a break from his band. Blake said Adam has moves like Mick Jaggar. Blake complimented Johnny that if he stayed in the genre of music he’s currently in, he’ll leave with a fan base. Gwen said she came from a ska band and thinks they could work really well together. Johnny responded “us garage band kids have to stick together” and he chose TEAM GWEN. Gwen’s response was that Johnny is “truly rock and that’s a rare thing on the show.” 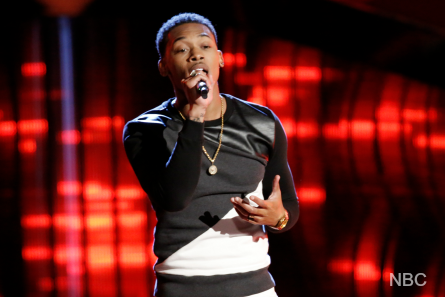 MALIK DAVAGE – works at a clothing store even though he’s super talented and has had some great music gigs. The most special thing to Malik is is baby girl. “This opportunity means everything to me,” he said. Malik sang “Sure Thing” by Miguel” .
COACH: Adam. Malik cried after his Blind Audition and Gwen gave him a hug. Then Adam offered his chair which Malik quickly took. Malik told Adam that he’s a young guy from Washington DC who’s trying to do what’s best for his daughter. Then his Mom and daughter came out. Adam gave mom a hug. Alicia or Gwen said “a man who wears his heart on his sleeve is a rare powerful man.” Adam said he clearly Malik has raw talent and is a cool dude. TEAM ADAM

LAURYN JUDD – (16-years-old) She’s a Junior in school and in music choir. Lauryn sang “Girls Just Want to Have Fun”. Lauryn sang in two different tones which made the coaches think that there were two people on the stage. COACHES: Gwen, Alicia, Blake. Gwen said she could work on warming her voice up. Alicia noted that she heard a different tone come out of one body and said there’s so much in there she’d like to pull out. Blake said Lauryn has so much power when she wants it, and he would love to be the one to help her figure out what kind of artist she wants to be. Lauryn picked TEAM ALICIA. Alicia said there’s a ton of stuff that they can build and bring out.

CAROLINE SKY is age 16. Her family had a band called the Rocking Robbins. She sang “Will You Love Me Tomorrow” by Coral King (who wrote the song at 17-years-old) one of her idols. COACHES: Gwen vs Blake. Gwen said Caroline doesn’t have any nerves. Gwen offered to share her experiences with her. Blake said no he hasn’t lived the girl dream, but he wants to and wants to know why girls just wanna have fun. He offered Caroline that he’ll help her with the show if she helps him live the girl dream. She picked TEAM GWEN.

JOSH HOYER (40 years old) – sang “Oh Girl”. Josh is a touring musician who is married with three daughters. He expressed that The Voice opportunity came at a much needed time. He chose “Oh Girl” song because “it makes you appreciate what you have” he said. COACHES: Blake vs Gwen. Adam said he has a lot of soul. Gwen said she doesn’t have anyone like him on her team. Blake said he thought this guy deserves to be on this show, and to be on the winning team – “there’s nobody like you on the show.” Josh’s influences are Otis Redding, James Brown. Gwen said as a working parent, she can share her experiences with him. Josh picked TEAM BLAKE. Later, Josh said the place he’s at as a musician right now, “the wiser choice was Blake.”