Comedian Gets Simon’s Golden Buzzer on AMERICA’S GOT TALENT: ALL STARS Week 3 Recap!

Back for Redemption on AMERICA’S GOT TALENT: ALL-STARS Week 2 Recap!

Comedian Gets Simon’s Golden Buzzer on AMERICA’S GOT TALENT: ALL STARS Week 3 Recap! 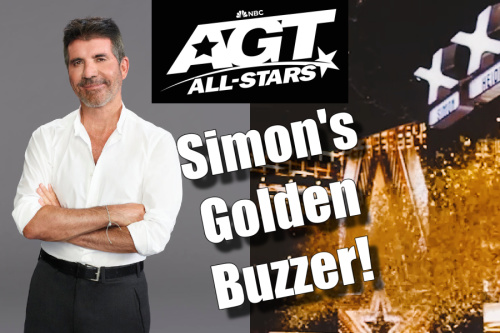 So far on “America’s Got Talent: All-Stars” the acts who are going to the Finals are: Bello Sisters, Light Balance Kids, Detroit Youth Choir, and Aidan Bryant.  After this week’s episode, two more contestants will join them.

The “America’s Got Talent: All-Stars” acts are voted on by Super Fans all across America.  They’ll put through one act from this episode.  One additional act will be voted through from the judge’s Golden Buzzer.  Simon Cowell is the only judge who has the Golden Buzzer in this episode.  When Terry Crews asked him about his choice, Simon said to impress him, he’s looking for “the best of the best of the best.”

The first act of the night, viewers will remember, he was a finalist on this past season of “America’s Got Talent” season 17.  He was saxophonist Avery Dixon.  He told his memorable story of being bullied in high school.  Host Terry Crews quickly took to Avery and called him his brother. 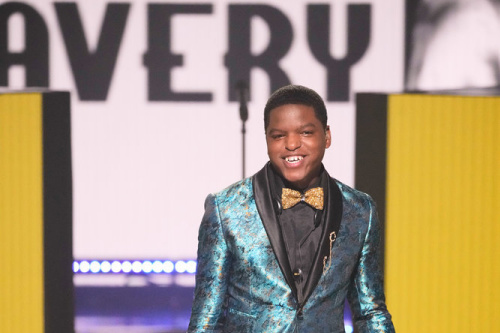 On AGT season 17, Avery got the Golden Buzzer from host Terry Crews.  He said it turned his perspective all around and he really had a shot at winning.  Avery was beat out by singing trio Chapel Hart in the Finals.  He said he’s back to win and get his mom a house.  The judges were really happy to see him.  Avery said he’s been getting calls from all over the world to come and play.  What was different this time with Avery was that he came to All-Stars with a band.

Avery played “Happy” by Pharrell Williams.  Howie told him he IS an ALL-STAR.  He went from an amazing talent to a show!  “You are a show!” Howie said.  Heidi said she loved him and had to stand up and dance.  Simon said this is why they wanted to make this show because when you’re great, competition brings out the best in people.  He said Avery has given himself a shot at winning and he has set the bar.  Simon said he almost gave him the Golden Buzzer, but thinks Avery will make it through. 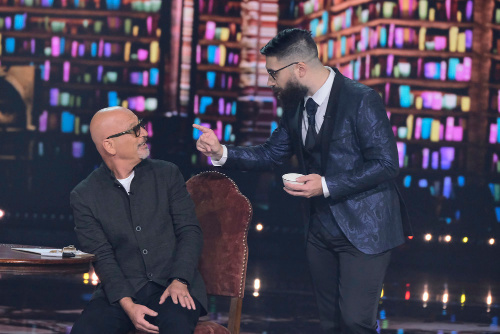 Peter said this time on AGT, he’s got a strategy.  Peter also said his dream was to be in a Vegas show and his first time on AGT season 16 gave him that.  He’s a 33 year-old mind reader from London.  Peter lost out to Josh Blue on AGT in the Semi-Finals.  He said he’s gotten a lot of fans who come to see him because they saw him on AGT.  He hopes that this All-Star performance will win Simon back over.

Peter’s act involved reading the minds of host Terry Crews and judge Howie Mandel.  A random member of the audience also joined them.  He used a tea party type of scenario.  They all sat at a table with tea cups.  Peter was able to tell Howie what he had written about his son Alex on a piece of paper.  He also read what the audience member plans to name her unborn child after placing her finger in the cup of tea then Peter drank it.  As Peter was trying to read Terry, Simon pushed his “X” and threw Peter off.  Then Peter was able to come through with the correct shoe size (he was trying to get) from Terry.

Simon said it’s not always about the finish, it’s about how you get there.  He said “it takes too long and it’s his lack of showmanship.”  Heidi and Howie disagreed.   Howie said what Peter did was “like a super power.”  He thinks his act is worthy of the Finals.  Heidi told him she loves him and is so grateful he’s back. 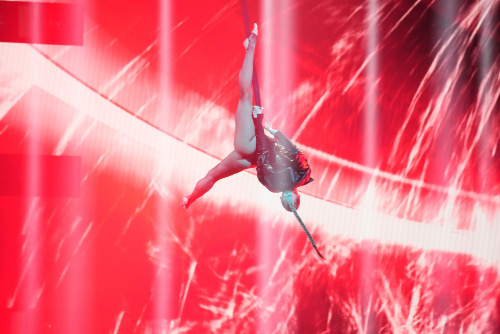 Viviana competed in AGT season 17.  She was unable to make it to the Finals due to her past injuries.  In that season, she performed with water and in (and above) a bathtub.   She’s from Spain and always wanted to be the most famous gymnast in the world.  Viviana gave an unbelievable performance that included fire on the AGT: All-Stars stage.

Howie said that looked incredibly dangerous and she burned the building down.  Heidi said she’s a huge fan of hers.  Simon reacted that there’s no question she would have made the Final last year.  She said her dream is to win AGT: All-Stars.  Simon said there’s something about her showmanship which is spectacular.  He said right now she is the one to beat. 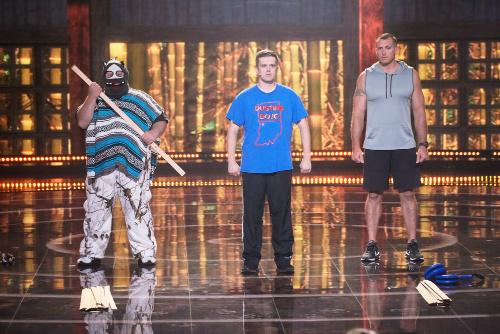 Simon gave them his “X” right away.  After they finished their act which was full of half-baked stunts and fumbles, Simon said he had nothing to say.  Heidi also gave them her “X.  She said she still doesn’t get it.  Simon said it wasn’t karate, “it was crappy.”  Howie said it was notorious and he would “go see this movie.” 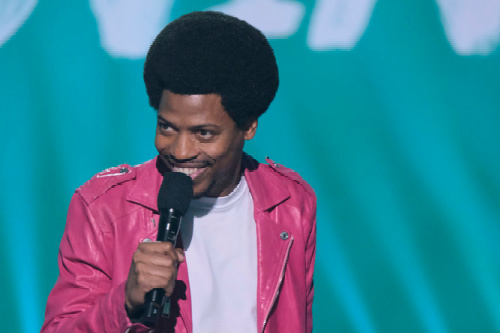 Mike was a finalist on AGT season 17.  He said he’s been doing stand up for close to 20 years, and he’s seen what AGT does for all their artists. He felt that it was a good lane for him to step into.  Mike lost out to Drake Miligan in the Finals.  He said he’s been working non-stop since being on AGT.  He’s even been too busy to take Howie up on his offer of opening his show for him!  Mike said he gets his material from his family.  Mike said he wants the title of winner and intends to “take everybody out.”

As soon as Mike came out onto the stage, he got a standing ovation.  Mike said he wants to be the first comedian to win and that’s why he’s back. Simon said “good.” Mike’s routine on AGT: All-Stars was mostly about his step-son, a.k.a. “step man.”  After his act, Simon gave him the thumbs up and a standing ovation.

Heidi told Mike she loves him and he’s hilarious.  Simon said if he had done that routine in the Finals, it would have been a completely different story.  Simon said he can see in Mike’s eyes how badly he wants this.  Mike said he does and he’s there “to play.”   Simon said he loves people who compete and he wasn’t expecting to do this, as he got up and gave Mike his Golden Buzzer!

At age 28, he traveled around on “adventures” doing his magic.  In 2022, he went on Britain’s Got Talent season 15 and got the hosts’ Golden Buzzer.  During this act on All-Stars, he magically made a tight knot that was tied by Howie and Simon disappear, and he levitated a metal ring on stage and placed it on Heidi’s finger while he was blind-folded.

Howie told Keiichi that he was amazing!  He asked how far he went on Britain’s Got Talent, Keiichi answered the Semi Finals, but he wasn’t the judge’s choice.  Simon winced because he was one of the judges.  Simon said Keiichi has a personality and people are going to like him.  “Let’s see what happens.” 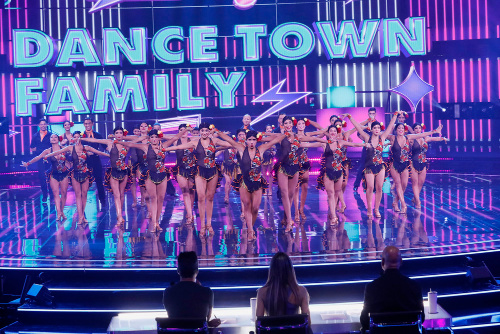 The last time they competed was 2020 on AGT season 15, and they weren’t able to dance in person due to Covid restrictions.  They said they’re glad to be back.  They said since AGT they danced with Jennifer Lopez at the Super Bowl because they saw them on AGT.

Heidi said it was good and she loves them.  Howie said it was above and beyond anything they’ve seen them do on their show before and Super Fans are going to love them. Simon said he’s normally not a fan of this act however, “this was exceptional.  It was everything an All Star should be…brilliant, competitive, courageous, and better the second time we see you and you are.”

She’s the winner of Dominican’s Got Talent season 2, in 2021.  After her win, she was in commercials, TV shows, and got to sing in front of the president of her country.  She went on AGT: All-Stars so everyone can know who she is.  Keren sang beautifully and got a standing ovation.

Heidi said Keren has a real shot in this competition.  Howie said he loves her range from soft spoken to when she belts it out.  Simon said the talent they’re seeing from all over the world is “actually astonishing.”  He advised her to find a song and turn it into “your unique version.”  He said he liked it but sometimes, “you have to do something that no one’s ever done before.”  The audience started to push-back at Simon.  He said he’s trying to be constructive.

Captain Ruin was on season 9 of “Australia’s Got Talent” and made it to the Semi Finals. He started throwing knives in his backyard 7 to 8 years ago.  He said he’s a “punk rock daredevil.”  He had an 800 pound piano dangling above the stage.   His stunt was he had to throw knives at a bullseye target in front of a balloon which if popped, would release the piano onto the stage.  The judges were bored and could see that there was no real danger in his act.

Simon gave him his “X.”  The act proved to be NOT very dangerous.  Simon said it was a lot of build up and not much delivery and his target should have been smaller.  Howie said “this needed an edge.” 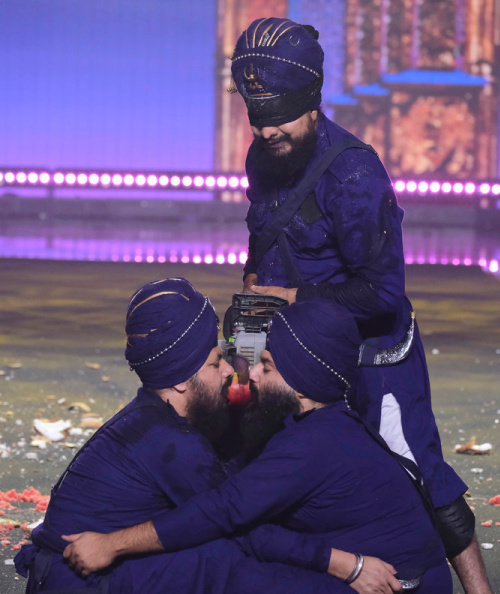 Bir Khalsa were on AGT season 14 in 2019 and made it to the Quarter Finals.  They are from India.  The manager of the group joined them on stage.  He said he wasn’t with them before.  But, after AGT, they’ve performed all over the world.  They said “this is a big opportunity” for them.  Their All-Stars act consisted of stunts such as one of them having salt poured over his eyes, then blindfolded, then aimlessly striking coconuts, and watermelons around one of them laying on the stage.  The last stunt was this same blindfolded man running a chainsaw between two others holding an apple in their mouths.

Howie said by far, it was the craziest thing he’s ever seen.  Heidi called it “exhausting” and she couldn’t look away.  Howie said he was on his feet and trying to run out of the building.  He said they topped what they did, and it was the most insane moment.   Heidi told them about when Simon “adjusted their nuts (coconuts) before they came onto the stage.  Luckily, it didn’t affect their act!  Simon said it was one of his favorite performances. It was “mad and chaotic.”  He said he loves how they almost died and the manager came out to take a round of applause.  He said if it was up to him, they would get his vote.