After a long hiatus of two weeks off from “The Bachelor” season 26, episode three, picked-up from the dramatic cliffhanger which had everyone wondering, would Clayton take Cassidy’s rose back?  That was soon answered as Clayton worked to diffuse the fire and get Cassidy’s side of the salacious story which was brought to his attention by Sierra.

Sierra rejoined the group of girls and told them about Cassidy’s “friends with benefits” situation at home.   All the women were shocked and turned on Cassidy, especially since Cassidy was given the Group Date Rose.  Kate said Cassidy is “grinding everyone’s gears.”

Sierra said she hoped that Clayton would be able to see through it and call Cassidy out.

Clayton told the news to host Jesse Palmer.  In the meantime, Cassidy was trying to convince the women and herself that she deserved to be there, saying, “Clayton likes me.  You can waste your time talking about me if you want.”  And, “I have a f– rose.  He clearly likes me.  What are you going to do?”

Clayton pulled Cassidy out from the group of women and asked her if she’d been seeing someone before she came there to “The Bachelor” show.  Cassidy was flabbergasted and thought the conversation was going somewhere else.  She responded that she hasn’t talked to anyone that she’s serious about having a relationship in “a very long time.”  Then Clayton called her out.  Cassidy explained that she does have a friend who’s not interested in a relationship.   She went on the show to see where it goes  But, the guy basically doesn’t want Cassidy as she explained it to Clayton.

After a brief break, Cassidy and Clayton reconvened and said that she fell for him the moment she met him.  Clayton said they had “a genuine connection.”  He said when he was coming to her he was trying to find out what was behind the story.  He told her he’s “struggling” with their trust already being “shaken.”   He explained that at that point “there’s too many concerns.”  Cassidy asked “are you sending me home?”  She explained that there’s no other woman who glows after speaking to him… and a lot of those women will be going home.  Clayton proceeded to walk Cassidy out and put her in a van to leave.  There was no exit interview from Cassidy!

Clayton said being able to trust somebody and sharing your ear.  Serene said “the poison is gone…hopefully.” Sierra worried that she was “tainted” because she was the “bearer of bad news.”  Clayton told the group that it made him sick to his stomach that he had to take back Cassidy’s rose.  He felt it was in the best interest for her to go home.  Another problem – the drama took up a lot of time and Clayton was not able to talk to most of the women during the Cocktail Party.

Before the return of “The Bachelor” from the commercial break, the show gave a warning that “this segment contains sensitive content.”

The women were hoping that with Cassidy gone, it would “lighten the mood.”  Host Jesse forewarned the women to take advantage of their time with Clayton because you never know when it’s the last time you see him.  Jesse announced that there would be three dates this week:  two group dates, and one “amazing romantic one-on-one date.”

They met Clayton at an auditorium in Hollywood where former Bachelorette Kaitlyn Bristowe was there.  She told the women that Clayton is one of the sincerest and genuine men she’s met on the show.  They all sat in a circle and Bristowe explained that they’d have to be vulnerable.  She read a series of statements and if they related, they were asked to stand-up.

The only statement that was aired was,  “stand up if there are some parts of yourself that you’re not proud of. ”  All of the women stood-up.  Clayton went first.  He explained that he wished that he had torn down some of his walls in past relationships.

Marlena brought up that she never intended to talk to Clayton about race. She reacted that she has always had to work extra hard because of the color of her skin.   But, Clayton reacted that he doesn’t want her to feel that she can’t talk about race.  He said there are struggles that he has and deals with that aren’t apparent.  He said he hated how he looked when he was younger.  In seventh grade, he lost 15 pounds, and was constantly comparing himself to other guys and their abs.  He turned his weakness into a strength and now loves who he is.  Susie said she was shocked and had never heard a man talk about himself in that way.

Clayton said it was the best date so far and he hoped that it would carry-on to the After Party.

Clayton told the women that those conversations really push the relationships forward.  He said he loves that the group of women have opened-up and wished that he could give them all roses. Serene was the first woman to pull Clayton in private to talk to him.  She explained to Clayton that it’s harder for her to talk about her feelings in public because that’s not how she grew-up.  Clayton could relate because it was the same for him as well.  Clayton also told Eliza that he was thankful for her being there because he really likes what he sees in her.

Susie was the next woman to talk to Clayton in private.  She said she thinks she has a strong connection with Clayton.  She liked that she could connect with Clayton based on how he opened up about his body.  Susie said in her confessional that he’s “definitely somebody I could fall in love with.”

Back at the mansion:  The next date card arrived.  The card read, “Sarah, falling in love is full of surprises. Love Clayton.”   Rachel reacted that everyone there wants one-on-one time with Clayton, but she was happy for Sarah.  Shanae didn’t get it.  She thought everyone was being fake.   And this is a competition.

Back to the After Party:  Eliza told Clayton that she feels safe around him and she’s thankful for him.  Clayton loved how the women continued to be vulnerable throughout the evening.  The group date rose went to Eliza.  Clayton said because she goes above and beyond during every interaction.

Sarah and Clayton arrived in downtown L.A. where they were greeted by Becca Kufrin.  They had the task of getting stripped down to their underwear.  They had a slew of other challenges that included singing.  Sarah was surprised at how comfortable she felt around Clayton as the goofed-off in front of strangers.  She managed to put together a simple rap that impressed Clayton.

Back at the mansion:  Elizabeth cooked shrimp for all the women.  Shanae proceeded to eat them all.  Of course, that got Elizabeth worked-up and ticked-off at Shanae.

Back to Clayton and Sarah: Sarah liked that she got to see Clayton as a person.  She told him that she likes that he’s not a guy that tries to show-off.  Then, Sarah shared that her parents adopted her.  She’s 30% Vietnamese, French and Irish.   Her biological parents had her when they were 20 and couldn’t raise her.  She said she was resentful at first, and it took her a while to feel and accept her adoptive parent’s love.  Clayton said he never wanted to make her feel that way.   Sarah said one of the best things is coming onto the show and meeting him.  When Sarah told Clayton that he deserves to fall in love and find his person, it almost seemed that she was about to self-eliminate.  However, thankfully, it was not the case.  She said he’s really special to her already and it’s “really cool.”

Back at the mansion:  The group date card arrived:  Gabby, Rachel, Kira, Melina, Lyndsey, Sierra, Teddi, Elizabeth, Shanae.  “Loves the beach…love Clayton.”   Elizabeth and Shanae hated that they were on the date together.

Back to Clayton and Sarah:  Clayton told Sarah that she exceeded all of the expectations on the date, and gave her the date rose.  Clayton said they grew a lot and took their relationship to the next level. He wants to give her his all, because she’s doing that for him.  Then they danced to a live orchestra.  Sarah said in her confessional that she thinks it’s the beginning of her and Clayton falling in love.

Elizabeth was hoping to regain her footing with Clayton after Shanae tarnished her reputation during last week’s group date.   “Baywatch” star Nicole Eggart greeted the women and told them that they’d be trained to be lifeguards.  But, first, they’d have to “look the part” as they ran off to get changed into “Baywatch” swimsuits.  Their first training was to perform CPR on a dummy.  Next, the ladies had to master the famous “Baywatch” slow-motion run on the beach. 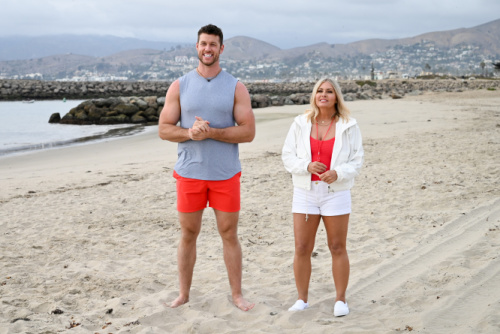 It was super cringey when Shanae followed-up her slow-mo run with a long make-out session with Clayton as the women awkwardly looked-on.  Nicole awarded Gabby as the winner of the “Baywatch” lifeguard challenge.  Shanae was pissed.

Clayton thanked the women for a great date and loved how they “leaned into it.”  Rachel was the first to get one-on-one time with Clayton and was looking for validation from Clayton.   He told her that he always looks forward to seeing her and there’s “Something special” between them.  Rachel said Clayton makes her feel like the only girl there.

Gabby was next.  Clayton told Gabby that he loves her quirkiness.  She said the other girls thought “quirky” was her only side.  Gabby pulled a smooth move when she brought aloe to rub on his sunburned back which required him to take off his shirt.  Clayton was feeling a strong connection with Gabby.  Then it was time for Shanae to spend time with Clayton!

Then it was Elizabeth’s turn to talk to Clayton.  Of course, he told Elizabeth about what Shanae said.  Shanae felt that her mental health was waiving because of her interaction with Elizabeth..  Elizabeth was brought to tears trying to defend herself to Clayton, who was left confused.  He advised Elizabeth to “hash it out” with Shanae so that the issue could be resolved and they could move on past it all.

Then the kicker – Shanae also told Clayton that Lyndsey had been bullying her.   Elizabeth and Shanae had it out briefly before Clayton arrived to give out the group date rose that went to Gabby.

Clayton addressed that there “was a lot brought to me,” and he’ll address it tomorrow (at the Cocktail Party).  The women were worried that they’d again not get any time with Clayton because of the drama which would spill over into the Rose Ceremony (next week)!